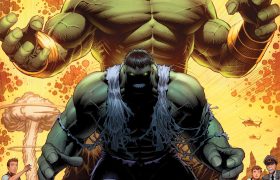 The Earth will tremble under his jade fist! Almost 30 years after the landmark story Future Imperfect, legendary INCREDIBLE HULK scribe Peter David returns to the far-future version of the Hulk known as Maestro – the master of what remains of the world. With astounding art from HULK veteran Dale Keown and rising star Germán Peralta, MAESTRO […] 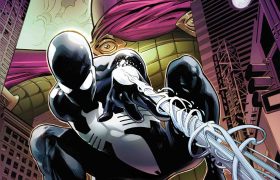 Peter Parker. The black costume. The sinister secret called Venom. This April, comic legends Peter David (Ben Reilly: The Scarlet Spider) and Greg Land (Domino, Hunt for Wolverine) team up for an all-new tale that will explore Peter Parker just before he learned that his infamous black suit was an otherworldly evil symbiote!  “VENOM may […] 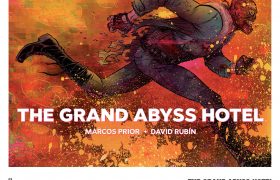 BOOM! Studios announced THE GRAND ABYSS HOTEL, a timely original graphic novel set in a world where big business and fake news manage social order until a rebellion breaks out. Arriving in stores May 2019, writer Marcos Prior and Eisner-nominated artist David Rubín (The Hero, Rumble, Battling Boy: The Rise of Aurora West) weave a politically […] 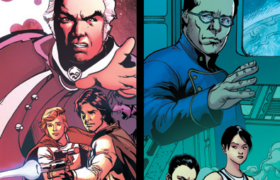 Dynamite Entertainment is proud to announce the ultimate Battlestar Galactica series that’s been nearly 35 years in the making – The Classic Battlestar Galactica team Vs. the New ones from Ron Moore and Sy Fy Channel!  THE crossover project bringing together the continuities of both the classic 1978 and reimagined 2003 BSG series. In the […] 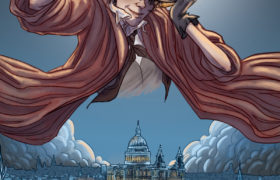 Artfully Done Writer: Adapted by Nicole D’Andria from the Peter David novel Artist: Laura Neubert Published by Action Lab Comics  Peter David will not be Tryke Kemnitz‘, straight man. Tryke has written him demanding that he do so many times over the years, and David has steadfastly replied with a simple and terse “no.” I […]

This April, one of the most controversial characters in Marvel history returns to don the mask (and hoodie!) once more. Today, Marvel is pleased to present your first look inside BEN REILLY: THE SCARLET SPIDER #1 – the new series from New York Times Bestselling creators Peter David (Amazing Spider-Man, Spider-Man 2099) and Mark Bagley […]

Hulk is the strongest there is! Now, he’s the smartest, most calculating, ruthless villain there is too! This June, ask yourselves – can anyone stop the Maestro? That’s the question when the oppressive lord of Dystopia comes to Battleworld for FUTURE IMPERFECT #1! Legendary writer Peter David returns to the nuclear ravaged wastelands he made famous […]

It’s been called the definitive work on military strategy and tactics. Sun Tzu’s seminal Art of War has influenced warfare for hundreds of years. From battlefields to Boardrooms and beyond, there has never been a work more important when it comes to strategy and preparation. Until now! Today, Marvel is proud to present your first […]

This September, Stephen King’s fan-favorite Dark Tower epic returns to Marvel for an all-new beginning in THE DARK TOWER: DRAWING OF THE THREE – THE PRISONER #1! Today, Marvel is proud to present your new, lettered look at the highly anticipated first issue. New York Times Bestselling writers Peter David & Robin Furth along with critically […]

Marvel, in collaboration with Stephen King, is excited to release a FIRST LOOK at color art of the newest chapter in the Dark Tower series – DARK TOWER: THE DRAWING OF THE THREE – THE PRISONER #1. Beginning in September 2014, New York Times Best-Selling writers Peter David & Robin Furth along with critically acclaimed artist […]