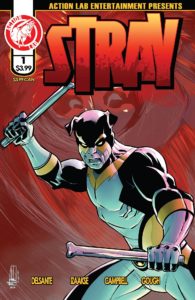 From the ashes of the Actionverse, STRAY is back! New York City is on the brink of a civil war, and only Stray can stop it! What threat from his past has come back to haunt him, and what does the formation of TeenAegis have to do with it? Join as as we look back at “The Rottweiler Years” and introduce artist, Lee Gaston, to the Actionverse! 80’s Homage variant cover by Sean Izaakse and retailer incentive cover by David Golding (Infested Earth)!
———-

As many great superhero comics do, The Stray starts us out in the middle of a rooftop chase, former sidekick Rodney Weller, aka Rottweiler, aka The Stray in hot pursuit. Rodney’s been working to grow out of his image as the childhood sidekick to his super hero father, The Doberman, but is still dogged (heh) by the past he can’t escape. In fact, the clues to his current misadventure could be found in his early days as the leader of TeenAegis.

I discovered Action Lab’s world of good old fashioned superheroes back when I read their Actionverse crossover event last year. Since then, I’ve been backtracking to catch up on the awesome cast of characters presented in those pages, with heavy focus on the “street level” heroes (think the likes of Daredevil, Power Man, and Iron Fist). Most prevalent in that group is The Stray. As a “legacy” hero, Rodney was destined to take up membership in Aegis, the premiere super group of which his father was a member in good standing. That has yet to happen, as there was a falling out which pushed Rodney away from the life of the superhero. When his father was found murdered, Rodney came out of his short-lived retirement to find the killer (Who Killed the Doberman?). Now Rodney’s taken up the identity of The Stray, continuing to fight crime while leaving the more cosmic adventures to his former mentors in Aegis. Rodney’s run across a bit of a mystery, and it’s going to force him to think back on his early days as the Rottweiler (“Rotty” to his friends) in the hopes that it brings him some answers.

As a story told in two parts, The Stray’s inaugural issue, the result of a successful Kickstarter campaign, works great as an introduction to the character. Vito Delsante does a fine job of presenting Rodney as a conflicted young man, trying to forge his own path while getting dragged kicking right back into his father’s shadow. It’s a conundrum that may not be something new to comics, but it is something that seems to be handled with a little more depth here. Rodney has more to get over than his father’s legend. He’s also a son who never got the chance to make amends with his dad before his death, and that gives the whole story a little more weight. That weight would be completely undermined by the miraculous return of Doberman, so here’s hoping that Delsante and Action Lab fight off the urge that seems to plague DC and Marvel.

On to the art… because no comic book is complete without it, and all too often I see other reviewers on other blogs giving nothing more than a recap of an issue, with nothing more than the briefest nod to the work of the artists. Normally, I’m not a fan of having multiple artists and styles involved in an issue, especially in a case where the two styles are as different as they are here. Sean Izaakse, with more of a classic and dynamic spin on his superheroes, and Lee Gaston, who gives a little more of an abstract turn, couldn’t be much more different in their work, but it works just fine here because we’re really seeing two different stories. While we start out in Rodney’s current life, with Sean Izaakse manning the artistic helm, we end up in an extended flashback, where Lee Gaston takes over in Rodney’s early years as a young sidekick assembling his own team of (dare I say it?) teen titans. With two separate stories being told, the two styles work out just fine, each with its own strengths and distinctive look.

So yeah, I’m recommending The Stray’s ongoing series to anyone who enjoys action-filled heroics with sort of an old-fashioned sensibility. And lest you think I’m just blowing smoke, let me assure you that I’m not just a reviewer… I’m also a backer (Kickstarter, that is) 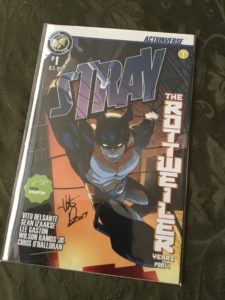 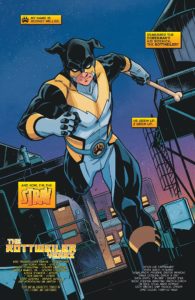 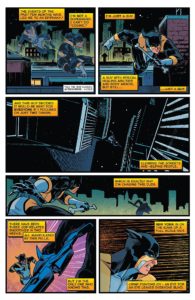 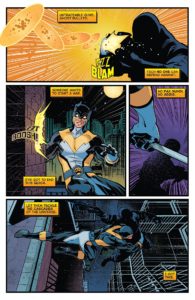