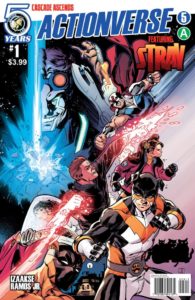 Cascade makes his move to power up his portal engine…which will destroy our world! Jake has teamed up with Medula. Has the entire world gone mad?? Molly, Virtue, Stray and Midnight Tiger are running out of time to save this, and every, universe!
———-

It’s an old story. A villain from an alternate dimension, Malice, plots to gather the power that he needs to return home. Assuming the identity of Cascade, he’s pooled the resources to open a portal and gets his goal in sight. Opening that portal, however, will result in the complete destruction of this Earth. We’ve seen it before, and it always ends up on the big crossover event, all of the heroes coming together with a common goal despite their fundamental differences.

In Actionverse #5, we follow the combined efforts of Stray, Virtue, Molly Danger, and Midnight Tiger in their bid to save the world. The core element of this team up, for this issue at least, is former sidekick turned superhero Rodney Weller. As a “legacy”, Rodney inherited his abilities from his father, the hero known as Doberman. Having grown up as the sidekick Rottweiler, “Rotty” for short, he’s taken on the role of full-fledged superhero as Stray. Now, armed with regenerative abilities that allow him to recover from virtually any injury, and an as yet not fully explored empathic power that projects fear to his enemies the angrier he gets.

My first thought after reading this issue of the Action Lab cross-over event was, “why the hell have I not been reading these books”? Action Lab has produced some outstanding titles that have, as happens with smaller publishers, flown right under the radar. That hasn’t discouraged them in the least, and could even be working to fuel their creative fires. Now with Actionverse, their first full on crossover event, they’ve taken those creative fires and fleshed out their world.

First and foremost, I’m going to climb out on a pretty solid limb and say that the writing in this book is what sets it apart from many other books. The characters all seem to be very well settled into their respective roles, everyone holding to their distinctive personalities as they scramble to avert the destruction of their world. Not to say that there isn’t some fun to be had. I’m going to point at Midnight Tiger as a standout character, due mostly to some dialogue that pays homage to his place in the comic book medium. First, he looks at one of his colleagues, newly outfitted in some slick looking armor, and asks if he’s trying out an Iron Man cosplay. Next, when faced with the questionable help of known villain Medula, he points out “If comic books and TV have taught us anything, it’s that brains in jars are rarely good guys.” These pieces of meta-dialogue, not quite breaking the fourth wall but definitely giving it a poke, served to bring the whole book together as an entertaining read.

The artwork is well done, crisp and clean (with no caffeine), presenting the action without a lot of clutter to confuse things. I like the character designs, giving them an almost visual delineation in power levels… of course Virtue, the most powerful of the group, would have a cape. As pointed out by Midnight Tiger, “capes are cool.” The visual style brings the elements together very well, without going over the top by peppering the landscape with excessive muck. Where some of the character designs might seem a little on the clichéd or corny side, it all still works inside the Actionverse framework.

This is all made even more impressive when considering that Sean Izaakse is pulling double duty as the writer and artist on the title. Granted, there isn’t any of the back and forth as multiple team members collaborate to fit narrative to pictures, but considering that the vast majority of comic books out there have a minimum of two carrying the workload, this seems like a feat of creative might seldom seen in the industry.

There really are a lot of small independents out there who could benefit from the sale of an extra issue or two, so if you’re looking for something new to read, do yourself a favor and consider exploring the Actionverse. Guys like DC and Marvel will still be there when you get back.

Now I have some back issues to look up… See ya! 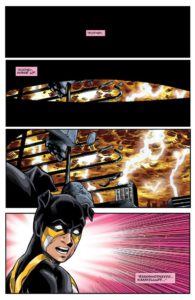 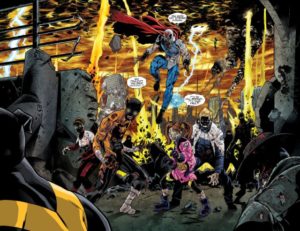 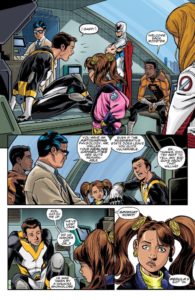