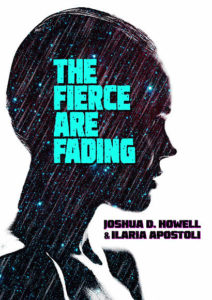 The Fierce Are Fading is a 200+ page science-fiction/thriller which follows a troubled and tired FBI Agent Riley Harper, who is a floater agent on assignment in Seattle to assist the local Police Department in finding a serial killer. Agent Harper and her partner, Officer Peter Drake, stumble upon something much bigger than a simple killing spree. Things go wrong and Agent Harper loses her partner, but circumstances lead her to believe that Officer Drake is alive and being held captive by a shadow organization. Scorned by the agency, Agent Harper embarks on a mission to uncover the mystery of this secret organization known only to a few as THE M.O.R.S. INITIATIVE.
———-

In this independent sci fi thriller, FBI Agent Riley Harper has been assigned to assist the Seattle Police Department with the ongoing hunt for a believed serial killer. After multiple disappearances, the joint task force has tracked Harold Jensen, a substitute teacher in the area, to a remote location where he’s holed up with his latest victims. Injecting both with an unknown substance, one dies (pretty horribly), but the second survives. Before the significance of this can be explained, Jensen is interrupted by Harper and Seattle PD Officer Pete Drake. In the chaos that follows, Jensen is shot multiple times and believed dead. But this is a science fiction story, so that’s not gonna stick. Before the body can be secured, Jensen gets up and triggers an unknown device. Moving to intervene, Drake tackles Jensen just as the device is triggered, resulting in an impressive green burst of energy that leaves no trace of the policeman, and nothing but the lower half of Jensen’s (now most definitely dead) body.

Now Agent Riley Harper is left with a mystery, and is put on “administrative leave” so she can pull herself back together after the tough assignment. And then the phone call comes…

Pete has found himself mysteriously in Nebraska, in a very top secret looking, heavily guarded installation. As he attempts to make his escape, he runs across a logo that identifies the installation as belonging to something called the “M.O.R.S. Initiative”. If it’s got an acronym like that, it’s gotta be sinister, right? So long story short (This graphic novel is resting at around a hefty 200 page count), Pete makes his way out of the base, gets to a phone, and calls Riley. He has about enough to time to tell her where he is (Nebraska), and mentions M.O.R.S. before being snapped up by the secret organization again.

Deeper and deeper we go… Riley refuses to leave the investigation alone, contrary to the orders of her superiors, and starts digging into Pete’s whereabouts. As she’s puzzling over how he went from Seattle, Washington to Nebraska, she runs across some news articles that pique her interest. In particular, she finds an old unsolved murder case in which a man claimed that his father was killed by a female assassin who, after the murder, teleported away from the scene in a flash of green light. Hmmm… Road trip!

This graphic novel carries a pretty deep premise, to support the need for the page count, and it moves along pretty fast. You’ve got all of your classic elements for sci fi noir: a shadowy organization conducting strange experiments; an unsolved murder; teleporting assassins; a renegade FBI Agent on a mission. While some of the details do come fast and furious, there’s definitely a story here for anyone looking to invest in a read that’s more involved than the average comic book. And I don’t know what it is about the artwork that catches my eye… I think I kinda like the “rough” look to it, where you can see the sketch lines still in the finished product.

All in all, this is obviously a labor of love, and should find an audience out there. Take a look at the pages post below. If you like what you see here, you can see more of Ilaria Apostoli’s work at her deviantart page (check the link above). 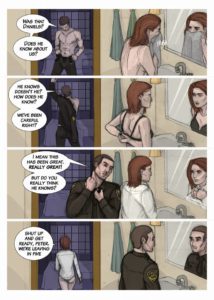 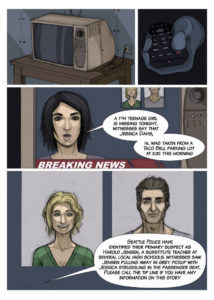 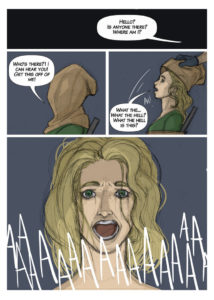 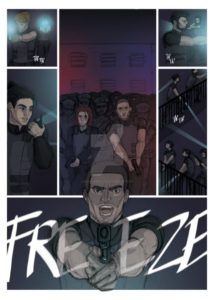