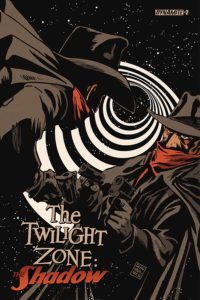 The Twilight Zone: The Shadow #2 (of 4)
Dynamite Entertainment
Written by David Avallone
Art by Dave Acosta
Colors by Omi Remalante
Available May 18th!

Picture if you will: in your own world, you’re a fearsome crime fighter who stalks the night. But you wake up today in another world, where the fearsome crime fighter is just a character you play in a radio show that bears his name. You are no longer a man with a mission, just a 22 year old prodigy with an impressive voice, and a lot of questions… an honored guest who has been invited into… the Twilight Zone.
———-

Having run with multiple stories featuring The Shadow, including long and limited run series, Dynamite has now taken a different direction for the character. Having been featured in everything from pulp fiction adventure stories and comic books to radio dramas and movies, the Shadow has experienced more incarnations than the average fictional character. In print his true identity was Kent Allard, who occasionally used the identity of Lamont Cranston as a disguise. On the radio show, and in movies, mild mannered playboy Lamont Cranston was his true identity. Never let it be said that Dynamite would let such a long and complex backstory go without having some fun with it…

In the first issue, we saw the Shadow, aka: Kent Allard, taking down a group of armed Nazis, right here on American soil. Margo Lane, longtime ally of the Shadow, takes issue with some of his tactics and the apparent lack of restraint or compassion he shows while in action. Leaving the scene of this latest altercation, the argument continues as Margo expresses her concern over Kent’s apparent lack of regard for collateral damage. Allard maintains his view that anyone making the conscious choice to stand with evil, in any of its forms, doesn’t deserve mercy. The debate goes without resolution as their car is hit by apparent mortar fire, presumably from the Nazi camp they’d just left.

Regaining consciousness, Allard is faced with a puzzle. Apparently safe and sound in the Shadow’s sanctum… his sanctum… he finds himself face to face with the Shadow, and the Shadow wants to know what the hell Lamont Cranston is doing in his… the Shadow’s… hideout! It becomes quickly apparent, and maybe a little too quickly accepted, that Allard has found himself separated from his crime fighting alter ego and deposited fully into the persona of his Cranston alias. Trying to sort out the details of what how this might have happened, he seeks out Margo Lane, who also knows him only as Cranston. The discussion is cut short by an attack from the Shadow’s mortal enemy, Shiwan Khan. In the chaos that ensues, Allard/Cranston finds himself bounced once again from one reality into another, and this time he ends up in front of a mirror. Looking back at him is the face of Preston Springs… the actor whose voice is responsible for bringing the Shadow to life on the radio!

This brings us into the second issue of the series, and I’ll tell you that it only gets more twisted and convoluted from here. Still believing himself to be Kent Allard, the Shadow, yet faced with the apparent reality that everything he knows is nothing but the subject of popular radio drama and pulp magazines, one thing is obvious. Our hero has found himself lost in a dimension not of sight and sound, but of mind. Kent Allard has entered… the Twilight Zone.

When I got the first look at this series from Dynamite, I had no idea what the hell they were going to do to bring these two properties together. It isn’t like the Shadow can fight the evil of the Twilight Zone, and while the roots of both can be traced back to origins as sub-genres of science fiction, these two franchises really couldn’t be more different. The Shadow battles evil in all of its shapes and guises, using mystery and fear as weapons against the criminal element (they are a cowardly and superstitious lot, after all…). The Twilight Zone has been presented as an anthology series, using elements of sci fi to conceal, and reveal, social commentary. There is no way could the two work in together, right?

But wait. Back in the first issue, the Shadow was being faced with the accusation that he’d neglected Kent Allard, that Allard was no longer the “true identity”. He had become, first and foremost, the Shadow, and Allard had simply become one of the many masks that he wore from time to time. With that in mind, what we have now is a character play in which we’re faced with questions of identity. If the Shadow isn’t the assumed persona, if the identities of Allard and Cranston are nothing more than their public faces, how does he cope when he’s separated from what he knows to be true? How does he handle being dropped into a role he only pretends to be?

Now add a layer to that. What happens when the ruthless crimefighter, the one who knows what evil lurks in the hearts of men, master combatant and tactician, is faced with an entirely new reality? A reality in which he’s not Allard, Cranston, or the Shadow, but merely the guy who portrays him on a radio program? Still knowing everything that he knows, assuming he’s not just some dude having a wicked psychotic break, how does the Shadow unravel the mystery and make his way back to where he belongs? Seeing as The Twilight Zone was always better at presenting issues and posing questions than it was at resolving mysteries, there’s no guarantee that this whole story isn’t about an actor, Preston Springs, getting too caught up in his on-air persona, and losing himself in the process.

Kudos to Dynamite for giving the reins over to the creative team of David Avallone and Dave Acosta. So far they’ve done a great job of presenting questions of identity, assumed and otherwise, in a story that has more going on than shootouts and villains.