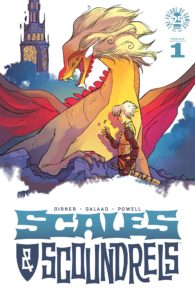 It’s hard to make an honest living in a land brimming with magic and mystery, and treasure hunter Luvander is tired of being a penniless adventurer. Ever in search of gold and glory, she sets off for a fabled dungeon, “the Dragon’s Maw,” an ancient labyrinth, at the bottom of which slumbers endless wealth…or certain doom! But what starts out as a road to riches becomes the first step on an epic journey to destiny, for Luvander holds a secret in her heart that will shatter the chains of fate and bring light to a world encroached upon by an ancient darkness. Writer SEBASTIAN GIRNER (SHIRTLESS BEAR-FIGHTER!) and artist GALAAD are proud to present SCALES & SCOUNDRELS, a colorful and exciting new monthly fantasy adventure from Image Comics, for scoundrels of all ages!
———-

Are you sick and tired of the same old thing? Superheroes flying around beating the crap out of super villains, dropping buildings on them and then going on about goodness and morality overcoming evil and depravity? Yah, me neither. God help me, I love that stuff. Still, there’s something to be said for taking in something a little different now and again. Usually, we at thePullbox like to pay attention to the independents out there, the smaller publishers who seem to be the ones taking risks and breaking out of the ruts established by the Big Guys.

And then every once in a while, one of those “Big Guys” will do something that you didn’t see coming. Like here, with Scales & Scoundrels, the new fantasy series from Image Comics. In this fantasy tale, we’re introduced to young ne’er-do-well and quintessential rogue, Luvander. She’s tired of scraping by, but has no interest in following along with the crowd and doing what’s expected of her. Till recently, she’s managed okay, moving from town to town and making some coin at whatever card game she comes across, lightning quick wits, fists, and feet keeping her right at the edge of disaster and seeing her through. But it’s not enough anymore. She’s ready for the “bigger and better thing”.

The first thing that stands out in this book is the art. Galaad’s style stands apart from the norm, holding to more of a manga style than the standard comic book fare. His characters all carry exaggerated features to help us out in deciding how we’re going to feel about them. Luvander has an almost elven look, with fine features and lighter tones, which sets her apart from the other characters. She’s the outsider wherever she goes, and Galaad makes sure that she looks the part. The artwork also handles the action scenes very well, instilling Luvander with quickness and agility to spare.

Sebastian Girner seems to be working closely with Galaad to craft a world that he hopes will live up to the “epic fantasy” moniker. His narrative moves along well, working on a couple different levels for various readers and their tastes. If you’re just looking for a straight forward action story, you could probably buzz through this title and be satisfied. If you’re looking for something a little deeper, you could do a lot worse than Scales & Scoundrels. Girner has made sure to hold back on some reveals, hinting at deeper levels in the story, mysteries to be discovered down the road.

This is a pretty lighthearted fantasy tale that’s pretty much suitable for anyone. The action is quick, the dialogue is smart, and the violence doesn’t go over the top. The opening issue has presented the barest of introductions into what the creators are promising will be a wider and complex world. 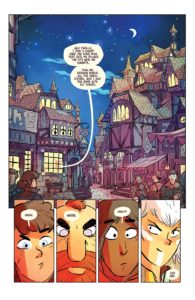 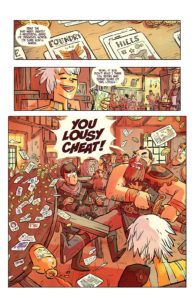 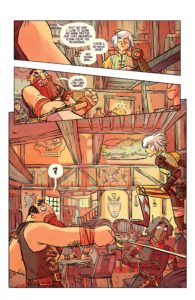