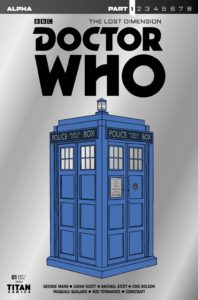 THE VOID HAS ALWAYS EXISTED: ‘NO PLACE. THE SILENT REALM. THE LOST DIMENSION.’ THE ENDLESS, EMPTY SPACE BETWEEN UNIVERSES.

BUT THE VOID IS NO LONGER EMPTY. A SPARK HAS BEEN LIT IN THE EMPTINESS – A SPARK NOW GROWN INTO AN ENTITY POWERFUL ENOUGH TO SHATTER CREATION. THE VOID IS HUNGRY. AND IT IS ALREADY HERE. THIS IS A THREAT BIGGER THAN US.

IT’S MORE THAN ONE DOCTOR CAN HANDLE – AND EVEN THE DOCTORS ALONE MAY NOT BE ENOUGH! THIS IS THE LOST DIMENSION!

Captain Jack Harkness and his current companion Tara have gotten themselves into a bit of a spot, and much as it pains him to do so, Jack turns to the only person he can think of for help. Not just anyone would be able to lend aid when a person’s vortex manipulator goes on the fritz, landing them in the middle of several worlds with dimensional forces pulling in all different directions (the concept of “different directions” holding a new meaning, dimensionally speaking). Calling the Doctor, it’s Jack’s hope that the TARDIS would be able to punch through the dimensional turbulence to effect a rescue. Help does arrive, but not in the form- any form- of the Doctor. Rather a more dynamic figure arrives, piloting a bowship and reassuring Jack and Tara that “saving planets is a family business.”

Hop on over to the Doctor’s chambers at St. Luke’s University. An important phone call comes in for the Doctor, announcing that company will be stopping in for tea. No sooner is the message delivered than the aforementioned bowship crashes down in the middle of the University library. The pilot emerges and proves to be none other than the Doctor’s own daughter, Jenny, cloned from his stolen DNA and carrying on her progenitor’s tradition of leaping without looking. While the reunion is a happy one, it’s cut short by the revelation that though she tried, Jenny wasn’t able to pull Tara and Jack from the gravitational vortex of a white hole.

The Doctor has pulled off many nigh-impossible feats of daring ingenuity, but when dimensions collide even he may have a tough time riding to the rescue. Luckily, this is a crossover event, and the Doctor won’t be alone. He’ll have the Doctor on hand to assist. If that isn’t enough, the Doctor will arrive to lend a hand, and if that doesn’t do the trick, I have it on good authority that the Doctor may make an appearance. In an eight issue story arc, spanning pretty much all of the Doctor Who titles currently coming out from Titan Comics, and including Doctors 9, 10, 11, 4, 12, and…. Look, there’s a lot of Doctors out there, just wandering about the Multiverse, and from this first issue it looks like most of them are going to be putting in an appearance.

Fans of the Doctor(s) shouldn’t have much trouble grasping the concept of temporal and dimensional vortexes, or with the idea of multiple versions of a single Time Lord meeting up and throwing a party. In fact, that’s the kind of thing that gets the average Whovian downright giddy with the possibilities. So far, it looks like all of the essential elements are there, with the Doctors’ (note the plural) particular brand of banter and wit in place. This is a huge cast of characters, so there should be something for pretty much any fan, casual to diehard, to latch onto and enjoy. The beauty of it is that the art team- and boy, what a team it is (see list above)- has done a phenomenal job with each and every character. Adaptations from TV/film to comics don’t always turn out nearly as well as this did, and it will help fans get even deeper into the title as they recognize favorites from the show(s). With every looking and “sounding” like fans would expect, I can see this being a blast for Whovians out there.

Moffat himself couldn’t have come up with something more convoluted… 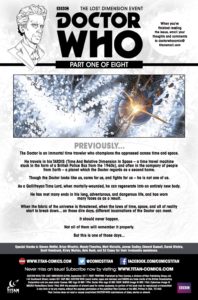 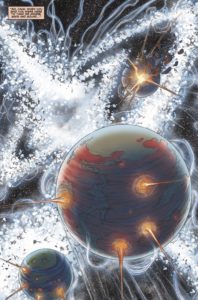 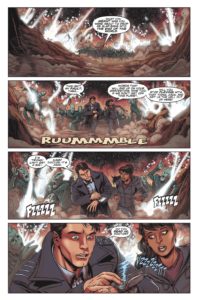 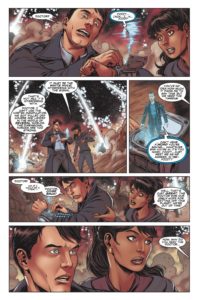 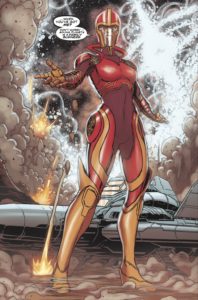 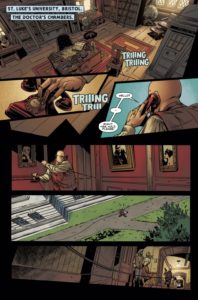 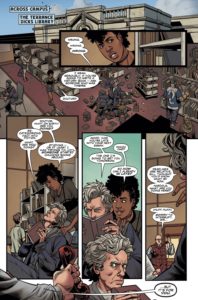 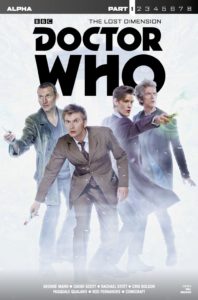 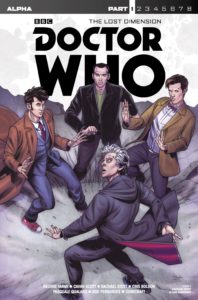