Kill Shakespeare: Juliet – Past is Prologue #4 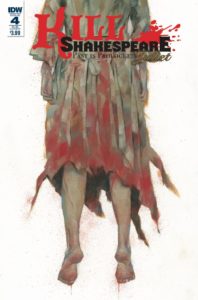 If you’ve read earlier editions of the wonderful Kill Shakespeare, you know that Juliet Capulet is alive and a part of the Prodigals, a team of rebels that is trying to free Europe from the unseemly rule of Richard III. She survived her suicide attempt with Romeo’s dagger and was closely watched by her mother to foil another attempt. Her father goes to war and is assumed dead; her mother remarries Shylock of Venice and he takes over running the Capulet business. When both are murdered in issue #1 of this series, Juliet resolves to kill Cornwall, Richard’s agent in the area. She enlists a drunk warrior in a bar to help her, who turns out to be Othello. Even though she tells him that there is still good in his heart he betrays Juliet, and now she is imprisoned in Cornwall’s house. Cornwall wants to marry Juliet and take over the Capulet fortune and business, which Juliet refuses to do. She will not allow another to control her again.

The story by McCreery has been flawless since the beginning – there aren’t any wasted scenes. He makes Juliet’s journey important both to Verona and to herself. She realizes that she can make one strike, or make a real difference, showing the maturity in grief and life that was missing at the beginning of the arc. The language is a mix of Elizabethan and modern that is easily understood but has a glorious rhythm to it. This is McCreery’s fourth story in the Kill Shakespeare-verse and he wears it like a comfortable travelling cloak.

The art by Howell has a similarity to the other Kill Shakespeare stories, but the expressions on all of the characters throughout this series have been stellar, especially for Juliet. She grieves, is angry, is content or thinking all with the flick of a line. Every panel flows and there are some great moments going from one part of the story to another that are bridged with actions you would see more in movies than a comic, yet they totally work. New colorist Adam Gorham has provided a flawless transition from Shari Chankahamma’s first three issues, using a very similar palette and making everything one story. The covers have been amazing, especially Simon Davis’ painted retail editions.

This just wraps up the whole series so wonderfully, and a better ending to Juliet’s story than Shakespeare himself could have written. 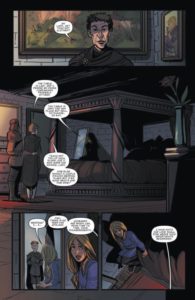 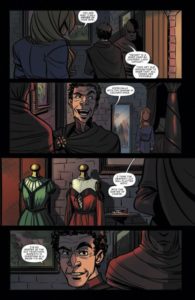 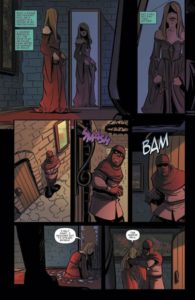