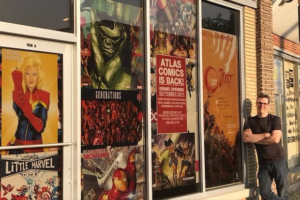 (September 6th, 2017 – Chicago, IL) – Atlas Comics, a fixture of the Chicago-area pop culture retail community for 25 years will return to a new retail space at 5251 N. Harlem Avenue in Chicago, just miles from their old location. The store lost the lease to its suburban Norridge store in 2013 and migrated to online and subscription-only business. After a four year hiatus, Atlas will have its Grand Re-opening from 12:00 – 6:00pm on Saturday, September 30th.

According to Atlas owner John Stangeland, the store will be a little different than it once was. “We were always known as the place for vintage back issues,” he said. “And we’ll still have a deep inventory of classic comics. But the industry is changing, and Atlas needs to do the same thing. That means providing a larger selection of graphic novels in a variety of genres from all over the world, and casting a wider net over the pop-culture landscape. And it means more toys and gaming, too.” In addition, Stangeland promised that the general ambiance of the shop will be upgraded. “I think there will be a little less Tchiakovsky and a little more Ramones,” he said. “The customers have been punished enough.”
Asked why he decided to return now, Stangeland was enthusiastic. “It’s just the right time. I was a little burned out before,” he said, “but I got the itch back. The recent movies have been great, lots of interesting new creators, new publishers – it’s a very exciting time. I want to be in the thick of it again.”

Opening day will feature free comics and giveaways, a sale including thousands of comics priced $1 or less, discounts on vintage back issues, supplies, toys, games and memorabilia, and around the clock music, movies and cartoons. There will also be food (catered), drink (lots of it) and conversation (cheap).

# # #
MORE ABOUT ATLAS COMICS:
Atlas Comics opened in the spring of 1988, just months after the end of Reagan administration. It has witnessed the birth of Image Comics, the death of Superman and the afterlife of Archie. It is acknowledged as one of Chicago’s premiere destinations for vintage back issues, and as long as there are still people who care, it always will be.
Media Contact:
John Stangeland
atlas@acomics.com
708 453-2110