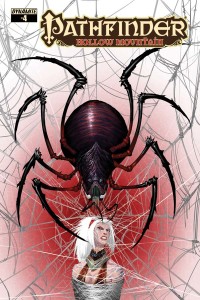 Separated from their allies, Ezren the wizard and Seoni the sorceress face off against rune giants, monstrous spiders, and the deadly dangers of Hollow Mountain’s amassing armies of wrath! Elsewhere in the massive dungeon, Kyra the cleric, Merisiel the rogue, and Valeros the fighter have an audience with the insidious Sinspawn King! Hollow Mountain grows deeper and darker in a tale written by Pathfinder publisher Erik Mona (Pathfinder Origins) and with art from rising star Tom Garcia (Mercy Thompson). Contains pull-out poster map and official Pathfinder RPG bonus encounter!
———-

“With the Castellan’s Key firmly upon his brow, the Demon took command of Hollow Mountain, and all the armies of wrath bent knee to his fearsome command.”

So, a group of adventurers walk into a dungeon…

It might not sound like a great lead in, but anyone who’s ever sat down at a Table with friends and placed themselves into the role of a legendary hero should be able to relate. While Pathfinder the RPG might not be the original dreamed up by Gary Gygax back in the seventies, the great-grandfather of them all, Dungeons and Dragons, it has definitely captured the spirit. What Dynamite has done is take Pathfinder’s game setting off of the Table and placed it in the pages of ongoing comic books.

Issue 4 of the Hollow Mountain finds our party of dungeon delvers split into two groups… something that all experienced players know you just don’t do. One group, led by Kyra [ ], has run head on into an overwhelming horde of hideous creatures called Sinspawn. Creatures born out of corrupted rune well deep inside the Mountain, the spawn have been accumulating, unable to leave by the command of their master, the Castellan. He holds the Key and commands all of the creatures “of wrath” within the Hollow Mountain. Instead of killing Kyra’s group outright, the leader of the Sinspawn has a proposition: Defeat the demon who holds the Castellan’s Key so that the spawn can finally leave their prison.

The other group, led by Seoni [ ], has run into problems of their own. Fresh out of a fight with a golem, they’re a little worse for wear and looking for a break. That’s not gonna happen, as they run into a group of giants. Finding discretion to be the better choice in their current condition, Seoni gets her people on the run to avoid another fight, only to run directly into large spider-like creatures called the Shriezyx. Fearing the worst, the party is relieved to learn that the Shriezyx have a proposition: Being the former masters of Hollow Mountain, but banished by the power of the Castellan’s Key and the demon who currently holds it, the Shriezyx want the adventurers to help them return to their rightful home.

Two different quests, with a single objective: Find and defeat the demon master of Hollow Mountain and his rune magic empowered giants. The dilemma, at least for Kyra’s party, would be that in do so they’d be releasing the army of Sinspawn from their prison, freeing them to raise whatever hate and discontent they have a mind to.

Dynamite has done a fine job of presenting an adventure that any gaming group would be proud to run with. The storytelling is pretty sharp, with the narrative being split between the two groups while still running parallel arcs. At one point, I did have to stop and back up a bit where the narrative overlapped, but once I saw what Erik Mona was up to, it worked out great. Tom Garcia’s artwork does a good job of keeping all nine main characters of the party distinct and unique, and I thought he really excelled at bringing some pretty hideous creatures to the page.

As in many titles that try to tackle gaming properties, whether they be video or tabletop, there are issues. That’s to be expected when a creative team is giving visual form to worlds as thought out and imaginatively detailed as that of Pathfinder. Overall, while it might not be a “natural 20”, this is an awesome title for anyone who enjoys fantasy adventure, but particularly for anyone who knows the meaning of the phrase, “roll your initiative.” 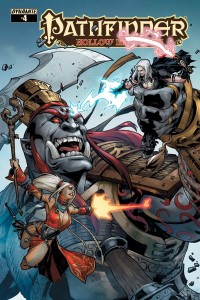 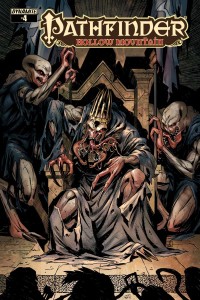