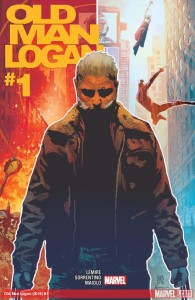 Fifty years from now, Logan — the man who no longer calls himself Wolverine — will have endured many atrocities: The Marvel Universe’s villains will have banded together and rid the world of its heroes. Logan’s closest friend, Hawkeye, will have been murdered in cold blood right before his eyes. And driven mad by the same radiation that gave him his superhuman strength, Bruce Banner will have fathered a family of hillbilly Hulks…that eventually went on to slaughter Logan’s wife and two children. But now, in the present, Old Man Logan wakes up to discover himself in a world before these atrocities, before the Wasteland. And he’s going to seize this opportunity and change history to ensure that his future never comes to pass…

Years from now, the world is run by villains. And Wolverine is no more. He is simply known as Old Man Logan, a farmer with a loving family.

But when the Hulk Gang savagely murders his wife, son, and daughter, Logan is forced to pop his claws once more and take vengeance on the villains who ruined his future.

Coming out of the Big Changes of the Secret Wars storyline, Marvel has given themselves a carte blanche’ to do pretty much whatever they want. So how much fun would it be if they took the popular “Old Man Logan” story, a peek into a very dark post-apocalyptic Marvel Universe, and turned it a little sideways?

Logan’s a pacifist, a farmer, a loving family man… Or is he? A lot of people don’t think a person change what he is at the core, that he might fake it for a while but that the fundamental nature will always come through. So if Logan is the best there is at what he does, and we all know that ain’t farming, what would it take crack his peaceful façade? That’s a pretty simple answer that involves some pretty horrific events.

In Old Man Logan’s dismal future, the villains stopped working as individuals and took up the pack mentality. With their combined strength, and a total lack of morals holding them back, they were able to do what none of them could do alone. The heroes are either dead or broken, scattered across the Wasteland that used to be America, leaving the villains in charge. Logan settled himself into the life of a farmer. He got married, had a son and a daughter, and thought himself clear of his chaotic past. Since that would make for the most boring story ever, his life of peace couldn’t last.

Bruce Banner either lost his constant struggle with his alter-ego, or he just stopped fighting. Either way, the Hulk has carved out a territory, setting himself up as the head of his own little clan, the Hulk Gang. The day that Logan comes home to find his family slaughtered by these gamma-powered thugs is the day that his life of peace ended. In the original Old Man Logan storyline, his tragedy sparked a cross-country odyssey of revenge.

Fast-forward… or maybe backward… and an old man wakes up naked on the streets of New York. He’s confused, having no idea of where he is. One violent confrontation later, and the old man is on the run. Seeking shelter, some answers, and maybe a pair of pants, he starts to put things together. Old Man Logan has been bounced back through time, to before the events leading to the villains’ take-over. All he needs is to make a list, check it twice, and eliminate the key players. Logan can stop the tragedy before it ever happens. And he’s gonna start with a lowlife who calls himself the Black Butcher… not much of a “supervillain”, maybe, but in Old Man Logan’s world the Butcher made the mistake of smacking his son, Scotty.

Old Man Logan could be the beginning of a very cool story… I don’t know what kind of longevity it might have, but just the concept sets us up for some very interesting confrontations. Jeff Lemire has given us a damaged hero who knows that if he can’t make some hard choices, the consequences are going to be off the charts bad. Once upon a time, Wolverine was a savage killer more than willing to put his claws through the brain pan of a bad guy for the greater good. How much farther will Old Man Logan be willing to go, knowing what he knows?

He’s got his list of names. He’s got the knowledge of his past. He’s got several lifetimes worth of experience, and when it comes down to it, Logan has very little to lose.