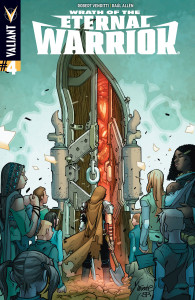 The year’s heart-shattering new ongoing series is about to step out of Hell and into the battle for life itself as spectacular storytellers Robert Venditti and Raul Allen force the Eternal Warrior into the next brutal level of rebirth in a world beyond our own! Featuring covers by David Lafuente (A&A: THE ADVENTURES OF ARCHER & ARMSTRONG), Raul Allen (NINJAK), Marcos Martin (The Private Eye), Clayton Henry (HARBINGER WARS), and Adam Pollina (X-Force), “RISEN” reaches its unforgettable conclusion right here in WRATH OF THE ETERNAL WARRIOR #4 – in stores February 17th!
———-

Gilad Anni-Padda knows better than anyone that eternal life isn’t as cool as it looks in the movies. Hell, anyone who’s ever watched Highlander the series can’t ponder the concept without hearing the haunting “Who Wants to Live Forever” by Queen. But as the Eternal Warrior, Gilad’s version of immortality is just a buzzkill.

Now, I haven’t been a regular follower of the series, so some of what shows up in this issue is new to me. For instance, the hell Gila goes through every time he dies… confronted by the members of his family who have died over the years, determined to find out why he keeps on choosing to go back to an eternity of violence over an afterlife with them. His first son, Kalam, in particular has some pretty intense issues of abandonment. The anger he shows his father, and then the instant regret over that anger that he feels after Gilad’s gone is an emotional spike that’s handled well in this issue.

So there’s emotional turmoil involved in Gilad’s immortality. Now we get to the very literal fight he goes through every time he dies and chooses to return to the land of the living. To come back, Gilad has to pass through the Iron Door. Standing in front of that door is Humongous… No, not the weird BDSM looking guy from The Road Warrior, but a gigantic demon who hates Gilad’s presence in his realm, but is still compelled to hold him in it. The knock down, drag out that follows shows Gilad’s dedication to his duty to our world, his determination to defend it and make it better.

Valiant has a long history of outstanding story telling. Back when they started, they revitalized the “super hero” genre by taking their characters out of tights and putting them into more realistic (yeah, I know… irony) settings and situations. They had issues, real life problems, angst, and regrets. That tradition looks like it’s still going strong.

If you haven’t already, go ahead and take a look at Wrath of the Eternal Warrior. I mean, if Gilad’s willing to wade through the obstacles in his path, all on your behalf, the least you could do is bear witness. 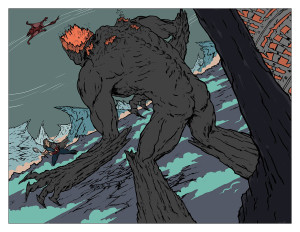 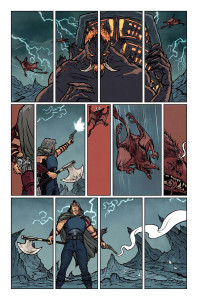 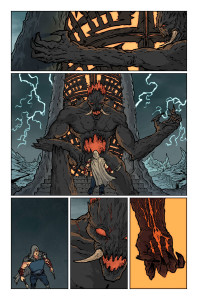