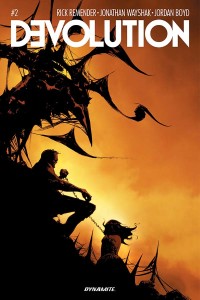 The road to salvation is lined with Nazi hillbillies and Neanderthals. Raja finds that trusting people is a bad idea. Check out the thrilling new series that Rick Remender (Black Science, Deadly Class) describes as “a heavy dose of high-octane action, character drama, a world of strange reverse mutations, and social commentary – as we follow the last tribe of humans inoculated from the devolution agent as they set out on a desperate journey to try to find a way to re-evolve life on Earth.

The first issue in this series sets up the world, how a virus was fomulated to remove beliefs so that people wouldn’t go to war anymore. The virus de-evolved people to an earlier state, making them incapable of pushing organized war, but breaking down civilization. Raja’s father was on the formuation team, and she’s determined to right his wrongs, but on her way to the lab that has the cure stockpiled, she runs into a settlement of men who are happy to be Devos (de-evolved). Now the story really begins.

Rick Remender slaps you in the face with this tale of just how it might be, living in a devolved world. It’s uncompromising and difficult, and sometimes being smart and plucky doesn’t help you. If you haven’t read issue #1, go back and get it. You’ll find that Remender describes a painfully close-to-home world, and a solution that might not have been the best choice. Being only one generation out from devolution, there are still lots of big machines and guns and things that the Devos like, along with a few people who weren’t affected or who were innoculated against the virus. Those that were unaffected had to become very tough themselves to survive. Raja is definitely a survivor, and slowly finds a few people like herself, wanting this kind of world to end.

The art by Jonathan Wayshak definitely fills out the story. You get an up-close view of just how brutal this world can be, and from the beastly men to the women who are either beaten down or ready to blow, the depictions are vivid and not easily forgotten. There’s movement and energy in every panel, even when the characters are standing still. The colors by Jordan Boyd just enhance and give a glow to highlight the brilliant pencils and inks.

Will they get away and find the Re-evolution agent in time, or will Sapiens die out completely. This could go either way, so be sure to get the whole series. 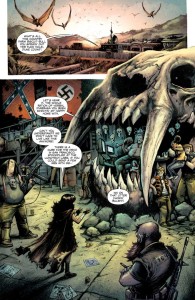 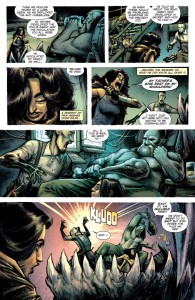 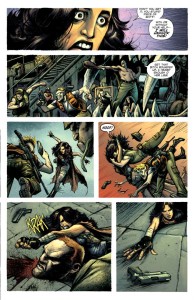 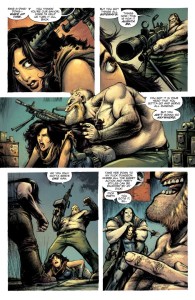