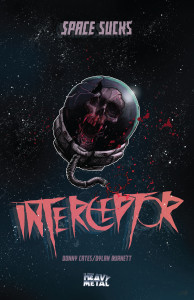 Generations ago, the human race left their homeworld behind, in search of a new one. Finally overcoming petty rivalries based on lines on a map or differing degrees of theological belief, the very best and brightest of us pooled their resources to find a haven. They created the gates that were able to span intergalactic distances, and in their search they found Palus. Safe and secure on this new homeworld, we thought ourselves free to breath freely, to expand our knowledge and advancements, to settle in and get comfortable in our new digs… but truth always finds a way to bite the complacent squarely on the ass.

As it turns out, it wasn’t diminished resources that drove us to looking for another place to hang our collective hat. It was the war against the vampires, the ravenous blood suckers who dug their way out of their holes and back into our lives. It was a war that we were losing, and losing badly. So we gathered our chosen and left the planet Earth in our rearview mirrors… but with one parting shot: from the safety of outer space, we detonated the entirety of our accumulated nuclear arsenal. At the very least, it was a “salted earth” ploy. If we couldn’t live on Earth, we weren’t going to leave it any shape to support anyone else.

Of course it didn’t quite work out that way.

The vampires didn’t just survive the nuclear holocaust. They thrived. They evolved into a society and began their own advancements and technological leaps. When we left them behind with an entire planet over which to spread, we gave them every opportunity to foster a single minded determination to track us down and follow us, wherever we went.

On Palus, things are buzzing… A vampire scouting expedition was intercepted and dealt with, but the implications couldn’t be ignored. They’d found us, and they’d be coming for us. Luckily a plan was already in motion for just such an emergency. A single volunteer, Sgt. Poli Lehan, has been trained in every form of combat known and fitted with the latest cybernetic enhancements. She’s also being given control of a suit of armor, a mobile weapons platform that would make Tony Stark proud. Poli’s mission is to return to Earth and find out just what kind of threat the vampires pose, to transmit everything she can learn back to Palus, and to deal with the vamps in any way she sees fit.

This is where Weeps comes in… Weeps is just a girl making her way through life on Earth. Weeps isn’t a vampire, she’s pure human through and through, descended from the masses not found worthy of the mass exodus generations before and left behind to deal with the mess. Weeps is a member of the resistance, fighting against the oppression of the vampire masters, and she’s on the scene when Poli’s ship crash lands in the middle of a swarm of primitive offshoots of the vampire race, affectionately referred to as “Ticks”.

What follows is a fast paced, break-neck story that follows Poli and Weeps as they try to stay a step ahead of Arden Reeve, the vampire sheriff of the South West Territories, and his forces. We’re introduced to Randolph, Weeps’ father and leader of the resistance, her older sisters Wreak and Woe, and Her Majesty Matilda, ruler of the North and Blood of the King. We’re also given a glimpse at the vampires’ society, with a “blood drunk” Matilda sitting upon her throne and surrounded by a retinue of feeders… humans kept as a food source.

Coming from Heavy Metal Magazine, Interceptor is exactly what you’d expect. It’s outlandish, it’s visually over the top, and it’s as unrepentantly vulgar as you could hope. With the first two issues read, I’ve found myself itching for the third. Weeps as a character is great as the smart mouthed comic relief, and Poli shows promise as the upstanding and heroic soldier on a mission. There are plenty of well-executed comic beats throughout the first two issues, not all of them blatantly thrown out there for all to see. The art is dynamic, with a darker tone that very well fits the environment… it is a post-apocalyptic Earth, after all.

So yes, I’m impressed with this comic. It’s a take on vampires that puts their society at the top of the hierarchy, as well as the food chain, and presents humanity as their food source. The lines are drawn, and the struggling few people who are determined to be more than cattle are a stubborn lot. It’d be a shame if no one read about their fight. 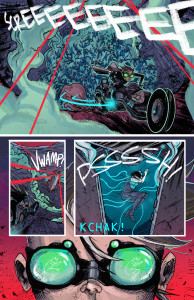 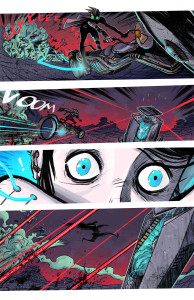 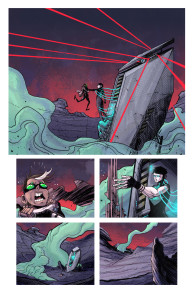