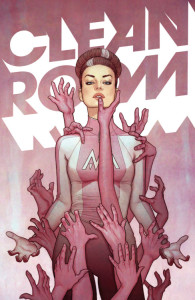 Astrid finds herself in the unique position of interrogating someone…scratch that…someTHING truly unexpected in the Clean Room, and she may not leave there alive. Meanwhile, Chloe storms off to find another way to take down Astrid and her corporation, only to find her life spiraling farther down the drain…not to mention, something from the Clean Room may have slithered out to follow her home.
———-

Chloe Pierce is a reporter on a mission… Her fiancé recently committed suicide in their kitchen, an open copy of a self-help book written by the head of the Honest World Foundation, Astrid Mueller. With a determination that won’t be denied, Chloe sought out, and got, a one on one interview with Mueller, in her very sanctum, the headquarters of the Foundation. In an unprecedented act, Mueller even allowed access to a session in her “Clean Room”. By all appearances the session is some form of mental therapy or hypnosis in which a Foundation member is pulled into their deepest and most secret sins, and has those sins dragged out into the light. What Chloe saw in this session, what she heard, did nothing to sooth her concerns over the death of her fiancé. To the contrary, she comes out of the interview more convinced than ever that Astrid Mueller is leading her growing organization like a cult, and needs to be stopped.

The truth is, as always, a little more complicated than Chloe Pierce realizes. Astrid Mueller has an inner circle. That inner circle is privy to what goes on in the Clean Room, and know what Astrid’s true goals are. In the Clean Room, Astrid communes with a person’s inner demons… the true demons at the heart of everything dark and sinister in the world. More than a metaphor, these demons lurk behind our eyes and whisper in our ears. Sometimes those whispers are pushed into the background, buried in the subconscious. Sometimes they aren’t…

After her failed meeting with Chloe, Astrid finds herself four hours into a Clean Room sessions, confronted with a particularly nasty piece of work. The man she’s trying to excise is so far gone into his demon’s control, he’s gouged out his own eyes and is threatening so much more. He claims to be the same demon responsible for the childhood accident, that put Astrid on her path, and if he’s to be believed his origins could be traced back to the library in Alexandria… if he hadn’t seen to it that the library was burned to the ground.

Meanwhile, Chloe has returned home, the site of her fiancé’s suicide, and only starts to see the truth of the things she learned in the Clean Room.

Clean Room is in no way shape or form the kind of comic you’ll be reading to your kids before the lights go out at night. The themes found in its pages are, to say the least, adult oriented. To be honest, in reading the first four issues, I was reminded very much of Clive Barker’s work. The story is deeply rooted in the abnormal psychology of evil, but roots the origins of that psychology in the supernatural. What’s interesting is how Gail Simone weaves parallels between her work here, and real life “churches” claiming some of the same things. Anyone who’s read into Scientology might recognize similarities between their “audits” and the Clean Room sessions. Read a little deeper, and a person could start seeing where Scientology claims that many of our darker thoughts can be attributed to ancient spirits working their way into our thoughts.

I started reading Clean Room based partially on reviews I’ve seen, but mainly for the draw of Gail Simone’s writing. I wasn’t sure what it was I was getting myself into, but I’ve liked her work on Red Sonja and Swords of Sorrow, so I was interested in what she could do in the horror genre. I can safely say that there isn’t a trace of Sonja’s wry wit, or the swashbuckling pulp adventure of Swords of Sorrow. Clean Room is, to put it bluntly, creepy as all hell, with images both disturbing and fascinating.

If it’s a little light reading you’re looking for, this is NOT it. If you’re looking for something a little more thought provoking, maybe something dark, sharply written and crisply drawn, draw the curtains and turn out the lights… Fans of books like Preacher and Hellblazer, both Vertigo titles, by the way, should be in for a treat.