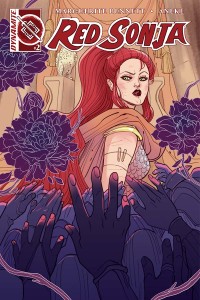 Red Sonja #2
Dynamite
Written by Marguerite Bennett
Illustrated by Aneke
Colors by Jorge Sutil
Based on the characters and world created by Robert E. Howard

Marguerite Sauvage (DC Comics Bombshells) provides this intense cover artwork to the second issue of the redesigned Red Sonja’s adventures, available here as a super-rare “Virgin Art” variant! In this issue, Red Sonja battles to save Hyrkania from its own army, as her people turn warlike and become more vicious than even their enemies. Racing to the throne, with a price on her head, Sonja finds herself entangled in the charms and wiles of a mysterious and beautiful performer… and when the face of the King is revealed at last, Sonja is captured in intrigues more deadly than any she has known!
———-

Red Sonja. She Devil with a Sword. The crimson haired huntress who has fought demons. She’s killed wizards, led armies, brought kingdoms to their knees and raised others up to impressive heights. And now, Hyrkania’s favorite daughter is faced with an enemy even her sword can’t hope to cut down. Public opinion.

Having turned down the Hyrkanian throne, offered to her by the dying king, Sonja chose to remain as she was. She would patrol the land of her birth, fighting the enemies of her people in the only way she knew how. What she couldn’t have predicted was the complete lack of enemies in a land that was suddenly at peace, given everything it needed and/or wanted, and allowed to wallow in growing complacency.

The new king has done a great job since taking his place on the throne. He’s brought education to the four corners of Hyrkania. He’s secured the borders against foreign enemies, signed treaties, opened trade routes, and made friends. His patrols keep the people safe from all internal threats, such as they are. The people are, for all intents and purposes, very well-tended sheep… unless they commit the ultimate treason, and try to leave.

Sonja prevents the slaughter of an innocent family, just a few miles from the Hyrkanian border. It isn’t bandits or foreign assassins committing the act, but the Hyrkanian king’s own Black Talons, the very force tasked with patrolling the land and enforcing the rule of law. The family’s only crime is not wanting to live in a country where their children will be conscripted into service to provide for the “greater good”. Accused and declared guilty of treason by the king’s Black Talons, the impromptu execution is stopped by Sonja.

Now Sonja’s challenge is overcoming the resistance of Hyrkania’s kept populace, content in their secure and comfortable servitude, as she decides to face this new king directly. What she finds at the end of the book isn’t an evil overlord, or a cabal of conniving madmen manipulating a figurehead. Accustomed to facing enemies of a more obviously evil nature, Sonja’s stymied when she finds that there isn’t anyone to swing a sword at.