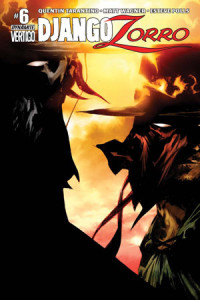 After a tense run-in with the Archduke’s soldiers leaves Diego wounded, Django finds that he must step into the black costume and mask to operate in Zorro’s stead. He soon discovers that what he thought of as a simple bodyguard job has forced him to confront a grim and all-too familiar enemy-the specter of slavery. Meanwhile, the ever-wily Diego lays the seeds of a trap for the greedy Archduke. Quentin Taratino’s first original foray into comics draws closer to its dramatic conclusion, scripted by Eisner Award winner Matt Wagner, artist Esteve Pol and colorist Brennan Wagner. one more issue to go until the grand finale…
——–

Don Diego is an old man, well past the years that found him riding the countryside as the masked Zorro. It’s fortunate, then, that he’s made the acquaintance of Django (the ‘D’ is silent) Freeman, bounty hunter and blacksmith. The old crusader of justice and the young gun slinger for hire might be an odd pair, but the havoc they bring to the old American Southwest plays like a Quentin Tarantino movie.

Did I mention that the book is written by Quentin Tarantino and Matt Wagner? The collaboration between these two great storytellers gives us a new chapter in two very different stories that deserve to be told.

We have the aging Zorro, without whom a certain young orphan might not have found the inspiration to take to the streets of Gotham in his own crusade. As far as fictional characters go, Zorro has seen his share of rebirths, but here we get a look at Diego’s golden years instead of another version of what’s already been told. His methods may have changed as he’s aged, leaning more toward subtle strategy than on swashbuckling and daring do.

And we have the newly unchained Django, a character that took the classic western gunslinger archetype and gave it a controversial twist. I was surprised when I saw that Tarantino was directly involved in this series, as he’s not known for his sequels. More so when I read that he was counting this series as “cannon” for his character, the official next chapter in Django’s story.

Without a doubt, the team up isn’t without its problems. Where Diego is urging a subtle approach, gathering evidence and intel against the evil archduke (you know he’s evil because he calls himself “archduke”), Django favors a more direct approach. This fundamental difference is even more evident when Django comes across the bodies of several workers who had been tortured and hanged. In Django’s own words, “Some sonsabitches just need killin’.”

The story is revving up to its climax, and there can be no doubt that bullets will fly.