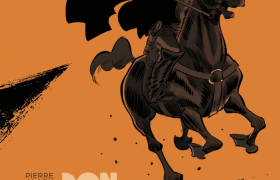 Django/Zorro #6 (Dynamite – / Lee / Tarantino / Wagner / Polls) After a tense run-in with the Archduke’s soldiers leaves Diego wounded, Django finds that he must step into the black costume and mask to operate in Zorro’s stead. He soon discovers that what he thought of as a simple bodyguard job has forced […]

The acclaimed filmmaker Quentin Tarantino comes to Dynamite for the first time with a sequel to his film Django Unchained, as Django meets the legendary Zorro!  Known for his incredible films that are uniquely “Quentin”, such as Pulp Fiction and Kill Bill, Django/Zorro will stand-out from every comic book coming out this year.  Django/Zorro is […]