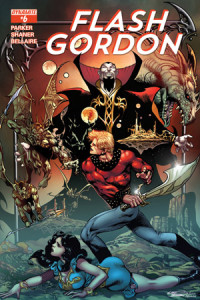 Smile, you’re saving the universe! Flash Gordon and Dale Arden and Professor Zarkov are taking apart Ming The Merciless’ empire piece-by-piece, and having a ball doing it…if only Ming wasn’t thinking 25 steps ahead…

All thoughts that came directly to my mind when I read this issue…  Speaking as a big fan of the 1980 cult classic, which I liked for many of these same reasons, the comic brought it all to the table for a smorgasbord of cheesy throwback goodness.

Dale is being held by the Hawkmen of Mongo, as they think she has the crystal that can open a portal back to earth.  She doesn’t have it, but she knows that without that crystal there really wouldn’t be a need for the two Hawkmen escorting her to hang onto her.  By “escorting”, I mean carrying her, dangling between the two of them, high above the ground.  Showing good sense, Dale figures that the more useful she could keep herself to them, the more likely she’d be able to rescue Flash and Professor Zarkov.  With that in mind, she convinces her captors that to get the crystal, they need to rescue her friends…

Yup, you read that right.  Dale is on a mission to rescue Flash and Professor Zarkov, who have fallen victim to the lure of the Skyren and are being held prisoner on Sky World.  This race of beautiful flying women rely on outside men in or to procreate (the Skyren only give birth to females), and through the hypnotic power of their siren song they’ve lured the boys into their clutches.   The Hawkmen, believing that Flash has the crystal, determine that Dale can infiltrate the Skyren’s home because being a woman makes her immune to their song.  It’s misogyny is reverse.  Misterogyny?

I digress…  The story seems pretty implausible, which is exactly why it works for me.  I watched the old Flash Gordon movie serials, and am still a fan of the aforementioned movie (“Flash….. Ah-aaaahhhhhh!  Savior of the Universe!”), so the silliness works for me.  Also, it doesn’t really seem that our characters are the one dimensional and predictable heroic types, and might actually show some depth.  Between you and me, Flash sorta comes across as a little bit of a jerk here.  The artwork reminded me a little of the old comic strips, maybe a little more polished and in color, with a clear style that keeps the classic character designs firmly intact.

I say, if you have an interest in old-school pulp hero sci-fi action, give this title a go. 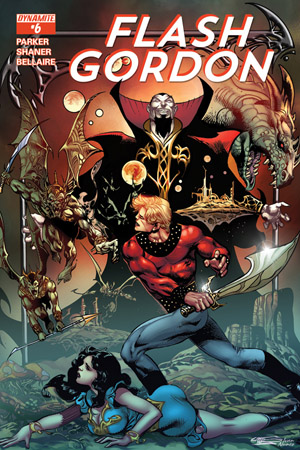 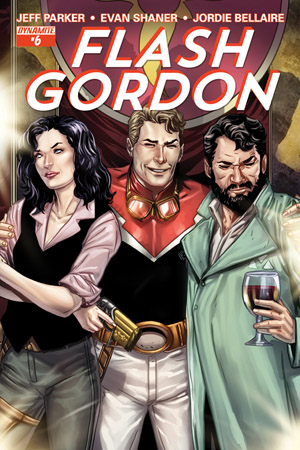 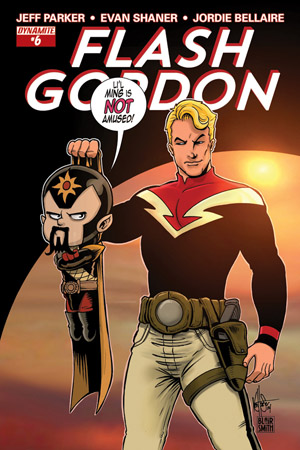