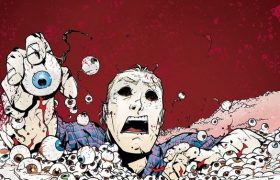 The beloved thriller/horror comic series by Joshua Williamson (The Flash, Birthright) and Mike Henderson (Dead Man Logan, Daredevil) is back this June from Image Comics in the highly anticipated new chapter, Nailbiter: Returns #1. Sixteen of the world’s worst serial killers were all born in the same small town…but Agent Finch and Sheriff Crane solved […]

The legendary late artist Al Williamson’s Star Wars: The Empire Strikes Back stories are collected in the award-winning Artist’s Edition format this April. Included will be the complete adaptation, first published in issues #39 through #44 of the monthly Marvel Star Warscomic. In addition, pages from Star Wars #50, #98 and the Star Wars: Return of […]

The world famous attraction haunts Marvel Comics in 2016! And its residents are just dying to meet you! Today, Marvel Entertainment and Walt Disney Imagineering are proud to announce THE HAUNTED MANSION #1, the newest blockbuster limited series coming in March! Step inside foolish mortals, as rising comic stars Joshua Williamson (Illuminati, Ghosted) and Jorge […]

DOCTOR WHO: THE TWELFTH DOCTOR #10 Writers: Robbie Morrison | Artist: Brian Williamson & Mariano Laclaustra  Colorist: Hi-Fi 32pp | FC | $3.99 Thrillingly explosive action on the ’60s Las Vegas strip as the Doctor and Clara battle the mob AND an alien invasion force! • The Doctor gambles with humanity – with the highest stakes and the longest odds! […]

Hushed whispers cut across Battleworld. One of the most vile villains in history still straws breath. But how can this be? He should be dead! And yet his legend grows even stronger. Today, Marvel is pleased to present your first look at RED SKULL #1 – a brand new Secret Wars limited series from rising […]

The battles in Secret Wars are so big, we had to launch an entirely new title just to contain them! Today, Marvel is pleased to present your new look inside SECRET WARS: BATTLEWORLD #1 – a new 4-issue Secret Wars limited series of wall-to-wall action across the surface of Battleworld!  Bursting with epic action, each […]

DOCTOR WHO: THE TWELFTH DOCTOR #7 Writer: Robbie Morrison | Artist: Brian Williamson | Colorist: Hi-Fi 32pp | FC | $3.99 ‘The Fractures’ Part 2On our Earth, UNIT scientist John Foster was killed in an accident… but in a parallel universe, his wife and daughter were killed, while that world’s John Foster survived. One thought kept that John going through […]

The battles in Secret Wars are so big, we had to launch an entirely new book just to contain them! This May, prepare for the big, bombastic action like you’ve never seen before in SECRET WARS: BATTLEWORLD #1 – a new 4-issue limited series of wall-to-wall action across the surface of Battleworld!  Bursting with epic […]