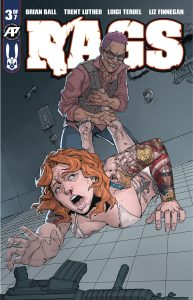 Having escaped the chaos of the Super-Store, Regina finds herself struggling to prevent having a mental breakdown. She finds what she believes to be a second safe space to hunker down, but then encounters a pair of survivors with less-than-good intentions.
———-

Marine veteran Regina “Rags” Ragowski has been having a pretty rough time of it. She’s been drifting since her dishonorable discharge from the Corps, dealing with the lasting effects of PTSD, and most recently she’s had a major falling out with her fiancé. If none of that were bad enough, immediately after her break up- during which she impulsively took off the clothes he’d recently bought her and threw them back at him- Regina found herself surrounded by zombies and wearing nothing but a string bikini (it is Southern California). Since then, she’s been on the run and searching for a safe haven… and a pair of pants.

Rags the comic book has had a pretty rough go of things itself. The product of the imaginations of veterans Brian Ball and Trent Luther (supposedly the result of a late night playing Left for Dead), it’s been fighting off more than its fair share of problems common to all independent titles. On top of the crowd-funding struggles, endless self-promotion through social media, and keeping up with their day jobs, Team Rags has found themselves butting up against modern day pitfalls of internet piracy and the outrage of social justice warriors. To the former all we can say is “pirates suck”, and Team Rags has been pretty vocal about that sentiment themselves. To the latter, specifically the complaints regarding Regina’s lack of clothes and the question often asked: “why is she such a bitch?” I think this third issue supplies some answers.

On the surface, the easy answer to the first complaint is that Regina has been damned unlucky… She’d just had a huge blow up with her fiancé and in an ill-timed fit of temper, she’d thrown her clothes at him (he’d just made some comment about having given her everything, including the clothes on her back). Immediately after her outburst, the couple was swarmed by zombies. Regina managed to get away but not before she saw her fiancé dragged down and killed, and she’s been on the run ever since. In the first two issues, we saw her struggling to find something- anything- to wear as she bounced from one situation to the next. She’s been in multiple fights with both the dead and the living, and it shouldn’t be much of a shock to find that most of the local shops, where one might have found more suitable clothing options, have been pretty well picked over. End result? Rags is still running around in her skivvies, and she’s an emotional wreck relying on training and guts.

The second problem folks have had with Rags (“why is she such a bitch?”) is pretty well addressed in this third issue. It’s a flashback that covers the distance between her initial clash with the zombie menace plaguing Southern California, and her finding some temporary respite with a group of survivors. Without going into detail, but pointing a “states the obvious” finger at the issue’s front cover, this has been a shitty day for Regina all around and would make anyone pretty cranky. There’s also a huge reveal in this issue to the level of grief Regina is dealing with, having suffered through the loss of too many friends and fellow Marines prior to her discharge.

There’s another answer to the complaints I’ve seen leveled at Rags, and it’s one that I thought was pretty friggin brilliant. Rags isn’t just meant to be a literal zombie story, but also as an ongoing metaphor illustrating the problems veterans continue to have with Post Traumatic Stress Disorder. Her lack of clothing shows how ill-equipped she is to deal with her situation on her own, while her tendency to lash out at anyone around her is the all-too-common knee jerk response experienced by those unaware of and unfamiliar with the issues specific to combat related PTSD.

While all of this illustrates (cue Segway) the imagination and determination of Brian Ball and Trent Luther to bring their idea to life, we have to pay respects to the artistic team behind the visual appeal of Rags. I don’t know that I can say it enough, but Luigi Teruel is putting out some of the best art that can be found in comicbooks today. Teruel’s work is outstanding, from his obvious grasp of anatomy, to his dynamic action scenes, and finally to the emotion he’s able to put into facial expressions. On that last, I’ll just refer readers to a certain panel sequence in this issue where Regina goes from fear, to disgust, to outright rage. Even if there were no dialogue at all in this issue, I think the story would still be told- and told well- based on the detail Teruel is able to convey. The final artistic layer is put in place, compliments of colorist Capucine Drapala. The use of colors in Rags has been pretty pointed, being used to highlight certain elements and leaving much of the book to shades of gray. Most noteworthy, of course, is Regina’s status as a badass ginger, complete with a generous helping of freckles. A close second is the attention to detail paid by Teruel and Drapala to Regina’s very impressive ink. Between the full sleeve on one arm, and a half sleeve on the other, every panel that she’s featured in represents a labor of love from both artists.

The issues may be spread out more than some readers would like, but each release reveals more depth to the story at every level. On the surface, Rags is just a damn fine action series. Dig a little deeper, and there’s a pretty significant investment in emotional content on the part of the creative team. No matter how you want to read it, spin and interpret it, Rags is an impressive labor of love that deserves all the attention it can get.