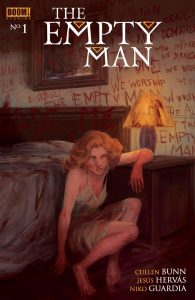 The nation is in the grip of a terrible pandemic. The so-called Empty Man disease causes insanity and violence. Government quarantines are mandatory.

One of the afflicted is Melissa Kerry, and the next step should be to quarantine her—but those who enter quarantine are never seen again. Melissa’s family won’t let that happen. All they have to do is care for her, keep her worsening condition a secret—and they’ll do anything, trust anyone, to keep her safe.
———-

An epidemic is burning its way through the populace. Beginning with hallucinations that grow progressively worse and culminating in horrific acts of violence, the unpredictable disease is like nothing anyone has ever seen or prepared for. The victims share one common symptom… the Empty Man for which the disease (and this book) has been named. The nature of this figure, seen by all and worshipped by some, is as big a mystery as the cause of the sickness itself. Is it a collective hallucination created as the disease affects specific parts of the brain? More disturbing than that very logical theory is the belief that the Empty Man is more than a mere symptom and that the disease itself is just a means to an end.

Whenever a previously unknown illness starts making the rounds, paranoia battles with reason and concepts of treatment versus control are argued. Very smart people start to proclaim that they have all the answers while the opposition declares every word poppycock and chicanery. Lines are blurred as sickness draws victims from all demographics, and fingers are pointed as the mob mindlessly seeks out someone to blame for their misery. It’s an old story, and if handled right it just so happens to make for a great tale of creeping horror.

Cullen Bunn knows horror. More importantly, he knows how to present the mounting affects humanity’s inherent fear of the unknown brings out. Like a disease Bunn’s story starts small, in the voice of an individual. The voice is faceless at first, but we’re eventually introduced to Melissa. She knows something’s wrong with her and admits that the knowledge is useless in the face of her eroding sanity. Andrew and Vicky- Mel’s husband and daughter- are also aware that things aren’t looking good, and are just as helpless to do anything about it. Having put a face to the disease, Bunn then sets about posing questions to his audience. Is the Empty Man a who, or a what? Do the sick know something, have they glimpsed something that remains a mystery to the rest of us? If it wasn’t hers, exactly whose blood was it that Melissa was using to write on the walls in her room?

Backing up the mental imagery established by Bunn’s narrative, Jesùs Hervás & Niko Guardia have set about creating visuals to match. Hervás starts us out with some pretty straight forward illustrations in a relatively realistic style. No outlandish, muscular figures striking dynamic poses, just people doing things that people do… watch the news, sit around the dinner table, riot in the streets, and hang themselves en masse from bridges. It isn’t so much about the panels showing the bloody results of the Empty Man’s influence as it is the creeping moments in between. Hervás’s handle on that more subtle brand of psychological horror- the sudden flashes of terror in between the quiet moments, and then back again- is as solid as can be found in the comicbook medium. Building on that illustrated foundation, Guardia uses colors to accentuate the pencils & inks. His palette makes use of mostly muted tones with heavy shadows for contrast… and then things get bloody. Like abattoir after a long day of butchery bloody, and there’s no doubt that bright arterial RED is the last thing the Empty Man’s victims see.

As in all comicbooks- the ones that don’t come with an audio track- it’s left to the letterer to convey what the writers have created, and Ed Dukeshire performs minor miracles here. The majority of his work is understated, almost as muted as the aforementioned colors. The movie that played out in my head while reading was all about muffled conversations, the quiet shuffling of feet as the characters did their level best to go unnoticed. There was no musical score to interrupt the silence, which made the sudden bloodcurdling screams that much more intense as they ripped across the page with no regard for panel borders.

Personally, I think that horror has got to be one of the more challenging genres to attempt in a comicbook. The creator doesn’t have the hundreds on hundreds of pages to establish the story that an author would have in a full novel (looking at you, Stephen King…). And unlike a movie, a comic doesn’t have the benefit of a creaky floorboard or tense musical score to tell an audience what they should be feeling at a given time. This creative team has used all of those drawbacks and turned them into assets, proving that every problem is just an opportunity.

If you want shock and awe, The Empty Man might not be the title for you. If you want an example of creeping unease that slowly burrows into your skull and has you turning the page back to be sure that you saw what you think you saw (or maybe to reassure yourself that you didn’t), pick up this book. And if you think you see something… someone… lurking out of the corner of you eye, resist the urge to turn and look. Once you know, real or imagined, you can’t un-know… and when you see him, he sees you. 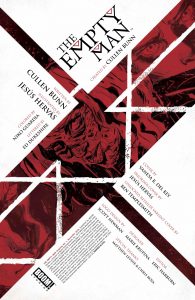 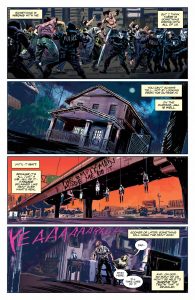 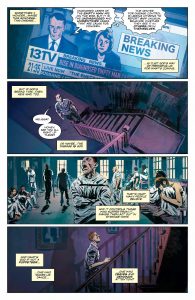 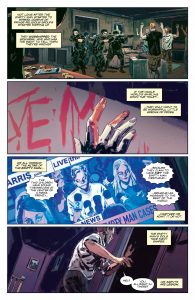 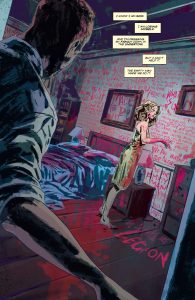 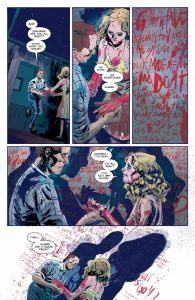