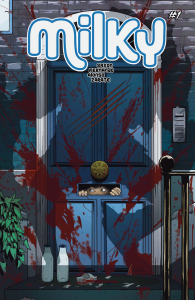 Vikinder Singh, “Milky” to the residents of Crafton Hill, wants very little out of life. He’s not out for fame or fortune… that just sounds exhausting. He isn’t looking for the adulation of his neighbors and peers- although he’d settle for some degree of respect. Milky delivers, in an ironic twist, milk in his sleepy little village, and it’s a job he needs in order to support an expensive cough syrup habit. The cough medicine isn’t about an actual cough, and he’s not using it to cook meth… No, it’s just an excuse to stop in on a semi-regular basis to see Lucy, the town’s pretty pharmacist. Of course, as he’s trying to work up the never to talk to Lucy, without the pretense of a chronic ailment, the invasion begins!

Created and written by Joshua Saxon, Milky is a sharp, well-paced story that uses a few tropes of the science fiction genre to great effect. Saxon starts his readers off in the middle of his action as the not-quite-heroic Vikinder speeds headlong into danger to save the girl. And maybe a cat. Once it’s established that we’re heading into an End of Days kind of scenario, Saxon turns the clock back a bit to introduce us to his cast of characters. In the process, he demonstrates a knack for dialogue and banter- maybe laying it on a little thick at times, but always managing to keep the narrative on track and moving forward.

Most impressive, I think, is Saxon’s handle on his main character. Vikinder “Milky” Singh is the quintessential Everyman, not the strapping hero who might be played by the likes of Mark Wahlberg in a movie adaptation… more of “Sean of the Dead” kind of fella played by Kunal Nayyar (Raj from Big Bang Theory). The Everyman is a great archetype, particularly in science fiction because it lets the reader jump right into a fantastically outlandish situation, resting comfortably in the point of a view of a relatable character. The first time I saw The Last Starfighter as a kid, one of the things that pulled me into the story was that Alex Rogan could have been anyone… just a kid from the trailer park, called upon to “defend the Frontier against Zur and the Ko-Dan Armada”! It’s an instant connection, tying reader to story, and Joshua Saxon does a great job with it in the form of Vikinder Singh.

Likewise, Gian Fernando’s artwork handles the job of bringing normal, everyday people to the page. In a medium filled to the brim (coffee metaphor… might need another cup) with larger than life figures, Fernando’s work is relatively understated. There are no supermodels, no Masters of the Universe strutting around in tights or crop tops, just normal folk walking around doing normal stuff. In fact one of the perks to Milky’s successful Kickstarter campaign (three days left, as of the posting of this review) was the inclusion of backers as background characters in the title’s second issue, coming soon. Not to say that Gian Fernando can’t go Big, because when the action starts rolling, his layouts have a dynamic feel to them… and his aliens. Damn, these aren’t cute little ET’s with glowing fingers, but imposing armored figures that look like those whacky scientists from Jurassic World may have gotten a little carried away. Somebody call that Pratt guy…

The final key ingredient, serving to round out Fernando’s artwork, comes from DC Alonso. He sticks the landing with his work on the colors, giving the world a sense of weight and depth that’s lacking in some larger comic titles. The backgrounds in particular are a great showcase for Alonso’s work, especially in respect to his use of lighting effects. From the lightning storm in full swing at the beginning of the book, to the fires that plague Crafton Hill as the invasion begins, it all serves to show a sense of a world in motion. The foreground is great, all the characters running around and doing their thing, but with everything going on in the background- burning, sizzling, sparking- Milky’s world takes on a life independent of its unassuming heroes and larger-than-life villains.

With its first issue in the can, Milky’s creative team are moving forward with the second, coming soon to Kickstarter. Where will you be when the Milkman saves the day? 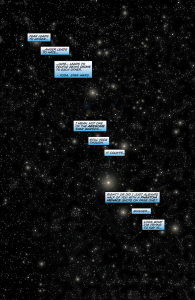 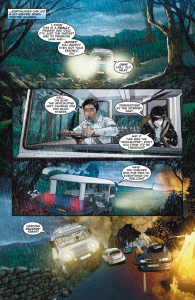 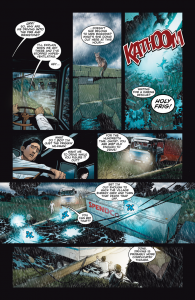 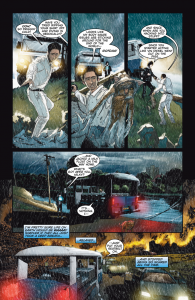 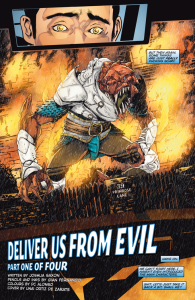