As Bond undergoes a post-mission medical examination, he relays the story of his previous mission to the examiner. Each cut, bruise, and broken bone connected to a specific event of the mission. A connection is made between two people with different purposes: one to save lives, the other to take them.
PART TWO – THE BRAIN
James Bond leads the interrogation of a scientist who allowed a lethal virus to be stolen. But when the investigation takes a surprising turn, Bond begins to question whether he is enough.
PART THREE – THE GUT
One sauna. Twenty Neo-Nazis. One Bond. James Bond.
This weapons deal won’t go according to plan.
PART FOUR – THE HEART
On the run from a lethal antagonist, weaponless and wounded deep in the Highlands, Bond finds solace with a woman who exchanged her job as a doctor and a life in the city for a cottage and solitary life of a writer. Can Bond find a quiet peace unlike he has known before or will his life choices catch up with him?
AND MORE…
ISBN-13: 978-1-5241-0756-7
———-

An assassination plot. The interrogation of a gifted biological weapons engineer. A group of neo-Nazi arms dealers. Disparate sub-plots all circling each other with no obvious connection, but when it’s done readers will have gotten to look just a little bit deeper into the character of Bond. They will have seen through the lethal facade of charm and wit to glimpse a damaged man, dedicated to an ideal but plagued by self-doubt.

Without question, Dynamite has been killing it with their run of 007 titles. They’ve taken out all of the camp, all of the- okay, most of the gadgets- and distilled Bond down to his most basic components. When all is said and done, James Bond is a killer. An assassin for crown and country, to be sure, but a life-taker nonetheless. He’s a man who is given an assignment, and will see that job done no matter the cost. What’s been left out until now is a closer look at what that kind of life has cost him, personally.

Aleš Kot has done a great job of treating James Bond like the completely, tragically, psychologically broken human being that we all know he would be, given his lifestyle and profession. The beauty of Kot’s story is that while some of the cracks do show through, they don’t in any way slow Bond down. He’s treated it much like Post Traumatic Stress Disorder in a combat veteran… Military personnel are trained to focus on the mission first, with all other concerns shuffled to the rear. So long as there’s a mission or goal to be accomplished, the horrors that have been locked away at the back of a soldier’s mind stay secured in that cramped little closet. In The Body, it’s the quiet moments in between life or death struggles that truly haunt Bond and show us the momentary breaks in his resolve. As the series of individual stories unfold, they bring the larger theme together into what turns out to be a pretty tightly wound narrative.

The team of talented artists, each taking on one of the issues in the series, have established their own personal style and delivered a unique look for each chapter. The one thing that they all do have in common is in the way they’ve presented Bond as a dynamic force of violence kept tightly in check. Even in the chapters where he’s playing the part of the calm, cool, and collected charmer, we see the cold calculation beneath… The only real exception to that being “The Heart” by Eoin Marron, where James finds himself wounded and in the care of a truly innocent bystander, while being hunted by an enemy operative- a lynchpin in the overall story that serves as a great contrast to the other chapters.

The visual appeal of The Body is fleshed out by the work of Valentina Pinto on colors. Pinto uses sharp contrasts and shadows to delineate foreground and background, and to accentuate characters. One of the cooler effects is where Bond is shown in a more menacing light, face heavily obscured by shadow to give him the look of that person you wouldn’t want to meet in a dark alley. Another great tactic in colors is where Bond is shown in a crowd of average everyday people… While Bond is shown in his typical dark suit and all business aspect, the normal folk around him are treated to a much lighter, more colorful palette. The scene reminded me of a shark swimming through an oblivious school of tropical fish.

Lettering The Body, Thomas Napolitano has turned in some of the most suitably understated work I’ve ever seen. In general a letterer has to walk a fine line between portraying their art and overplaying it. What Napolitano has done, whether by design or happenstance, is match his work to Bond. In the same way that Bond is always controlled, his devil-may-care character masking the violence just below the surface, his inner monologue is lettered to reflect that same sense.

Having missed out on The Body in its original run of individual issues, I gotta say that I’m pretty happy with the way it reads through in a collected edition. That said, I will say that it might have been interesting to take in single doses, as each chapter can be read as a standalone story. In tying them together, however, the trade edition keeps each entry fresh in mind as it moves along.

Fans of James Bond, particularly those who’ve been following Dynamite’s work in adding to the 007 mythos, shouldn’t take much convincing on this one. The Body may be a different spin on how we’ve seen the character in the past, but it’s an outstanding look beneath a cracked veneer of civility and charisma that has defined Bond for decades. 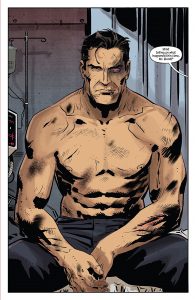 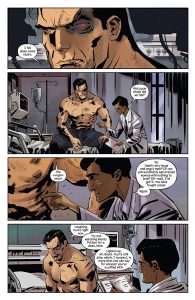 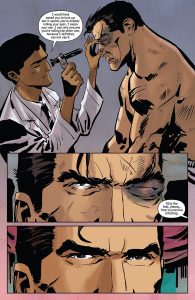