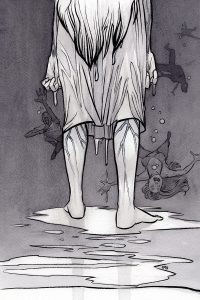 (Hey, there’s a review for issue 2 right here… in case you missed it)

The spirit of Abby May has finally found her parents, and prepares to unleash a storm of retribution. However, when she discovers the truth behind her death, her spree of revenge grinds to a halt. In the penultimate issue of this heart-stopping horror story, this vengeful spirit discovers her true killer.
———-

Little Abby May proves that small packages can hold some big things if they’re pissed off enough. And Abby is pissed. Raised by parents who held some pretty extreme religious beliefs, mostly involving the concept of water-boarding the sin out of their daughter, her vengeful spirit has been on a bit of a rampage. Following her old toy penguin as its changed hands, Abby May has been leaving a trail of soggy corpses in her wake, and in this issue that trail leads her back home…

Horror in comics can’t be an easy thing to pull off. Sure, you can go for “easy n’ sleazy”, resorting to shock and awe gorefests, but I don’t really consider that kind of thing “horror”. To me, horror relies on a slow buildup of tension, watching a story unfold until you’re left twitching at random noises coming from the basement & questioning your life choices as you check under the bed. When everything’s quiet, the sudden shriek or crash isn’t nearly as effective as more subtle creaks or groans. Where one allows for the release of tension in a sudden jump, the other forces you to hold onto that tension, letting it build with every revelation. Each little moment adds to the overall feeling of unease and in the movies have the benefit of mood inducing musical scores and sound effects. Co-creators Pat Shand and Olivia Pelaez have come with something truly creepy, without the benefit of movie magic. Also, their story isn’t about little Abby’s victims, as is usually the case in the movies. Little Girl is actually the story of Abby May and the tragedy that was her short life, and her hunger for violent reprisal against anyone who falls within her reach.

Shand’s scripts bring the focus onto Abby, her victims mere stepping stones as the adorable yet ominous stuffed penguin carries her along to a final destination yet to be revealed. Last issue we were subjected to her history, suffering the abuses of a father believing himself to be a prophet whose god called for the repeated near-drowning of his daughter as payment for her imagined sins. This issue, we’re given a little more insight into how deep the religious delusions of the good reverend go, and Abby’s parents are treated to a visit from their long lost little girl. Shand does a great job of populating his story with characters who come across as fully realized people, fleshed out with idiosyncrasies both likeable and not, despite their status as minor or secondary.

The artistic team consisting of co-creator/illustrator Olivia Pelaez, colorist Fran Gamboa (with J.C. Ruiz), and letterer Jim Campbell has done their part, contributing to Abby May’s haunting (bad pun) adventures. First and foremost, I have to give a respectful tip of the proverbial hat to Olivia Pelaez, most particularly in regard to her character design for Abby. She’s all gaunt and angular features, with odd postures that are subtly unsettling all by themselves. Colored by Gamboa & Ruiz, Abby further has an ethereal quality that works out very well with the rest of the comic’s look. While each scene has its own color palette, working well to pinpoint a certain mood or “feel” for the setting, the colors are fairly crisp and clear, where Abby herself has a uniquely faded and washed out look. Finally, Campbell’s lettering comes in most effectively in Abby’s sparse dialogue… when she speaks, it’s easy to imagine her voice as this raspy, waterlogged croak.

Another feature in this title that I’ve really liked has been the running series of interviews at the end of each issue, as writer Pat Shand talks to fellow comic writers and artists about their own haunting experiences. It all points to Shand’s determination to pour as much real world horror into Little Girl, elevating it to something that any fan of the genre can dig into and appreciate.

There’s something inherently creepy and morbid anytime a ghost story uses a child as its primary subject. Personally, I think we’re wired so that the mere idea of a child’s death bothers us, and when you add to that the concept of an abused child’s restless spirit coming back to seek revenge against the living, the ante is most definitely upped. Little Girl has one more issue to go, and I for one am looking forward to seeing where Abby May’s story ends. I hope it’s peaceful, with a good sense of closure as Abby is finally able to move on to her final rest.

It’s a horror story, though, so I’m pretty sure that’s not gonna happen…