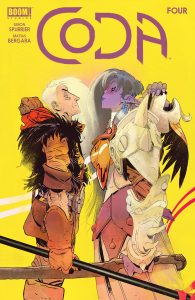 Having successfully warded off Thundergog from its assault on Ridgetown for at least one more day, Hum turns his attention to the Urken soldier who turned the tides of the battle…
———-

Review for Issue #1 can be found here…

Listen well, oh stalwart reader, as a tale is spun to pull at the strings attached to yon heart. A quest has been fulfilled, yet Evil (pronounced Eee-vyl) still exists to be vanquished. Though our… uh, ‘hero’, kinda… has been reunited with his lady most fair, events continue to unfurl before the winds of fickle fate and the enemies of right in the world have arses in need of a good kicking. If only it were always easy to tell the difference between friend and foe.

In Coda’s previous issues, we’d been following the title’s aptly named “Sir Hum” as he sought out a means by which he could rescue his beloved Serka. What we discovered in the last issue was that Serka’s captivity was more metaphorical than literal. Now that they’ve been reunited, the truth revealed is that rather than held captive by evil Urken, Serka is in fact Urken herself. Much more than that, she’s dedicated her life to atoning for the past sins of her people, all while burdened with the berserker rage that made them so feared.

If only her husband could talk her out of it…

Co-created by writer Simon Spurrier and artist Matias Bergara, Coda’s a story that you can really settle in and chew on- meat, gristle, and all. First and foremost people love a roguish anti-hero, and in the person of “Sir Hum” we’ve got as much “anti” as we should be able to handle. His motives are noble, for the most part, however his methods are often questionable and occasionally cringe-worthy. The world he inhabits lends itself extremely well to this gray ideology, as everyone in it- with the exception of the all too noble Serka herself- is working the angles to benefit themselves. It’s a world living on the scraps of the old, squeezing the few remaining sources of the magical essence known as akker for all they’re worth and living on the dream that someday things could get better. All in all, not a fertile breeding ground for selflessness.

Simon Spurrier has become one of those writers in comics whose work I’ll pick up on sight, just based on his name and the quality of writing that always seems to go with it. His characters avoid philosophical absolutes in all of their shapes and sizes, favoring much more interesting and flexible moral codes. More importantly, at least to me, Spurrier’s dialogue beautifully skirts the dangerous line between the wry and the ridiculous. Frankly, if nothing else were going on in Coda, I’d want to read it just for the running series of rants his main character indulges in, and the responses he gets when other characters see fit to call “bullshit”.

But don’t worry, there’s much more to Coda than wit and wisdom… It’s got action to spare, and in the third issue we were treated to some pretty epic shots as an all-out attack on the walled city of Ridgetown brought us giants, explosions, and an enraged stabby-horse (hm… pentacorn) high on magical essence. Now in issue 4, Matias Bergara takes it back down a notch so we can catch our breath. It’s all character building set against the backdrops of cityscapes and sweeping vistas as Serka and Hum set off on the next leg of their adventure. His work here is more stylized than some artists working in comics, but not to the point that readers will miss out on the subtleties of facial expressions in the quieter moments.

Rounding out the visual aspect of the title, Coda benefits from the work of letterer Jim Campbell. Much more than just setting type, Campbell’s efforts give the printed word cadence and rhythm. Rarely are any of the characters in Coda just “talking”… there’s a lot of subtext going on, and Campbell catches it all and makes it easy to distinguish between shouts and whispers. The miracle is that he does it all and still makes it readable- there’s nothing worse than trying to read a comic where the lettering is so heavily stylized that you have to pull out the magnifying glass in order to decipher it. I’ve already got bifocals, and they give me enough challenges, thank you very much.

I can’t say it any other way. Coda is an outstanding fantasy series from the creative minds of Boom! Studios, Simon Spurrier, and Matias Bergara. It’s original in just about every way as it follows the classic “hero’s journey”. Even the tropes found within these pages are put to use in ways that make them way less tropey. Check it out and if you think I’m wrong, I challenge you to convince me. 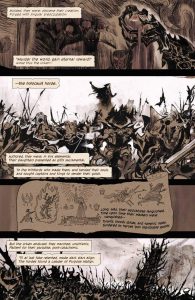 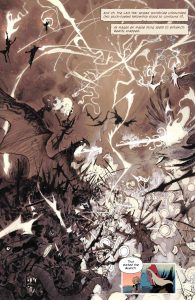 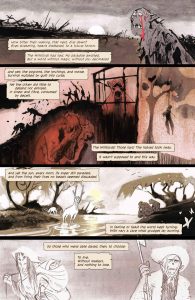 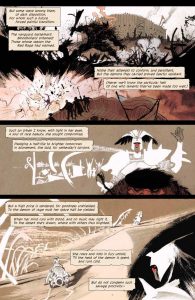 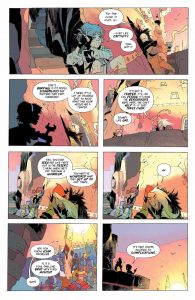