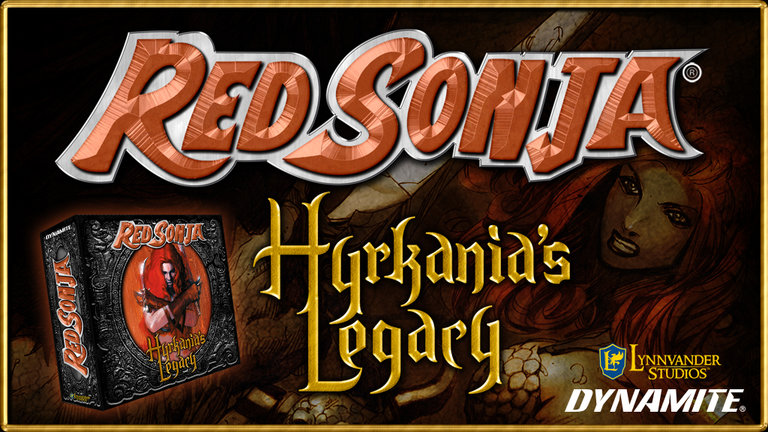 Dynamite Entertainment is pleased to announce it has once again partnered with Lynnvander Studios to further continue their expansion into the collectible game space with the new Red Sonja: Hyrkania’s Legacy! The new co-operative game is expected to retail for $40, and is based on one of Dynamite’s most iconic characters. Featuring the stunning artwork from Dynamite’s series including, but not limited to, series written by industry icons Gail Simone and Marguerite Bennett, and many more great writers and artists, the game will transport players inside the world of Red Sonja where they will join quests, and battle the same foes the “She-Devil with a Sword” has faced! The Dynamite Red Sonja: Hyrkania’s Legacy Kickstarter campaign is live now, and can be found by visiting:

Red Sonja: Hyrkania’s Legacy is a cooperative adventure game for up to 4 players. You and your allies will choose from many quests before travelling through the realms in search of artifacts, treasures, monsters and adventure! These are the days of high adventure!

The Red Sonja: Hyrkania’s Legacy board game comes with:

“The team at Lynnvander Studios was such a pleasure to work with during our ReAnimator Board Game Kickstarter, and did an incredible job putting together the final product for the fans, and we can’t wait for the fans to see and play the game,” says Nick Barrucci, CEO and Publisher of Dynamite Entertainment. “We are excited to work with them again, and began development on our next exciting board game offering with them almost immediately. Red Sonja: Hyrkania’s Legacy will provide both Red Sonja and board game fans alike with a lively gameplay experience they’re want to play again and again!”

Production on these new offerings are currently under development, with an expected shipping date of May 2018. Backers who support the Dynamite Red Sonja: Hyrkania’s Legacy Kickstarter will have the opportunity to receive additional rewards, including digital graphic novels and beautiful Red Sonja busts based on the work of Art Adams!

The Dynamite Red Sonja: Hyrkania’s Legacy Kickstarter is available for a limited-time only at the special Kickstarter price. Backers can get on board and gain access to all these amazing rewards by visiting https://www.kickstarter.com/projects/dynamiteent/red-sonja-hyrkanias-legacy today!

Dynamite was founded in 2004 and is home to several best-selling comic book titles and properties, including The Boys, The Shadow, Red Sonja, Warlord of Mars, Bionic Man, A Game of Thrones, and more.  Dynamite owns and controls an extensive library with over 3,000 characters (which includes the Harris Comics and Chaos Comics properties), such as Vampirella, Pantha, Evil Ernie, Smiley the Psychotic Button, Chastity, and Peter Cannon: Thunderbolt.  In addition to their critically-acclaimed titles and bestselling comics, Dynamite works with some of the most high-profile creators in comics and entertainment, including Kevin Smith, Alex Ross, Neil Gaiman, Andy Diggle, John Cassaday, Garth Ennis, Jae Lee, Marc Guggenheim, Mike Carey, Jim Krueger, Greg Pak, Brett Matthews, Matt Wagner, Gail Simone, Steve Niles, James Robinson, and a host of up-and-coming new talent.  Dynamite is consistently ranked in the upper tiers of comic book publishers and several of their titles – including Alex Ross and Jim Krueger’s Project Superpowers – have debuted in the Top Ten lists produced by Diamond Comics Distributors.  In 2005, Diamond awarded the company a GEM award for Best New Publisher and another GEM in 2006 for Comics Publisher of the Year (under 5%) and again in 2011.  The company has also been nominated for and won several industry awards, including the prestigious Harvey and Eisner Awards. 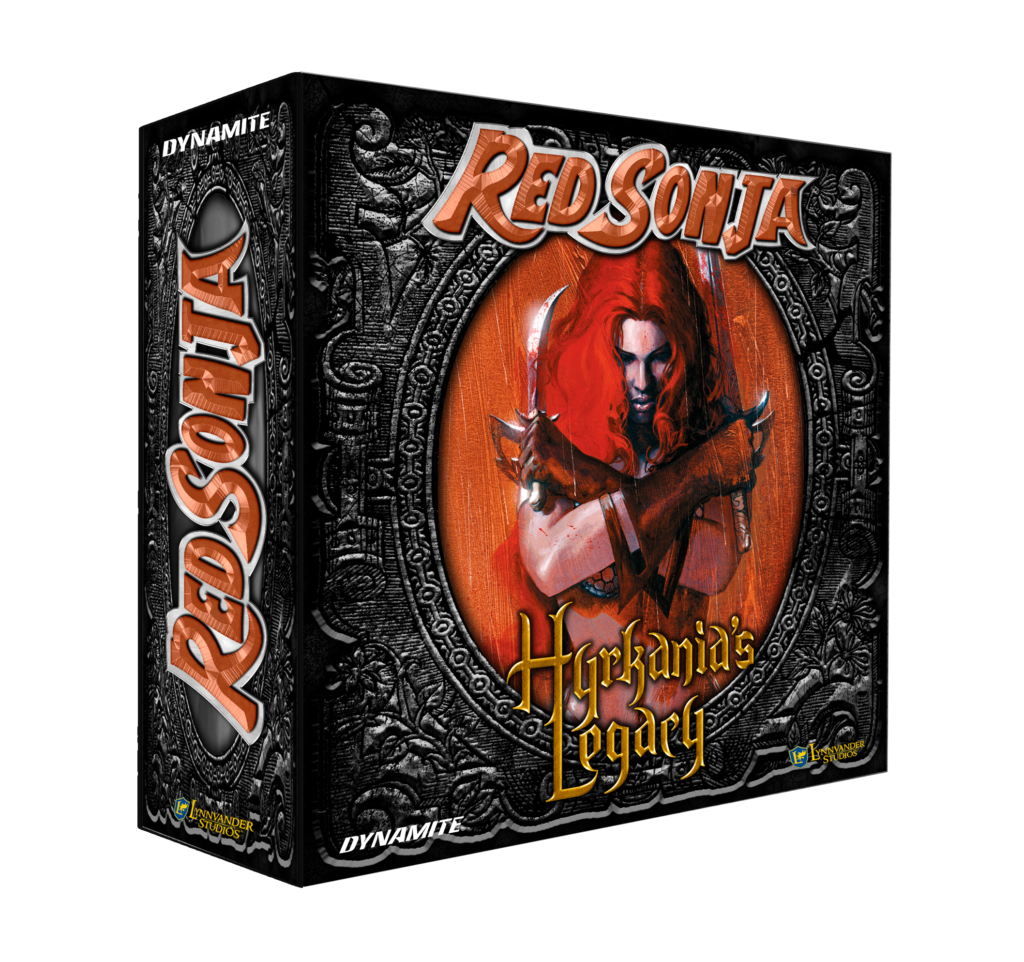 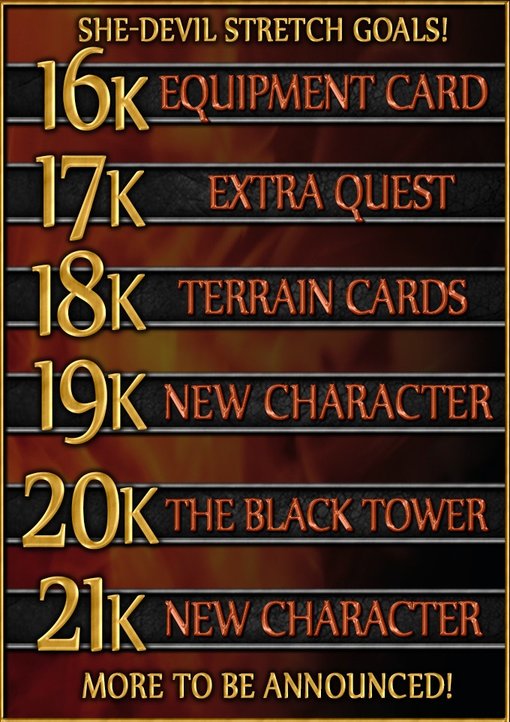 Lynnvander Studios Inc. is a Canadian based company enhancing existing and developing entirely new creative properties. Founded in July, 2005 by Thomas M. Gofton, Lynnvander is responsible for the inception of several media initiatives including projects of film such as the award-winning fantasy series “Mind’s Eye” as well as the acclaimed Shadowrun parody film “The Gamers: Natural One” and the epic sequel to The Gamers: Dorkness Rising “The Gamers: Hands of Fate”.

Since their inception, Lynnvander has gone on to create some of the best board games available today, including Buffy the Vampire Slayer, Galaxy Quest, Albion’s Legacy, Sherwood’s Legacy, Neverland’s Legacy and more. They are currently handling adapting some of the most famous IPs in the world into board games, including Dragon Ball Z, Cowboy Bebop, Terminator, and the Three Musketeers. They work with countless publishers around the world including Ninja Division, Shinobi 7, River Horse Entertainment, Jasco Games, Catalyst Game Labs, Norse Foundry Publishing and Dynamite Publishing.

Beyond their board game successes, they have also developed role playing games including their own Legacy of Mana, a world all magic must fear. Also in this world is the fantasy novel Hope’s Ordeal, and it serves as the role-playing setting for both Pathfinder and Dungeons and Dragons. Lynnvander Studios works in the new world of transitional media to ensure that the properties they work with are treated with the utmost respect for both their owners and their fans.