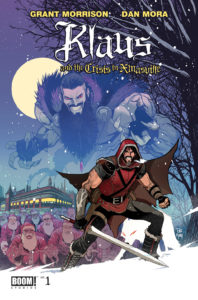 Eisner Award-winning creator Grant Morrison (All-Star Superman) and Russ Manning Award winner Dan Mora (Saban’s Go Go Power Rangers) reunite for a brand-new Klaus Special!
An evil Santa from an alternate dimension has founded an evil soda corporation that uses Christmas and Santa as a marketing tactic to build their fortunes.
Only Klaus can defeat the Pola Cola Corp and the zombie-like Santas that are in the evil Santa’s thrall.
———-

It’s 1985 and Kate is expecting her family to arrive for her birthday dinner. After a disturbing message from her son is left on her answering machine, she pulls out a memento from her youth- a flare gun that would call upon the aid of Klaus if she ever needed his help. A promise being what it is to one of Klaus’s nature, he takes up Kate’s cause and investigates her family’s disappearance. The message on Kate’s machine mentioned a town called “Xmasville”, where the holidays are celebrated year-round, but when Klaus arrives he finds anything but a festive atmosphere. Children are being captured and harnessed for the power of their imagination, an energy that’s being syphoned off to the last drop for dark (of course) and sinister (duh) purpose.

Not gonna lie, kids, I’ve come to look forward to these one-shots from Grant Morrison, Dan Mora, and the folks at Boom! every year. From their “Santa: Year One” mini-series that started it all back in 2015, where Santa’s Nordic origins were revealed, to last year’s run in with the Witch of Winter, I’ve been a fan of this iteration of jolly old Nick. First of all, he’s not what you’d expect… unless you’ve paid attention to some of the old Germanic myths, linking Santa to the leader of the Wild Hunt, Wodan (aka: Jólnir, meaning “Yule figure”, and Langbarðr, meaning “long-beard”, and even Odin in Old Norse folk tales). This Santa’s got a broadsword and the thews to swing it!

There isn’t a whole lot that can be said about Grant Morrison that hasn’t been said many times and by more relevant writers than myself. I’m pretty much just a fanboy who lucked into a gig that pays out in free preview comics to read, and gets to talk about the ones I like. But I will say that Morrison seems to really attack his forays into the world of Klaus with gusto and enthusiasm. He packs hundreds of years of myth into these relatively short comicbook entries, and I can only hope that eventually he’ll fill out some of the backstories that have been mentioned. I know that if he doesn’t, there isn’t likely to be anyone else ready to tell us tales of Klaus, Grandfather Frost (Ded Moroz from Russian folklore), and an ongoing civil war being waged on the surface of the Moon. For now, though, we should just be happy with what we’ve got, because what we’ve got is an action-packed battle between good and evil, pitting the mighty Klaus against an evil version of himself from an alternate dimension. For a guy who takes part of his power from the belief of others, living in the more cynical corporate world of the mid 1980’s, it’s the kind of fight that doesn’t have a guaranteed outcome.

As always, the art by Dan Mora is outstanding and dynamic. We can absolutely believe that Santa’s out there to take it to those who would victimize and oppress the innocents of the world, with a two-handed sword strapped across his back and wolf companion Lilli by his side. Mora gives the world he’s helped Morrison to create hard edges and creepy shadows fitting for the likes of a sinister Santa who would prey on children. The action scenes have a great sense of flow about them, each hit carrying impact and weight behind it. I don’t know art, but I know what I like, and it’s art like this that could prompt me to check out Mora’s other work- Go Go Power Rangers, Planet of the Apes/Green Lantern, and WWE… Okay, the Apes/Lantern crossover was kind of a gimme- but the other two might take a bit more to get my attention on their own. Mora’s style can take a subject that might otherwise get passed over, and makes it jump out.

The work of Ed Dukeshire comes into play, and keeps the more alien aspect of Evil Santa firmly in focus as he indulges in his villainous rants. It isn’t always the case, where a letterer’s work comes into play to this degree, but that’s the pitfall of the job. If your work is too noticeable, it can take a reader out of the story… and consequently you go down as the unsung hero of the comicbook medium. Here, though, Dukeshire gets to play a bit more, giving the anti-Klaus an otherworldly voice. It’s a balancing act that’s played out very well.

Klaus’s world is a harder one than might make it suitable reading for younger audiences, but that’s kinda the point. The young have plenty of reading if they want to check up on the jolly old elf. It’s those of us who might be looking for something a little more mature and action oriented that lack the reading material this time of year. If you find yourself in that latter category, grab a copy of Klaus (pick one, they’re all great reads), put this year’s viewing of Die Hard on standby, and take a look at a holiday title with an edge to it. 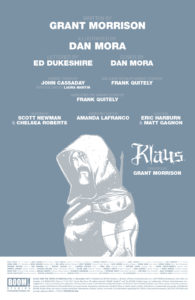 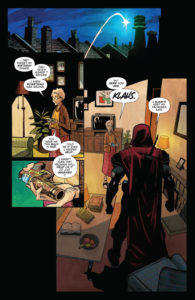 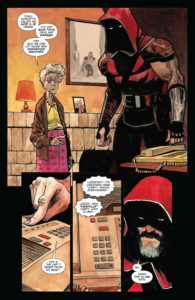 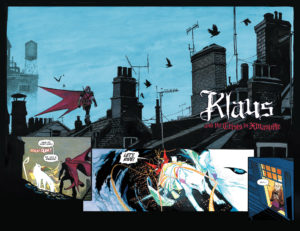 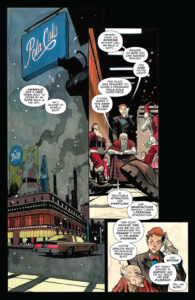 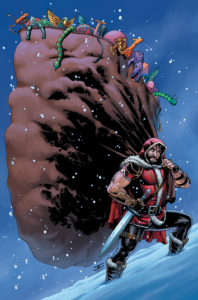 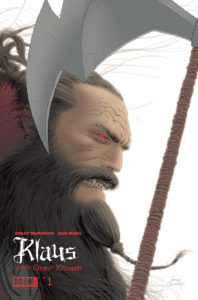