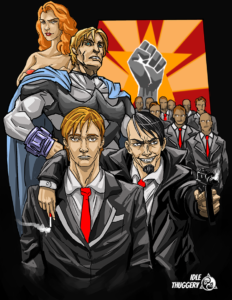 From the Kickstarter page: In the universe of Idle Thuggery, Super-villains aren’t always “evil” and heroes aren’t always “good”. Just because you’re a superhero with bullet-proof skin, doesn’t mean that you won’t get cancer, or that the press won’t rake you over the coals for racially insensitivity remarks. You might be an arch-villain, but you’re multinational conglomerate also provides medicine to refugees in war-torn countries and your bio-tech research has substantially reduced the prevalence of childhood disease in many parts of the world. Heroes can be bastards and villains can be prone to random acts of kindness.
———-

Every once in a while, we at thePullbox will get a preview of an upcoming comic… more of a snippet than a full review copy. For the most part, those quick peeks are tough to review and thus tend to get relegated to mere “preview” status. A sentence or two, along with whatever artwork we get from the publisher/creator(s). Such was not the case with Idle Thuggery… the preview blurb part, I mean. See, I know that we just posted something directing our tens of readers to Thuggery’s Kickstarter page, but after reading the ten page preview received from creator/writer Morgan Quaid I felt that something a little more was needed.

The story starts with a crime. I know, who cares right? Most of these comics start out with a crime, but in this case it’s a little different. There’s no great criminal mastermind enacting his grand scheme for world domination (or maybe just to take over the “tri-state area”). Nope, Idle Thuggery starts out with… well, idle thuggery, I guess. A mugging, plain and simple. Franky has been jumped by what looks to be your average strung out junkie with a knife, the kind of thing happens every day. We spend our lives hoping it just doesn’t happen to us, or anyone we know. But, because Morgan Quaid is a more creative storyteller than that, things get interesting when Joseph “Stinky” Tenenbaum arrives… An acquaintance from grade school, Franky remembers an unfortunate youngster, prone to lapses in bladder control at the most inopportune times. These days, however, “Stinky” seems to be doing a bit better for himself. First of all, he’s got henchmen. Honest to god henchmen, which come in handy when you’re doing things like crime… bags full of money crime. In the midst of said crime, Joseph Tenenbaum- also known as “Silver Hand Operative 29- hands Franky a card, and promises that they’ll get together for some drinks. He also leaves Franky with a job offer.

What could be simpler, right?

I kinda wish I had more to write about, but then it occurs to me that I’ve already found more to run with in this short preview than some more mainstream comics give me to work with in a full 28 page issue. We’ve got the running narrative of Franky. He seems like a pretty decent sort who’s just run into some tough times. We’ve all been there, right? We’re also given a look at gradeschool outcast turned masked criminal, “Stinky” (thankfully, he’s not using that alias for his chosen career) Tenenbaum. For all the preconceived notions people have regarding criminals, he’s a refreshing change of pace. Sure, he steals stuff, but he’s also happy to meet up with an old school chum.

I like the direction Idle Thuggery is heading so far. What I’ve read is well done, characters being treated like people instead of place holders thrown in to fill a preconceived role. What’s more, the art is pretty easy to look at. We weren’t given much in the way of action to go by, but what I’ve seen so far is handled very well by Rain Art Studios. Down the road, when we have more to go by, I might be able to give a little more of an insight into this story that’s off to a good start. The Kickstarter is fully funded, so this book is coming and there’s still time to get on board the train. 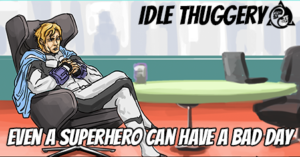 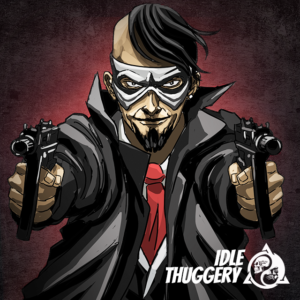 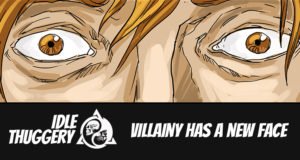