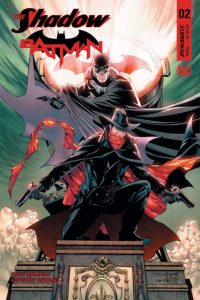 The truth of what the Shadow doesn’t know threatens to destroy his partnership with Batman and Robin just when they need him the most. Three generations of heroes stand at a crossroads as the secret of the Silent Seven threatens to encompass and obliterate them all. To fight the Seven, Batman and the Shadow must force them to reveal themselves. But how do men make moves against a behemoth evil that measures assaults in centuries?
———-

The Shadow, originally a radio show narrator brought fully to life by the writing of Walter B. Gibson in 1931, has a longstanding place among the masked heroes of pulp fiction, and comicbooks past and present. Batman, created by Bob Kane and Bill Finger, first appeared in Detective Comics in 1939 and carries more than a little bit of The Shadow’s makeup beneath his distinctive cowl. Here, Dynamite Entertainment and DC Comics have brought the two icons together in an adventure that creates even more parallels between the two characters.

The Shadow, immortal enemy of the weeds born of evil men, is on the trail of an organization even more steeped in mystery than he is. The Silent Seven, originally the supposed creation of one Professor Moriarty, has infiltrated all levels of our society, using dead men as agents in their bid to rule from behind the scenes. When these walking dead men lay siege to an abandoned outpost of the Teen Titans in New York City, now claimed by Robin/Damian Wayne, Batman is unable to go to his aid. But, where evil walks, so walks The Shadow (cue maniacal laughter…).

This is the crossover that pretty much had to happen, and that fact that it’s happened, not once, but twice is outstanding. These two characters, each epitomizing the role of the uncompromising anti-hero for generations, are cut from the same cloth… almost literally… and that’s never been truer than in this particular set of continuity. As it turns out The Shadow, in one of his many alter-egos, was one of Bruce Wayne’s many mentors, teaching and training him for his career as a crime fighter back in his formative years. As in many such teacher/pupil relationships, they didn’t always see eye to eye, but their differences are going to have to take a back seat if they’re going to have a chance against the latest iteration of the Silent Seven.

Of course that’s after their obligatory knockdown, drag out fist fight…

As easy a sell as the pairing is, there’s still going to be naysayers who take exception to the necessary retcon. In this case, however, I’d like to go on the record as saying that this crossover couldn’t have been more perfect from the start. Steve Orlando has used the backgrounds of these well-known characters to full affect. Lamont Cranston/the Shadow has used many identities over the years, so why wouldn’t one of them serve as a mentor to a young Bruce Wayne, possibly as Cranston searches for a likely successor to his mantle? For that matter, why wouldn’t a young Bruce Wayne seek out a teacher with the Shadow’s very specific skillset to help him along on his chosen path? Finally, Orlando has taken advantage of both men’s very controlling nature to ensure that while they might share a common goal, neither would be eager to accept the other into their world. The meeting and subsequent clash is handled, I thought, as perfectly as could ever be hoped for.

The story is ably helped along by the artistic team of Giovanni Timpano & Flavio Dispenza, with Taylor Esposito’s letters giving weight to the Shadow’s well known chortle and sepulchral voice. The environments are suitably gothic and dark, and the action is very well handled. Everyone knows that both men are head and shoulders above the average unarmed combatant, and when their confrontation gets physical Timpano & Dispenza do not disappoint.

I can’t think of any reason anyone who is a fan of one could possibly not be a fan of the other. Like I said, this is just about the easiest crossover to justify in crossover history, and two issues into this event I am here to say that it’s well worth the investment.

I score it eight Batarangs and an extra creepy laugh… 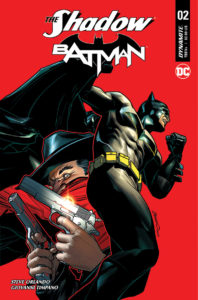 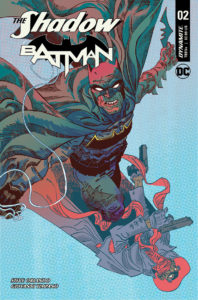 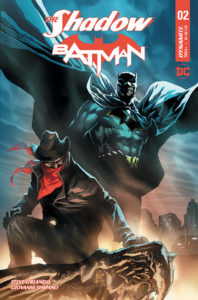 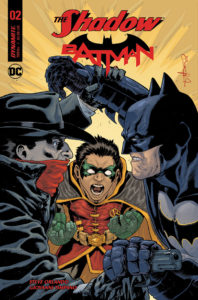