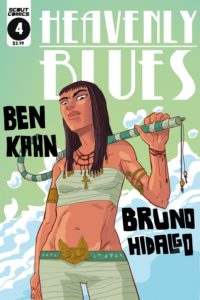 Isaiah, Erin, and their team have done the impossible by escaping from Hell into Heaven. But now they have to earn their keep. Their employer’s schemes and machinations hang over their heads all while confronting Uriel, the savage and powerful archangel they’ve been hired to steal from. Unless the ancient grave robber, Amunet, can decipher the angels’ secrets, the thieves will be locked in a conflict they have no hope of winning.
———-

Once upon a time, five thieves dug their heels in and fought conventional thought: Jefferson the mastermind bank robber; Erin the wrongfully convicted witch; Hideki, master ninja and addict; Amunet, Egyptian grave robber and daughter of a disgraced high priest; Coin Counter the thrill seeking cowboy who embodies the philosophy “if it makes you feel good, do it”. In one way or another, at different times throughout history, they all lived lives that went against the laws of God and man, and they died. For their sins, they were convicted to an eternity in Hell with no possibility of reprieve or parole.

Along comes Barbiel, an angel with a need that can only be filled by the kinds of damned souls who would dare to steal from the vaults of Heaven. He’s gotten them out of Hell and beyond the Pearly Gates, and has given them the location of their target: the secured vaults of the archangel Uriel, veteran of the angelic war against Lucifer and his minions. Barbiel won’t tell them what it is he needs them to steal, but if they succeed he’s promised them salvation and eternal life in Paradise. If they fail, they’ll have all the forces of Heaven, including one really pissed off and especially badass archangel, hot on their heels and out for a pound of flesh. It almost sounds too good to be true, but any hope is worth the risk when Hell is your only alternative.

I don’t normally do repeat reviews in a series, but when it comes to Heavenly Blues I can’t help it. First of all, writer Ben Kahn is awesome and he keeps asking me. Second, and even more important, this is just an awesome series, and I think it’s a moral imperative that everyone read it. If any one of my tens of readers are prompted to pick this title up after perusing this article (I dunno, maybe you missed my other rants), then I’ve done my job and can sleep at night.

In this fourth installment, Kahn continues to explore the history and motivations behind each of his main characters, and the whole thing just gets better and better. The interplay between the characters is outstanding, especially where the relationship between Isaiah Jefferson and Erin Foley is concerned. While everyone in the group has their own reason for agreeing to this job, it’s these two who come across as the most honest (I know… thieves, right?). Jefferson looks at the caper as a chance to live again, though not in the conventional sense. In his mind, it’s the calculated planning, coming up with contingency on top of contingency to pull of the most audacious job of all time: stealing from Heaven! For Erin, wrongfully accused and executed for witchcraft, it’s the promise of seeing the perfection that represents the reward guaranteed in return for living a good and pure life regardless of the difficulties and pain we imperfect mortals run up against, and her disappointment when she finds out that nothing is perfect. This conversation results in one of the greatest lines of the series so far, as Jefferson and Erin are looking out over the celestial grandeur:

As always Bruno Hidalgo’s unconventional but perfectly suited artistic style brings the whole thing together. At first it looks rough, and it may not be something that would work as well in more orthodox comicbook stories, but here it works great. As an added bonus, issue four gives us a bit of action to enjoy as Hideki goes on a bit of a recon mission, and Hidalgo puts the ninja through his paces to good effect. Lest I forget, we’re also introduced to archangel Uriel, and lemme just say now that he’s not what you might expect when you’re thinking of what an angel would look or act like. Once again, Hidalgo uses his particular style to convey the particulars of the character, and the fear that a being like that would inspire.

I don’t know what else I can say about Heavenly Blues that I haven’t already said. If you’ve been reading the series, you don’t need me to tell you to keep at it. If you haven’t, you’re missing out on a great story that in my opinion keeps getting better, with a major focus on a great cast of characters. 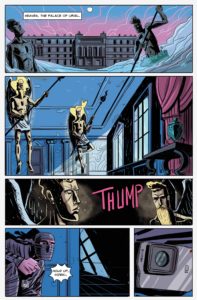 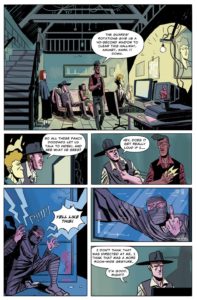 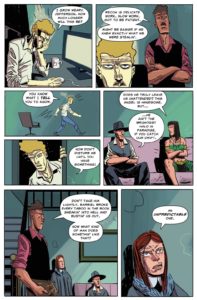