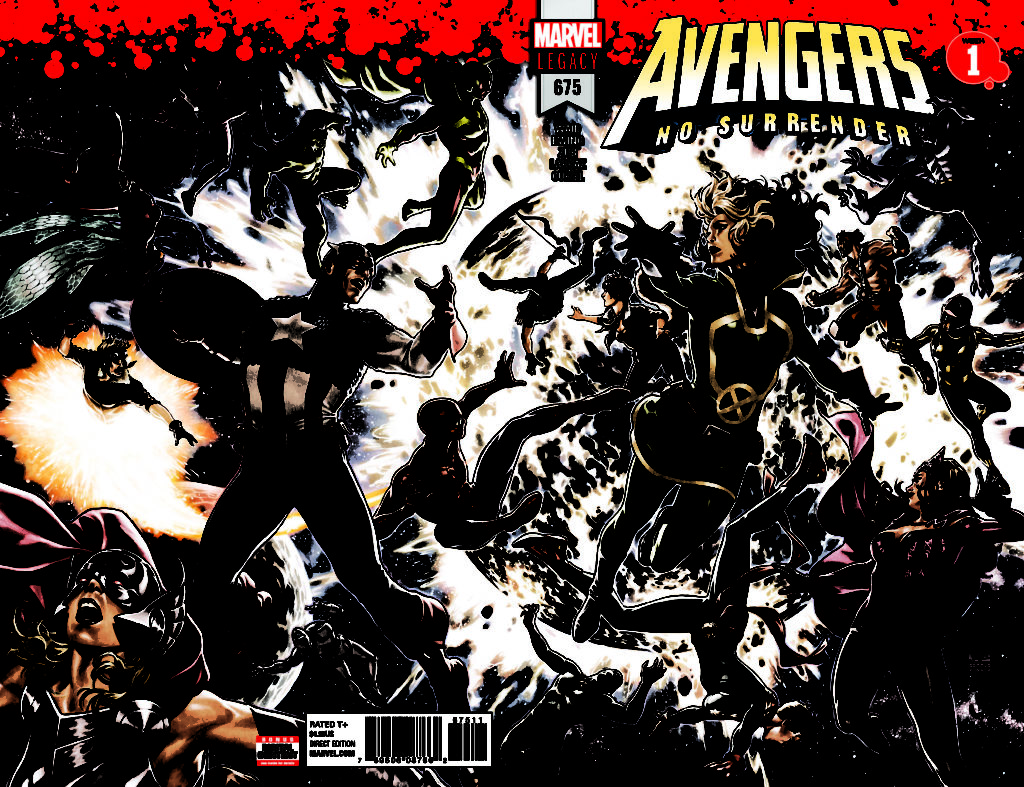 It’s the end of an Avengers Era as we know it! And in the team’s final days, a change has come to the Marvel Universe in the form of a story that’s filled with so much action and so much drama, Marvel had no choice but to make it a weekly epic!

Beginning this January, Marvel will unleash the epic AVENGERS: NO SURRENDER with AVENGERS #675, a weekly saga that unites the casts and creative teams of three titles into an epic tale of heroic action, jaw-dropping cliffhangers, and drastic adventures! The AVENGERS, UNCANNY AVENGERS and U.S. AVENGERS come together in a powerhouse of an event that will be unleashed in a story as spectacular and epic as the Marvel Universe itself.

Featuring one of Marvel’s biggest collaborations to date, each issue will be co-written by superstar writers Mark Waid, Al Ewing and Jim Zub with art by Pepe Larraz for the first month, Kim Jacinto for the second month, and Paco Medina for the third month. With shocking returns and brand new characters, NO SURRENDER is a book where every character will get their moment…where alliances will be forged…and where the earth will be forever changed!

“The Earth has been stolen! That’s the kickoff to the wildest AVENGERS epic ever put to paper, a widescreen adventure with a massive cast and an unlimited budget,” teased SVP and Executive Editor Tom Brevoort. “Avengers past and present will be called upon to cope with a threat spanning out of the pages of MARVEL LEGACY #1. And like that oversized special, there’s a huge character return or two along the way that fans have been asking for—and one that they didn’t even know they wanted!”

From Falcon to Black Panther to the mysterious Voyager, NO SURRENDER will see an appearance from every current Avenger – those we know and love and those we’ve never heard of. But what happens when Lethal Legion and the Black Order battle their way across the Earth? Most importantly, how will this new incarnation of Earth’s Mightiest Heroes come together to fight one of the biggest threats the world has ever seen? This is just the beginning, but there’s so much more to come.

Don’t miss a truly inclusive celebration of the legacy that is Marvel’s Avengers, when NO SURRENDER hits comic shops this January!