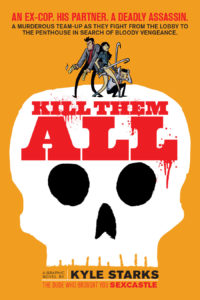 The new gonzo graphic novel love letter to 90s action movies by Eisner-nominated cartoonist Kyle Starks (Sexcastle, Rick and Morty). A betrayed murderess wants revenge. A hard drinking former cop wants his job back. For either to get what they want, they’re going to have to fight their way through fifteen flights of criminals, assassins, drug lords, murderers, yup, even accountants, and… KILL. THEM. ALL.
———-

Meet Mason Iruka. Once upon a time, he was the best cop in the world, kicking ass and taking names for sweet Lady Justice. Now, he’s been suspended for blowing up half the city and shooting a man’s penis off (once again… for justice), and he’s fallen into a self-destructive pattern of drinking and participating in a local fight club called (dun dun Duuhhhn) the Punch Dome. What happens when Kahn, his ex-partner, shows up with a last ditch path to redemption?

Meet Tiger’s Daughter. Once upon a time, she was the greatest assassin working for the crime boss known as Requin. She’s been indoctrinated from childhood to believe that “Requin is good”, and has risen through the ranks to become a legend among the killers, accountants, and killer accountants in his employ. What happens when her boyfriend (also an assassin… don’t think he’s an accountant) dumps her and blows her out a window with a grenade?

Mason and Tiger’s Daughter, two people who would normally be enemies, will have to join forces to achieve their common goal. At first, the ex-cop sees her as a means to an end, the “Charon” he needs to gain entry to the Gates of Hell. Eventually, he finds a kindred spirit in Tiger’s Daughter, summed up eloquently when she proclaims her goal as one of “bloody revenge and kicking… so much god damn kicking. A metric ton of kicking.” Fighting their way through a legion of killers dedicated to serving Requin’s will (he offers a 401K), each will dig deep to realize their full potential and discover something about themselves. It’s like Mason says: “When a problem comes along, you pistol whip it.”

I loved this book on a very deep and visceral level.

Okay, it’s probably not really all that deep, but it was pretty friggin’ cool! The story embraces pretty much every action movie stereotype ever conceived, and it does so with gleeful and shameless abandon. That’s not to say that Kyle Starks hasn’t invested his story of bullets and bloodshed with a little bit of soul. Believe it or not, there actually is some character growth here… and if I’m being honest, probably a little more than was generally seen in most of the action movies I grew up watching. That’s really what this book is, an homage to all of the gloriously cheesy “bullet ballets” and Kung Fu classics that have since gone the way of the dodo bird.

The artwork may seem a little odd for the subject matter, but I’m telling you that it works. Starks’ left of center, cartoony style manages to be dynamic, providing some impressive action sequences… actually just one really long sequence (fans of The Raid: Redemption should appreciate)… while reflecting Starks’ background on the Rick and Morty comic. He embraces both “Gun Fu” and Kung Fu, pulling the reader along with Mason and Tiger’s Daughter as they make their way up through Requin’s high rise headquarters. The end result is that the art reflects the tongue in cheek tone of the story, tying it all together in a bloody bow.

Personally, I’d love to sit down with a bottle of Scotch and revisit some of those movie classics with Mr. Starks. I’m pretty sure we’ve seen most of the same movies, and would be able to quote the best lines right along with the Action Heroes of yore. 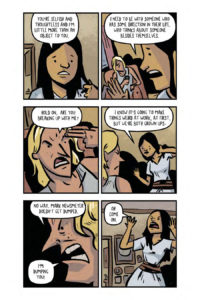 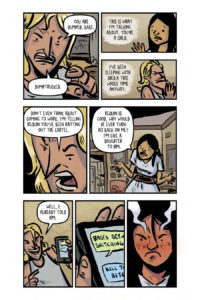 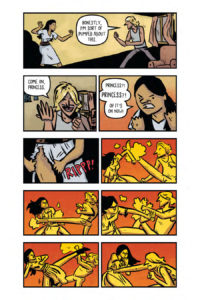 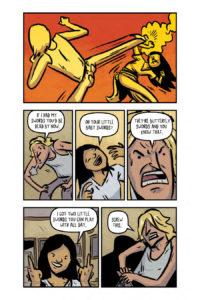 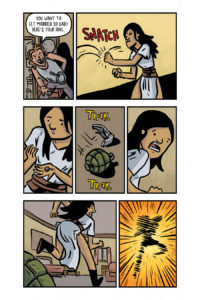 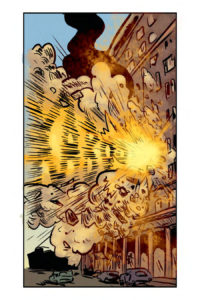