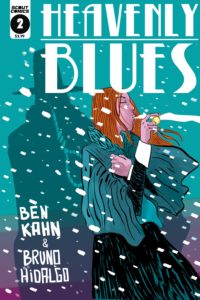 Isaiah and Erin have been given the opportunity of an after-lifetime – steal a sacred treasure from an Archangel, and earn themselves a place in Heaven! But to pull off the job, they’ll need to scour the afterlife for the greatest thieves in eternity, including a feudal era ninja with serious substance abuse problems, a Wild West outlaw bored out of his skull, and an Egyptian grave robber pressed into slavery for her crimes. But with the forces of Hell hunting them down, can these two thieves gather their team in time?
———-

In the first issue of Heavenly Blues, reviewed here waaaay back in April, we were introduced to bank robber Isaiah Jefferson and Salem witch Erin Foley, both serving out eternal damnation in Hell. They’ve been offered a job, from none other than a member of the angelic host, who wants a holy artifact stolen from the vault of an archangel. Sounds like a pretty straight forward deal, said no one in their right mind, and the two aren’t going to be able to pull off a job like this by themselves. Nope, gonna have to assemble a team of the most daring souls ever to walk the earth and Perdition.

This series has been, so far, a blast. The characters are anything but one-dimensional caricatures of what some might think damned souls to be. Jefferson, for example, was a bank robber in life, and a good one. He wasn’t about the power, or the thrill of the heist. His rush came from the plan, the scheme… overcoming the problems unique to each individual job. The theft itself was secondary to figuring it all out. In similar ways, the rest of the crew assembled for this Heavenly heist works through their own motivations to come to the conclusion that breaking into the literal Hallowed Halls is worth the risk. Egyptian grave robber Amunet is attracted by the idea of taking something from someone who believed they were too powerful, above such petty concepts as theft. Ninja master Hideki Iwata is a drug addict looking for a fix, although in Hell that holds a slightly different meaning- his drug of choice is called “Voyeur”, and it allows him to peek in on his descendents, watching over them from the afterlife. Erin, a young girl burned as a witch during the time of the Salem witch trials, has made the choice to never let herself stand idly as a victim, to take control of her destiny for better or worse, no matter how badly the scales are tipped against her. Coin Counter Turner, cowboy rabscallion and ne’erdowell is just plain bored with the afterlife, and is all in for anything to break up the monotany.

The majority of the second issue is spent on backstory, giving readers a little more insight into the cast of characters. That’s a good thing because in the first issue I was left really wanting to know more about Erin in particular. She’s got a pretty serious history, as one might expect from a denizen of Hell, and she brings quite a bit to the table. See, one of the points made in Heavenly Blues is that not everyone damned to Perdition is all evil. In Erin’s case, the character I was most interested in, she was a child accused of witchcraft, and she became the monster she was thought to be. As she serves her sentence in the afterlife, she’s become a ruthless little beast, her physical form stuck at the age she was when she died. After a few hundred years of being overlooked and underestimated because of her apparent age, she’s developed a bit of a mean streak.

In pretty much every way that matters, Ben Kahn and Bruno Hidalgo have put together a great story that has appeal on different levels. First and formost, this is a classi heist caper that would do all Eleven of Ocean’s friends proud. The characters are interesting and anything but stagnant as their stories develop, and the pacing is handled well. To be honest, seeing as I’d gotten my copies of the first two issues back at C2E2 in April, I’d lost track of the actual release dates for the books until I got a message from Ben Kahn, asking if I’d be interested in a peek at issue 3. Then when I found out that issue two hadn’t even been released yet, I had to go back and read both books all over again. And now here we are, all caught up and ready to roll. 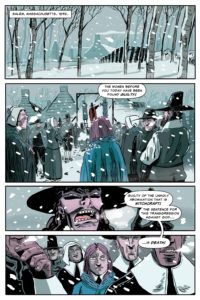 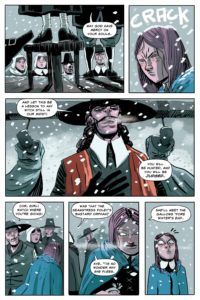 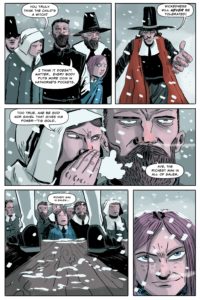