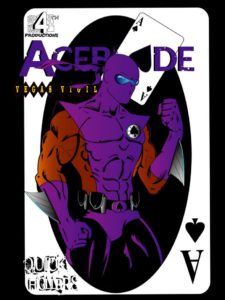 Terrell Durham is one fight away from becoming the Mixed Martial Arts world Champion. But while he fights for glory in the ring, betrayal corrupts Vegas City outside the arena. Can Terrell defeat his rival in the spotlight while a new nemesis emerges from the shadows?
———-

In Las Vegas, the fight game is huge money. To the fighters, it’s more than that. Fighting gets into the blood, into the bone, becomes more than what they do for a living. In traditional martial arts, it’s understood that the art itself isn’t about the violent acts, but is about being prepared for violence. Mixed martial artist Terrell “Dragon-Slayer” Durham is prepared for his fight against reigning undisputed champ, Chris “The Prowler” Fowler. What he isn’t prepared for is the level to which some will stoop to protect an investment.

Titles like Aceblade, true independent books, are what make reading comics a blast. Nothing at all to do with picking up the flashiest looking cover, or the book with the biggest name tied to it, but it’s about running across a book that stands out from the other titles, gets your interest and holds it long enough to get you to crack it open. Face it, out of all the titles even the most avid comic book reader looks over, considers reading, how many of them do you actually get around to?

Well, Aceblade popped up on my Twitter feed the other day, and it was the character design that caught my eye. He just looked cool, so I hit the link and popped on over to his Twitter page. After skimming down the page, I got a bit more into the artwork. It’s not totally polished, but it’s a solid style with a good groundwork to build on. The artistic team of Remot, Kellar, and Dixon handle the action pretty effectively, with more than a passing nod to actual martial arts techniques (kind of a big deal for me as a long-time fan of MMA). Maybe the figures have a little over-emphasis on the physiques, but they aren’t totally over the top… certainly not in the same league as a Rob Liefeld, and he’s done pretty well for himself in his particular niche’ of artistic style.

Aceblade’s narrative does a good job of presenting the origin of a superhero… Taking enough time to present the bones of the story and not trying to reinvent the wheel. Terrell Durham has some things to go through before he makes his debut as the premiere vigilante of Las Vegas, and so too does the writing team of Quick and Hollars. Some of the dialogue comes across as a little stilted, not quite as fluid as it could be, but ask any writer about the most difficult parts of their craft and dialogue is one of the items that’s going to come up more often than not. Polish aside, these two did a good job of crafting an origin story that didn’t lose me halfway through. What’s more, they didn’t take the easy out by presenting Aceblade in all his costumed glory as a splash page at the end of the book- gonna have to come back for issue two to see if Terrell has adopted his new persona.

In the world of independent comic books, “diamonds in the rough” are some of the best finds to come across. Labors of love that they are, it’s great when you find one that hits the right notes with you and manages to make an impression. Hop over to Aceblade’s webpage and see if there’s enough there to interest you… First issue’s free when you sign up for their mailing list, so your chances for a return on your investment have already gone up. 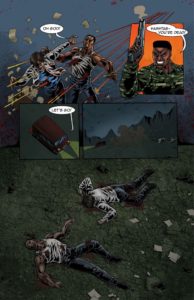 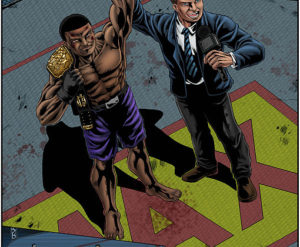 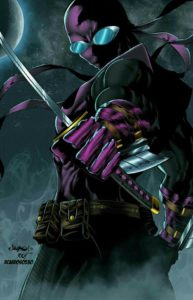