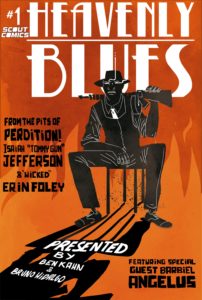 Heavenly Blues is a crime noir comedy by author Ben Kahn and artist Bruno Hidalgo. The greatest thieves in history team up to pull a heist on heaven.
A witty team consisting of a 20’s mobster, an Egyptian grave robber, a Salem witch, and an outlaw from the Old West rise up to steal a treasure hidden in Heaven, the place they were all excluded from.
———-

Contrary to popular belief, Hell isn’t all lakes of fire and sadistic demons heaping their ire on the souls of the damned. First there’s a Fall, after which you find yourself trapped in a crater. As likely as not, there’s someone waiting for you, looking down at you from the edge. This person will then spend an undetermined amount of time laying whatever tortures they can come up with down upon you, until you accept your new situation and realize that Hell isn’t just for those truly evil and worthy of eternal suffering. For some, it’s just where they end up after a lifetime wasted on useless, self-serving pursuits.

Isaiah “Tommy Gun” Jefferson would probably fall somewhere in the middle, if maybe a little more toward the wicked side of center. A bank robber in life, he fell victim to his own over-reaching ambition and the greed of a crew less forgiving of his failures as the Boss. His welcome to Hell was seen to by the young-in-appearance-only Erin Foley, who spent the next few years dredging torture after torture from her deepest darkest imaginings, down upon Isaiah’s stubborn head (kinda hoping we get a little backstory on her). Once he’d pulled himself out of his impact crater, Isaiah and Erin wound up close friends… or as close to “friends” as any of the denizens of Hell could get. Their story becomes more complicate when they’re approached by the angel Barbiel, who has a job offer for the two. Complete the task, and Barbiel promises that he’ll see to their release from Hell, and acceptance into the Kingdom of Heaven.

I don’t really know what I was expecting when I started reading Heavenly Blues, but it sure as hell (see that?) wasn’t what I got. A good story can work its way into the reader’s head on a couple different levels. There always has to be the initial story hook, the thing that brings a reader into the plot and gets them to keep reading past the first couple pages. In some cases that’s all it takes for a book to succeed, giving its audience a well-paced piece of escapism that takes them from point A to point B. I personally enjoy the hell (crap, did it again) out of those stories.

Then along comes a comic that works in a little something extra. Call it philosophy, call it layers of thought. Whatever. Chances are you either know what I’m talking about or you couldn’t care less because escapism is just your thing. Either way, we should all be able to agree that Heavenly Blues has plenty for everybody.

Ben Kahn has crafted a story about two damned souls being offered a chance at changing their current situation. It might not be redemption in the strictest sense, but at the very least it’s an opportunity to reach a better place. Granted, they’re going to have to steal a holy artifact from an Archangel, but there’s no reward without a little risk, am I right? Now that right there is what you call a “plot hook”. The premise is solid, and original enough in its execution to hold any reader’s attention. Not content to stop there, Kahn has woven a few extra bits of metaphorical meat into his narrative for us to chew on. I personally got a kick out of the differing philosophies of Hell’s residents. Where some believe that it’s final resting place for those too evil to belong anywhere else, Isaiah thinks it’s a matter of personal perspective. Some people, while not thoroughly evil, carry enough guilt with them into the Afterlife that it weighs them down enough to land them Down Below, to suffer under the yoke of their own self-loathing. Another interesting idea is in the concept that while not ideal, the lives of Hell’s denizens is at the very least free from the burden of living up to unreasonable expectations in Heaven. It isn’t the most happening place, more of a rundown looking dustbowl than anything else, but people are able to go about their business more or less unimpeded.

One guy even set up a gambling den, but seeing as he was trying to make a living out of cheating the Damned, it didn’t last too long. Apparently in Hell, everyone cheats, and a lot of them are really good at it.

Bruno Hidalgo’s artwork compliments Kahn’s writing very well. It’s a rougher looking style that totally works with the subject matter. He presents exteriors that look like something out of an old Western story, with high mesas and dusty open landscapes that contrast with the more washed out color palettes of the interiors. Specifically, the local “watering hole” that’s the favorite hangout for the locals looks nothing at all like the friendly and welcoming atmosphere of Cheers. Instead, it’s a crowded, cramped space where people smoke and drink, but more so out of habit and lack of options than anything else.

My bottom line on Heavenly Blues is that it’s a very pleasant surprise, carrying more between its pages than a lot of the standard stuff I’ve seen coming from the larger publishers. This is two titles from Scout Comics that I’ve read and gotten more than I expected. It’s a great example of the very cool things you can find reading the smaller independent books out there, while the Big Boys just keep on cranking out rebirths, apocalypses, and civil wars, one after another.

Heavenly Blues is something very different… Come on, the story starts out in Hell and involves ripping off an Archangel. That’s totally worth the price of admission, and seeing as the release date is still a ways off (sorry, I just couldn’t wait that long to post my words…), you’ve got time to get the orders in and save up the allowance… 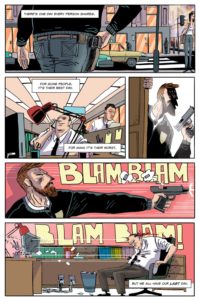 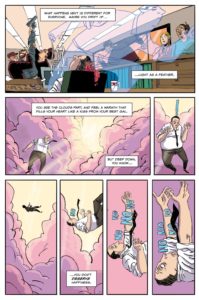 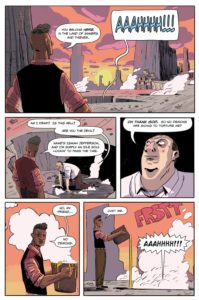