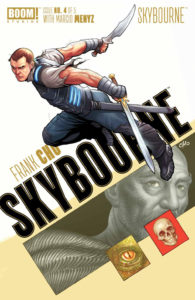 As Merlin takes his final steps to eliminate humanity, Skybourne must contend with not only a dragon, but an ancient unearthed evil in order to defeat the magician once and for all.
———-

Thomas Skybourne has been out of the game for almost thirty years. In that time, he’s kept himself hidden away from the activities of the Mountaintop Foundation, but on hearing about the death of his sister Grace- killed by an Excalibur wielding Merlin (yes, the Arthurian wizard Merlin)- he’s returned to The Vault to resume his active duty. Things may have changed over the last few decades of Thomas’s absence, but for the immortal progeny of Lazarus (yes, the Biblical Lazarus) the death of his equally immortal sister serves as a pretty solid motivation to stick around and get back into fighting trim.

Thomas wants to die, and if going head to head with Merlin can give him the opportunity to accomplish that, so be it. Luckily, Thomas won’t have to wait too long, or work very hard to track Merlin down. The wizard, armed with the sword Excalibur and accompanied by a swarm of dragons, is bringing the fight to the Mountaintop Foundation.

Frank Cho is a rare bird. His artistic talents are, without a doubt, among the best and most recognizable in the industry. Sure, Cho’s controversially and deliberately tongue-in-cheek “Outrage” covers created a stir. His Wonder Woman: Rebirth covers may have created some tension between himself and writer Greg Rucka. None of that has done anything to lessen his skills in my estimation. Between you and me, I think the idea that Cho is more sexist in the way he presents his female characters than many other comic artists is a little ridiculous (again, the “Outrage” covers were a deliberate thumbing of the nose for his critics). When you look at his overall body of work on titles like The Savage Wolverine (my indoctrination to Frank Cho’s talent), and The Totally Awesome Hulk, his talents go beyond just illustration.

When Frank Cho is able to write as well as draw is when he really kicks it into gear. His scripting compliments his illustration… or maybe it’s the other way around… and everything works very well together. What’s more, Cho has a definite knack for comedic writing. If you want proof of that, check out his Sunday comic strip title Liberty Meadows, which very much reminds me of the old Bloom County strip. As odd as it may seem to be in the comic medium, timing is important and in my opinion Frank Cho has it.

I think I’ve pretty well established my credentials as a fan of Frank Cho’s work. Now, couple his writing and illustration with a title that’s been conceived and created, beginning to end, by Frank Cho, and my participation was pretty much guaranteed. It’s a little low profile when compared to some of Cho’s other work, but that actually makes it a little more impressive. Cho worked with Boom! to put together a story that’s wholly his.

Skybourne is, at first glance, a simple action-oriented title that serves the purpose of putting out some flashy fight scenes featuring impressively drawn heroes, villains, and monsters (fun fact: Frank Cho loves drawing dinosaurs). The indestructible and mostly immortal Skybourne siblings have found themselves put through some pretty rigorous paces over the course of the first four issues in this five issue run. Okay, sure… Grace got taken out in the first issue, but she laid some pretty intense beat down before Merlin ran her through with Excalibur. And maybe Thomas has had a tough time getting back into the swing of things, his controlled sparring sessions with the Vault’s menagerie of captured mythological beasts having gone less than spectacularly. All that has just been leading up to The Big Show… that being Merlin’s arrival at Mountaintop’s base of operations. The gloves have been taken off, wadded up into a tight little ball, and thrown unceremoniously into the dirt, and Thomas has no choice but to step up.

If I have any fault at all with Skybourne, it’s that the issues seem shorter than they really are. The pace moves along pretty quickly, and the individual installments are over with faster than their 26-30 pages would lead a reader to expect. Also, the storyline is a little tougher to hold onto than some books, no doubt due in part to the lengthy stretches between issues.

On the upside, the series is very binge-worthy, as it gave me an excuse to go back and re-read the previous issues again. This gave me the chance to settle in and consider some of the underlying themes of Cho’s story- primarily, Thomas Skybourne’s true motivation behind his return to the Mountaintop Foundation. Sure, there’s the apocalyptic consequence of Merlin’s endgame… seems the wizard’s gotten it into his head that mankind has made a mess of things and the world would be better off without us (some days, it’s not easy to refute that logic). But that isn’t really what pulls Thomas back into the game. Above all else, Thomas wants to wield Excalibur, the sword that cut through his sister’s impervious skin and by all accounts ended her immortal existence.

Thomas is tired. He wants to stop the ride and get off. Going out after heroically saving the human race is just a bonus for the rest of us.

I’m not going to belabor the point here. Skybourne is a solid title, with good writing and outstanding art, telling a story with the promise of a pretty major finale. Any fan of Frank Cho should already be reading it, and anyone intrigued by the concept of a pissed off mermaid armed with a railgun should start. 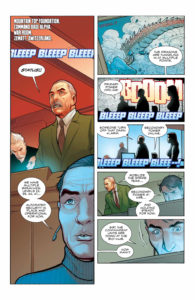 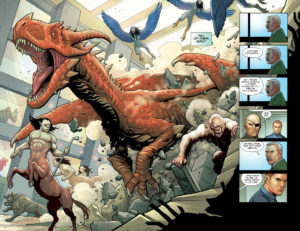 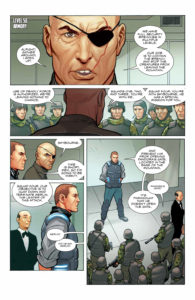 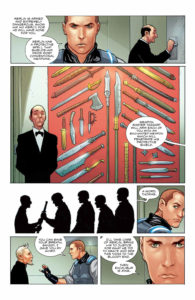