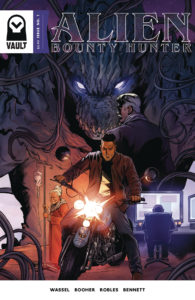 Alien bounty hunter is written by award-winning writer Adrian F. Wassel and David M. Booher, from a story by Levinson and F.J. DeSanto, with gorgeous art from rising star Nick Robles, and produced for the screen by Levinson and Mark Wahlberg.

Ben Madsen tracks down bad guys for a living, and he does it well. Aided by a deep and intimate knowledge of every inch, every shop, every cubbyhole in Arcadia, by an infallible internal clock, and by the technical genius of his partner Brooks, Ben is unshakeable in his pursuits. Everyone knows, if he’s coming for you, you just don’t run from Ben Madsen.

And then comes the job offer that’s too good to refuse, with a promised payout that will take care of their immediate problems and leave them set for quite a while. The job takes them… well, takes Ben, with Brooks tagging along by remote… to Alaska, and puts them… well, Ben… face to face with the stuff of nightmares. No longer on his familiar turf of Arcadia, California, Ben is going to have to improvise, adapt, and overcome in order to find his way through the maze that is Lustrum.

Just what is Lustrum, you ask? Lustrum is the most closely guarded secret, the proverbial “place that doesn’t exist”, an alien penal colony right here on Mother Earth. And Ben’s target, the alien bioterrorist Nyx, has gone to ground there. A human among the galaxies castoffs, Ben Madsen is expected to find and capture his bounty in a week’s time.

In a strange world populated by criminals from all across the galaxy, Ben Madsen must become… the Alien Bounty Hunter.

Okay, go back and read that last line again… only this time do it in your head with the voice of that awesome movie trailer voice-over guy from back in the 80’s. You know the guy I’m talking about, because everyone knows that guy. He made you want to watch the worst movies, the best movies, the cheesiest movies, the most entertaining movies ever made. He would make me want to watch Alien Bounty Hunter: The Movie.

Adrian Wassel & David Booher have put together the penultimate action flick in comic book form. It’s all here: the dialogue, the over the top action sequences, the tough lead character with a heart of gold. It’s even got the gruff ex-boss who spends his time berating Ben, but you just know that he really does it out of a sense of patriarchal love and respect because he knows that Ben is the best there is, and wants to look out for him.

I haven’t even gotten to the art of Nick Robles, which complements the story and dialogue, and would serve any prospective movie director just fine as story boards for the movie that I still wanna see. His action scenes are handled in a very, dare I beat the dead horse, cinematic style that uses angles and perspectives to great effect. It can’t be easy to make this kind of action “flow” across a comic book page, but Robles does it and does it well.

What’s more, between the scripting of Wassel and Booher, and Robles’s great work with a pen and pencil, the world of Alien Bounty Hunter is populated with people that don’t really need a backstory, but seem to have them anyway, even when that history is implied or just brushed over. Even green mohawked Alex, seen in the background of a single panel, who apparently went out with his friends on a mailbox smashing spree, got caught by Ben and is now having to make up for his misdeeds by doing chores for everyone in the neighborhood as needed, doesn’t really read like a simple “throw away” character. Everything and everyone fills a role, to flesh out Ben Madsen and the world around him.

Alien Bounty Hunter shows the promise of being that simple action title that turns out to be anything but simple. There’s depth to be found, with just enough of a glimpse beneath the surface to whet the whistle of any reader looking to be entertained, but not to be spoon fed two dimensional characters. I’m not saying it’s perfect, destined for great deeds, to be recognized in the record books as an American Classic. All I’m saying is that it was a lot of fun to read, and I’m very much looking forward to more from this title.

Hell, I just wanna hang out with Ben, maybe buy him a beer or something… he seems like a pretty cool dude.

And here’s a thing… I read the comic, digested it, and wrote this article up before I even knew that Alien Bounty Hunter was already being looked at for a movie deal. Not only that, but that it’s already got Mark Wahlberg, who by all accounts is pretty excited about the project, attached as a producer (for now). Y’know, come to think of it, I wouldn’t mind having a beer with Mark Wahlberg either. 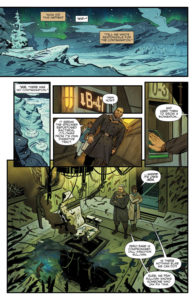 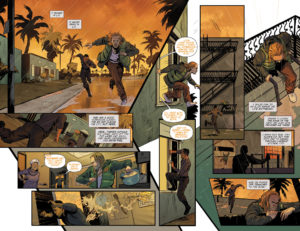 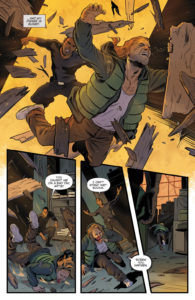