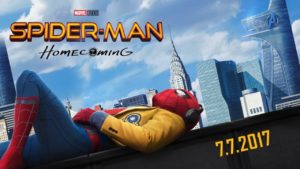 Like many comic fans of my generation, I had my Spider-Man phase.  There was a  time when my favorite hero was Spider-Man, my favorite villain was Venom, Aunt May was old, Peter Parker worked as a photographer, and Todd McFarlane still drew comics. Then the drain was circled by Clone Sagas and cruddy movies.

The draw to Spider-Man, to me, was always Peter Parker.  Pete was special because he was just your average high school nerd. He was a confused, socially awkward high school student who was frequently bullied, and if his classmates only knew what he was capable of they would have worshiped him. And this flawed teenager with superhuman abilities, a rogue’s gallery of enemies, and an off-the-charts IQ empowered me, and he did so because, with a few slight variations, he was me. He was us. He was every outcast nerd from public high school. Peter Parker was special because he wasn’t special, and when you don’t feel special as a kid, having a role model is a powerful thing. That was the draw to Spider-Man, and somewhere along the way the movies lost that.

If you want the spoiler-free version of this review here it is: Spider-Man: Homecoming is a good movie you can enjoy with the whole family.

End of spoiler free review. Continue at your own risk. 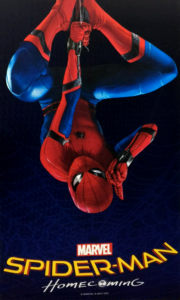 As SPIDER-MAN: HOMECOMING began, I saw something I’d never seen before in a big-screen version of the web-slinger. I saw the Spider-Man I grew up reading, with the bad jokes, rash decisions, attempting to balance school, family, work and superheroing so unsuccessfully that it breaks him down and he wants to give up, but he can’t. And my inner child squealed with glee.

This is a Spider-Man still figuring out the range of his powers, all of which are humorously amplified (and somewhat hampered) by a new suit designed by Tony Stark (a mentoring turn by Robert Downey Jr., in an extended cameo, but his presence and influence permeates every square inch of this film). Peter Parker (played by the great British actor Tom Holland, from THE IMPOSSIBLE and the recent THE LOST CITY OF Z) plays the awkward American teenager perfectly. 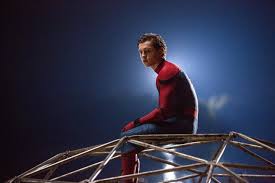 Another thing I loved about this movie is that I didn’t have to sit through another origin story. There is a mention of Peter get his power by a spider bite, and some humorous questions by Ned (Jacob Batalon)that follow, but that’s it. All of what made him a superhero has already happened. There’s a vague mention of the rough time his Aunt May (Marisa Tomei) has had, and in one scene, In fact, you can fully enjoy SPIDER-MAN: HOMECOMING with even having seen Spider-Man’s fantastic re-introduction in CAPTAIN AMERICA: CIVIL WAR because that’s recapped through Spider-Man’s vlog beginning of the film. That’s right, a vlog.

One thing that is made very clear here is that Spider-Man is unique in the superhero world. He didn’t ask for the hero’s life. He didn’t build a special suit or train for years. They never say it, but this movie bleeds, “With great power comes great responsibility.” 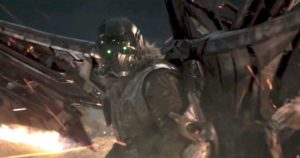 I particularly like the film’s set up, which begins years before Civil War or even before Peter Parker is bitten by a radioactive spider. An opening sequence set immediately after the events of the first Avengers movie, with the shattered remains of alien technology scattered across Manhattan, shows us a salvage operation headed by Adrian Toomes (Michael Keaton, a living legend), who is about to start cleaning up the mess when they are interrupted by a government group known as Damage Control (and nerds rejoiced), responsible for keeping this potentially dangerous tech out of the hands of civilians. Toomes is pissed at the loss of income and manages to steal a few valuable alien power sources on his way out, eventually creating a black market for human-alien hybrid technology, which he himself uses when he straps on an impressive set of scary-looking wings to become the Vulture.

As mentioned, we also get a summary of Spider-Man’s adventures at the Berlin Airport during Civil War. Stark has promised to keep in touch and call Peter when he’s needed for his next mission, but the call never comes. Peter does occasionally get to speak to Stark’s right-hand man Happy Hogan (Jon Favreau), who isn’t the least bit interested in taking Peter’s calls but is still fun as hell to watch. Like any other kid that did something awesome, Peter is a changed kid (he’s meant to be 15 in this film), and he seems keenly aware that a bigger life awaits him. Peter wants a life that Stark believes he isn’t quite ready to lead, and like every other 15-year old kid he’s bucking authority.

Director Jon Watts (COP CAR) obviously cares as much about portraying school life accurately as he does about the big action set pieces. Casting some fine comic talents in the roles of key teachers in Peter’s life, Martin Starr is especially funny, as well as an interesting group of friends for him to interact with is key to establishing this part of Parker’s world. In addition to Ned, there’s also Peter’s big crush, a girl named Liz (Laura Harrier); the strange outcast Michelle (Zendaya), who is as smart as she is weird, Liz’s best friend Betty (THE NICE GUYS’ Angourie Rice); and there’s even Flash (THE GRAND BUDAPEST HOTEL’s Tony Revolori), who is a step away from the “jock bully” and replaced with “rich kid bully”. 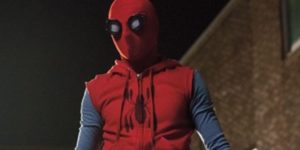 Fans of the Spider-Man comics will pick up on the classic rogues that make up Toomes gang—including Michael Chernus as Phineas Mason aka The Tinkerer and the designer of most of the hybrid weapons that the Vulture sells; and Bokeem Woodbine as the Shocker, minus the dopey comic-book costume. Along with the Vulture, the rogues move from place to place where shipments of valuable tech can be stolen. There’s mention of them grabbing up gear from the debris-heavy Triskelion demolition in D.C.; there’s talk of picking up the pieces after the Sokovia disaster; and the big heist attempt at the end of the film focuses on the last load of weapons and other fun toys going from the old Stark/Avengers Tower to the new headquarters in upstate New York.

In essence, the film is a street-level view of the Marvel movies to date, hovering somewhere in between the Netflix series and the world leveling Avengers films. This is where a Spider-Man movie belongs. Anytime in the comics when the web-slinger was involved in big cosmic events (e.g. Infinity Wars, Secret Wars) he seemed really underpowered and out of place. This film is about what happens when the dust settles, and the vultures come to pick the bones of what’s left in the rubble (pun intended).

Keaton is astonishing here! In my opinion, he’s the third best Marvel cinematic villain (first being Hugo Weaving’s Red Skull, secondly is Tom Hiddleston’s Loki) and his motivations for keeping this dangerous business going are tough to argue. He’s not in it to destroy lives or because he’s evil; he’s trying to provide for his family, just as he was years earlier when he worked a legit job. He’s not a terrible person, ar first, but you see his descent into darkness. The movie’s tensions pick up as Toomes and Parker find out secrets about each other. The Vulture lives through the entire film (another great thing about this Spider-Man movie is that they are not killing off a great villain) makes it into the post-credit scenes (there are two). 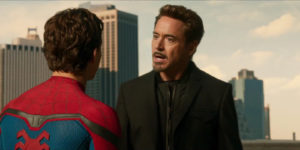 Stark’s role in Peter’s life is as a super father-like figure that wants the best for Peter but wants him to work for everything get has. Stark is also struggling with his own, “With great power comes great responsibility” in that he feels responsible for all of Peter’s success and failures. There is a feeling that Stark is looking for the next boy-genius that he can pass the torch to. Which makes me wonder if that will play into Robert Downey Jr’s exit from the Marvel Universe. 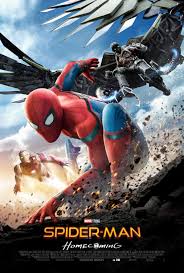 All of these elements combine to make SPIDER-MAN: HOMECOMING a spectacular movie that is entertaining and one of the funniest Marvel movies to date (but not as funny as Ant-Man), while still taking everything quite seriously, both in terms of the debt it owes to the early comic books and the struggle that Peter faces in every aspect of his life. Holland embodies Peter Parker and I believe he’s the best actor to portray the role. He taps into that hormonal energy that is only amplified with these powers, and in those few moments when he does feel confident, the inexperience of youth puts him back in his place. In classic Parker/Spider-Man fashion, the kid also loves to run his mouth when he should be paying attention, a needed trait for a good Spider-Man 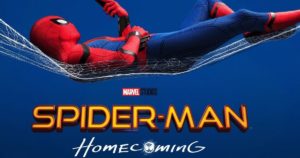 Overall the creators have packed this film with good times, great enemies, and enough detail to keep devoted, long-term fans happy, as well as those living under a rock that never heard of Spider-Man. It’s nice to have this iconic hero in the hands of a production team that is treating him right, by bringing him back to his roots where he can interact with other Marvel heroes. SPIDER-MAN: HOMECOMING is as perfect a character piece as I’ve ever seen. Like CAPTAIN AMERICA: FIRST AVENGER this movie fires on all cylinders.