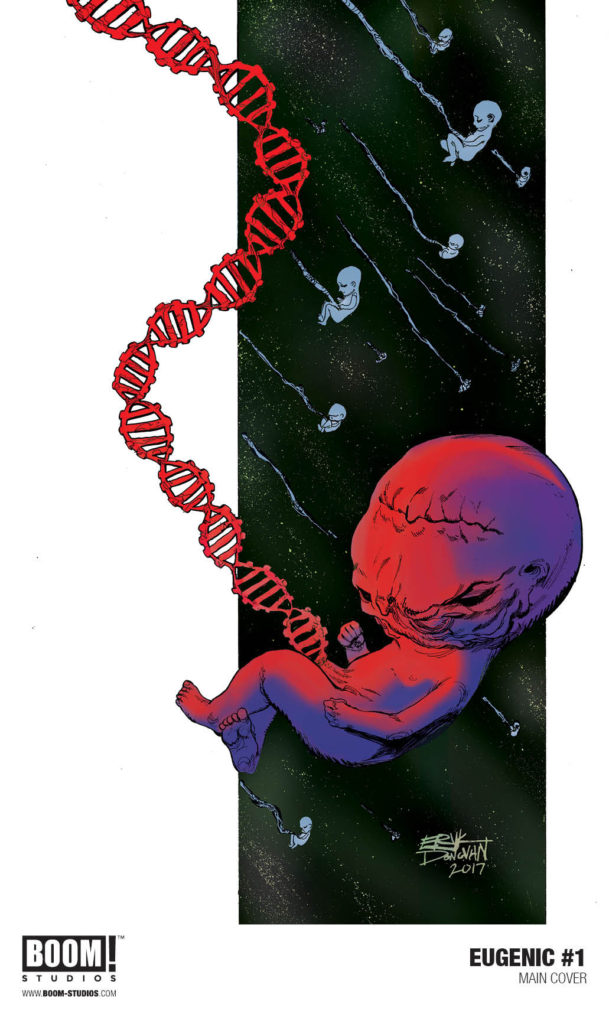 BOOM! Studios is excited to announce EUGENIC, a dark vision of humanity’s future from the award-nominated team of critically acclaimed writer James Tynion IV (The Woods, The Backstagers) and artist Eryk Donovan (Quantum Teens Are Go, Constantine: The Hellblazer). The limited series is the third installment in the duo’s Apocalyptic Trilogy, following 2014’s Memetic and 2015’s Cognetic. Like those series, Eugenic will feature three, oversized, 48-page issues and debut in October. 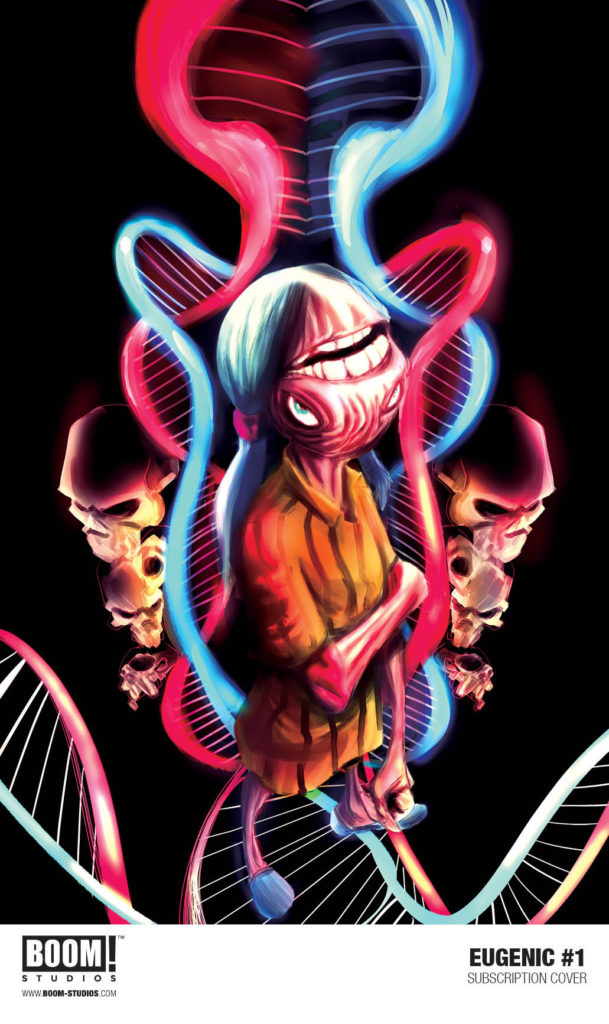 When a plague ravages the world, one scientist discovers the cure and becomes the savior of mankind. Hope is restored, and the world rebuilds. But then people who took the anti-virus begin having children who are… unnatural, and the definition of “normal” is forever altered.

“In December 2012, when my comics career was in its infancy, I challenged myself to imagine a kind of horror story that I had never seen before,” explained James Tynion IV. “And all in one night, three bizarre concepts came to mind, and I raced to my computer to start jotting them down in a series of documents that would ultimately become the basis for Eryk Donovan and my Apocalyptic Trilogy.

“The first two ideas were the most direct, and I knew how to bring them to life. Memetic and Cognetic explored the horrors of being made small—understanding that no matter how unique you believe yourself, we are all fundamentally the same, and when the apocalypse came—whether by an inexplicable Sloth image on the internet that drove you insane, or an alien hive mind looking to extend itself across every brain on the planet—we would all die at the same. They explored the horror of realizing a kind of inescapable homogeneity.

“Eugenic was always the most difficult concept. The most raw. The most dangerous. Rather than an apocalypse unleashed upon the world from external forces, it is an apocalypse that we unleash upon ourselves. Rather than taking place over a handful of days, each of the three issues are hundreds of years apart. This is an apocalypse of good intentions and the horrors of sameness being allowed to take hold. In literal terms, it is the story of a monstrous new breed of humanity created by a misguided scientist looking to save the world and erase prejudice. Ultimately, these characters learn that hate cannot be genetically engineered out of a species. In the end, we are our own apocalypse.“

Eryk Donovan added, “For our final apocalypse, we wanted to do something a little different. Eugenic is a much more physical tale than Memetic and Cognetic, and with that will come all sorts of lovely body horror, disturbing visages, and creepy weirdness. It’s crazy and dangerous, and we’re going to blow your socks off. Welcome to the world of Eugenic!”

“When James and Eryk first pitched the concept behind Eugenic, it felt like the room got a little darker,” remembered Jasmine Amiri, Editor, BOOM! Studios. “With an entirely original concept that feels relevant in today’s political and social climate, it’s the type of story that silences your brain and makes you glad to not be living in the world you just read about. Which is to say, I’m pretty sure James and Eryk accomplished exactly what they set out to do—to freak us all the way out.”

Readers who would like to catch up on the Apocalyptic Trilogy can read the collected editions of Memetic and Cognetic, which are available in print and digital format.

Eugenic #1 features a main cover by Eryk Donovan and a subscription cover by Robbi Rodriguez (Spider-Gwen).

Eugenic is the latest release from BOOM! Studios’ eponymous imprint, home to a diverse group of original and licensed comic book series, including The Woods by James Tynion IV and Michael Dialynas, Klaus by Grant Morrison and Dan Mora, Grass Kings by Matt Kindt and Tyler Jenkins, Mighty Morphin Power Rangers, WWE, Big Trouble in Little China, and Planet of the Apes.

Print copies of Eugenic will be available for sale in October at local comic book shops (to find a shop near you, visit comicshoplocator.com) or through the BOOM! Studios webstore, and digital copies can be purchased from content providers including comiXology, Kindle, iTunes, Google Play, and the BOOM! Studios app.

Discover your breaking Road to San Diego news from BOOM! Studios by visiting www.boom-studios.com and following @boomstudios on Twitter.