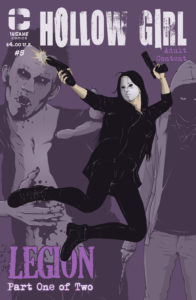 Katherine Harlow never had much of a chance. As a child she was cursed with an abusive father and an indifferent mother, until her young mind cracked. At the urging of her dead grandmother (you heard me), ten year old Kat murdered her parents with a kitchen knife, and wound up being housed at Hellingly Psychiatric Hospital. Just a couple years later she escaped with the help of the deranged Father Patrick Skelton, and was trained to become an instrument of the Lord’s will (ie: Father Skelton sent her on a killing spree, directed by him). Now back in Hellingly, Katherine is once again in treatment. While she still sees the dead, mainly the bloody specter of Detective Midwinter, she’s doing her best to ignore them. After all, according to her psychiatrist Dr. Pearson they’re all just manifestations of her own tortured psyche.

Wow… back into the twisted, and dare I say “Insane” world of the Hollow Girl, and the grim setting just keeps on digging deeper. We find out just how big a piece of crap Kat’s father was, and get the final piece of her chilling origin story. Grim just doesn’t seem to cover it. What makes this ultra-adults only story work is the way creator/writer/artist Luke Cooper continues to twist things around… Is Hollow Girl a tale of Katherine, the girl turned psychopath through a lifetime of being used and abused at the pleasure of one sick father-figure after another? Or is it really a story of the supernatural, where a girl with no soul serves as an empty vessel, to be occupied and utilized as a tool of revenge for spirits of the slain?

That’s a question that’s yet to be fully answered, and given the direction of the next story arc, it might have to wait a while longer. There are four seemingly separate serial killers at work in the city, each of them seeming to follow the patterns established in cases that have long since been solved. The only things connecting the four killers are that they’re all dead, and that each case was solved long ago by retired homicide detective Christian Blackstone.

Hollow Girl continues to find a pretty good balance between a stark (and dark) visual style, and a storyline that keeps unfolding in directions that keep the reader a bit off-balance. The violence is brutal, but the worst is left just out of the range of the panels, leaving readers to fill in the horrific blanks for themselves. All the while, poor Kat is left in the middle of it all and continues to be pulled in different directions with no real control over her life. Cooper’s pulling double duty on his title, as writer and artist, and if he keeps it up he might be solely responsible for a runaway indie hit, as well as a few unpleasant dreams.

Hollow Girl is most definitely not going to be for everyone, but for those interested enough to give her a look, this title is sure to provide a ride that isn’t like any other in comics. Once again, Insane Comics and Luke Cooper provide proof positive that playing it safe in the mainstream is best left to the big publishers. 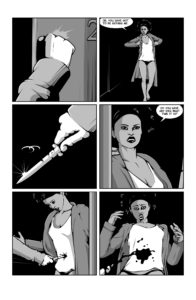 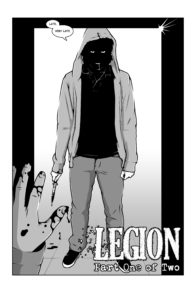 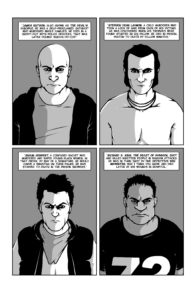