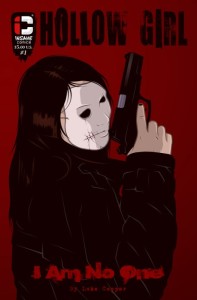 Kat is just a girl trying to make her way in the world. Her tragic story starts with a double homicide, leaving her orphaned at very young age. Alone in the world, she’s turned over to the state and gains the attention of a sympathetic psychiatrist who wants to help her with her problems. See, Kat’s problem isn’t just that her parents were murdered, it’s that she did it, confessed to it, and felt absolutely nothing about it.

Kat has no soul. In clinical terms, she’s a textbook sociopath. The church has another theory… Kat is hollow, created soulless, and therefore open to whatever wandering spirits might want to hop in and take her for a drive. The whole scenario presents some interesting questions. Clinically, Kat absolutely and without a doubt needs help, and with her history of extreme violence that help is not something that’s either optional or voluntary. Again, certain factions in the church disagree, believing Kat to be an empty vessel that could be used in the cause of righteous retribution.

Being hollow, Kat does indeed spend much of her time possessed by the spirits of the dead… but not just any spirits. Through some twist of fate, Kat is sought out by the of victims of crimes left unsolved, of wrongs so heinous that the law would never be able to balance the scales. The possessing spirits protect Kat as she becomes their puppet. The spirits are able to keep her alive through injury, to heal her as she exacts their revenge. This might not sound like a great deal from your perspective, but Kat has a different opinion. When she’s possessed by the dead, when they are filling that empty place inside her that would normally be taken up by a soul, she’s finally able to feel. For a very short and often bloody, violent time, Kat isn’t alone.

Hollow Girl is a layered story, filled with creepy images and concepts. The artwork upholds that ideal, with every character in the book looking… not right. Without exception, everyone populating the world of Hollow Girl looks like they’re right out of a music video for a Goth metal band. When I was reading this book, it occurred to me that the character designs had to be deliberate, and I came up with the personal opinion that the characters are drawn to reflect their psyche… Let’s face it, in a book like this most of the people we’re going to be seeing are damaged, traumatized, or just flat out evil. In Hollow Girl, it seemed to me that Luke Cooper just took the inside, and drew it on the outside, for great affect.

Bottom line, if you’re interested in something “feel-goody”, this ain’t it. Looking for something “morbid and creepifying”? Hollow Girl should fit that niche nicely. 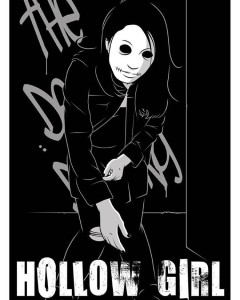 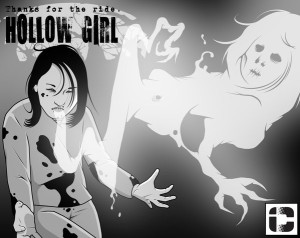