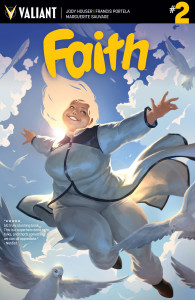 On Sale Now!
Just as she uncovers a conspiracy in the Hollywood Hills that threatens the lives of her fellow psiots and new friends alike, Faith must also deal with the return of her ex-boyfriend and one-time teammate Torque…and a volatile new alien threat that nobody saw coming!

Faith’s life just gets better and better. With saving people keeping her up late so that she’s tired at her office job, she gets stuck watching her ex-boyfriend’s reality show and later tries to enlist him in her cause. It’s been a disappointing day all around, so she tries to do some old-fashioned investigation and now we’re into the real guts of the story.

Still super impressed with Jody Houser’s very real writing. Faith is a normal girl with two jobs – she juggles finding content for a website with being a superhero, and trying to make it all work. Thankfully, she has people who care about her in her life like her friend X. She also has a bit of baggage (like most people), and bad guys who want to kill her (unlike most people). Except for the superheroics and murderous bad guys, she has a pretty normal life. I applaud how well-adjusted and honorable Faith is, because it could go a different way and doesn’t.

The Porrela/Sauvage art team, for real life/fantasy life scenes, are continuing to tell great sequential stories. I might love the most that Fantasy Faith isn’t really different from Real Life Faith except for the occasional goddess dress, but that’s to be expected. It’s still very “bright and sunny California” but make no mistake that serious stuff is going on.  The scenes with the imprisoned psiots are just as impressive as Faith’s fantasized wedding to Chris Chriswell.

Loving this book, and so looking forward to the next installment! 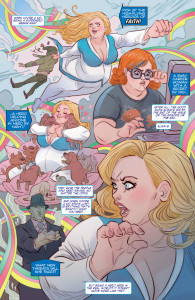 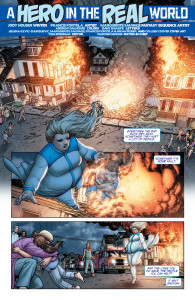 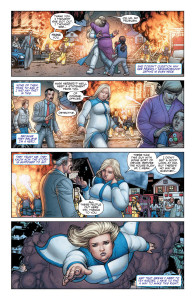 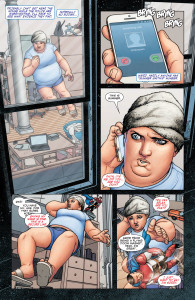 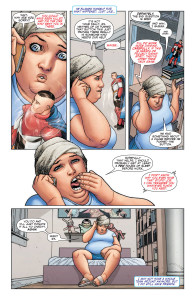 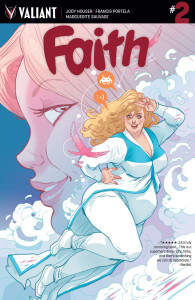