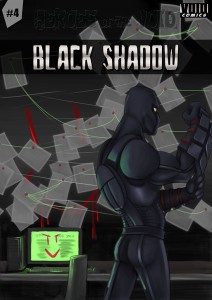 The story so far…
Five years ago a serial killer emerged in California, murdering women and staging them in a very specific manner. He signed his crimes with a smiley face drawn with the blood of his victims. The press dubbed him “Red Smile”. Brian Warner, the lead investigator in the case, spent the last five years hunting him. In retaliation, Red Smile killed Brian’s family before Brian got home. Brian went after the killer and found that Red Smile has a fan club of people who kill to impress their idol.

Now Brian has to take things to the next level…
———-

Black Shadow is the next in a long line of cops turned vigilante. As Brian Warner the law enforcement officer, hampered by procedure, there was only so much that could be done to track down Red John… I mean Smile. As the Black Shadow, Brian is able to take steps outside of those allowed by the law, to seek justice as well as vengeance for all of the killer’s victims and for his own family in particular.

Striking similarities to shows like The Mentalist and The Following, Black Shadow comes across as a decent comic. Overall, the writing by Ezekiel Rage is smart and moves the story well. At a few points, the dialogue might not come across as completely natural, but those points are minor. I think what really sells this book for me is the artwork by Douglas Russel. It has sort of a stylized, rough around the edges look to it, which I think works well in this book. Russel also does a pretty good job of conveying Warner’s conflicted emotions, especially in a conversation between him and his best friend and partner.

Black Shadow is one of those independent books that might not be perfect, but it’s a good introduction to some talent deserving of the attention. Books like this, as well as the smaller publishing companies like Void Comics, are what keeps the comic book industry from completely going stagnant. It’s like listening to an old vinyl record, versus hearing the polished and totally clean sound from a CD or MP3. If the industry was all Marvel and DC, I personally would miss the proverbial glicks and glucks of the less polished, but no less entertaining content coming from independently published talent. 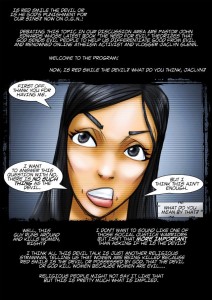 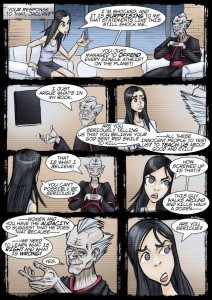 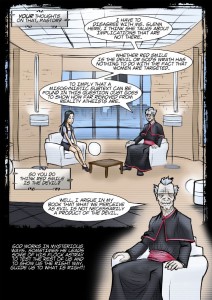