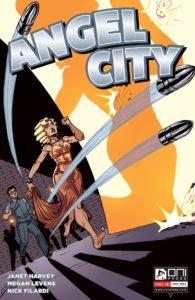 On the run from the law, Dolores and Joe have more heat than they can handle as they dodge bullets in Little Tokyo, and studio smears in the papers. But they discover hope in each other – and find some unlikely allies in a Boyle Heights garage.
———-

On a dark and stormy night (okay, it was night) aboard the Queen Mary, and ace reporter Dolores finds herself waist deep in trouble. Waking up with a whopper of a headache, a smoking gun in her hand, and a corpse on the floor next to her, she knows one thing for sure- she’s been set up to take the fall, and whoever did it is connected. With no other choices worth a damn, she goes on the run. Dolores jumps overboard amidst a hail of gunfire, taking one in the arm for her trouble. From there, she makes her way to the apartment of fellow reporter (and budding romantic interest) Joe Yoshimoto, and at every step she has crooked cops Mertz and McGrath hot on her heels.

The life of an undercover reporter isn’t always eventful. There are a lot of stories that don’t involve police corruption and murder, but don’t worry… this series isn’t about any of those. What this series is, is one of the finest examples of crime noir I’ve ever seen in comic book form. All of the elements are there, from the shady conspiracies to the dirty cops, and the plot is a fast moving series of twists and turns.

Where Angel City breaks for the normal noir elements is in its refusal to accept some of the more common stereotypes. While Dolores might be in “distress”, she’s definitely no “damsel”. She’s a fast thinking, fast moving woman of action, more than capable of handling her own dirty work instead of waiting around for a man to come to her rescue. It’s a good thing too, because from the time Dolores wakes up next to a cooling corpse, she’s having to double time it to stay one step ahead of her pursuers.

Set against the backdrop of 1940’s Los Angeles, Janet Harvey and Megan Levens have no lack of material to pull from. Anyone at all familiar with the time period knows that the word “scandal” had practically lost its meaning amid the corruption of the not-so-aptly named “City of Angels”. It’s that atmosphere that Harvey and Levens dive into with enthusiastic energy.

The writing manages to skirt a very fine line between the lingo and attitude of the period, and the tastes of modern readers. She stays true to her source material without losing everything in overdone “James Cagney-esque” dialogue. What’s more, the characters are all treated with more regard than most of them could have expected from the classic noir tropes. Dolores plays neither the helpless dame, nor the vamping femme fatale, and it makes her much more interesting and relatable. The same holds true for the rest of the cast, both supporting and background. Everyone serves a purpose, and no one is there just to fill a benchmarked slot.

Now, onto the artwork. In my opinion, Levens produces some very impressive work. Her style brought to my mind the old serialized newspaper comic strips of the detective mystery variety, or maybe more recently that used to outstanding effect in Batman: the Animated Series. Her character designs keep everyone diverse and distinct, and utilized the style of the 1940’s to great effect. What’s more, she manages to use facial features and expressions to communicate emotion and personality. That isn’t something you really see very often in this more cartoony style.

Sadly, I did miss out on the beginning of this series, but now that I’ve gotten a taste that might be something I’ll have to rectify. Angel City is a great example of what can be accomplished when creators dip into genres that don’t usually get much attention in comics. 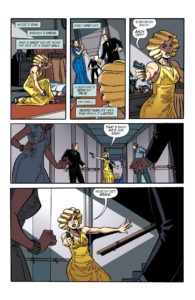 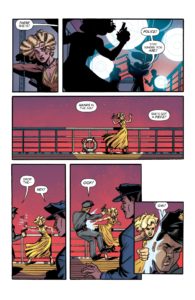 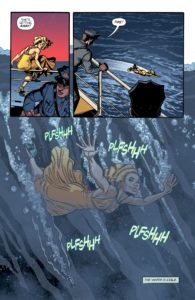