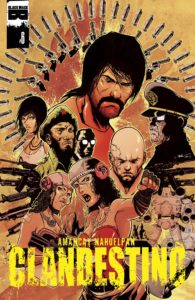 Synopsis: The country of Tairona became a no man’s land after the military coup. Guerrillas were formed across the lands, and rebels unified against the dictator to resist the regime. The hopes of many lay on CLANDESTINO, who barely escaped from the military attacks as a child, to lead the revolution.
———-

The oppressive regime that’s ruled the country of Tairona for the last 43 years is under attack. The rebels have bided their time, gathering their forces until the time was right. Now, led by ex-soldier Niko, they’ve poured into the capitol in an all-or-nothing campaign. If General Saverio Kapala can’t be dragged down from his seat of power, there won’t be anyone left to stand in his way. In the face of overwhelming odds, the people can only see the prospect of their country, freed from Kapala’s reign of terror and given over to the hands of its citizens.

I get a lot of comics for review, and of those I’m only able to look at maybe half of them. Of the ones that I give a look at, I don’t always finish them and the ones that I finish I’ll write something up for about 1 in 4. With all of those books, I try to spread it out between publishers and genres, always looking for something that stands out, that’s a little different, and I never write a review on a book that doesn’t give me something to like.

I think Clandestino hit pretty much every mark for me. The brainchild of creator/writer/artist/letterer Amancay Nahuelpan (jeeze, over-achieve much?), this book is as relevant as it was entertaining. My only problem is that I hadn’t caught onto it until this final issue in a six issue run- a problem I have every intention of fixing in the near future. Granted, most of this crescendo of an issue resembles any one of the Expendables movies, heavy on the gunfire and explosions, but that doesn’t mean the drama of a good story is left out.

General Saverio Kapala took control of Tairona in 1973, and has crushed it and its people under his totalitarian rule ever since. His brand of control and pacification includes pretty much every atrocity they have a name for, and he gives his military/police free reign to make a few up if they feel inspired to do so. If you were to take a look at some of the international headlines, you’d probably find stories very much like this one, but without the security of knowing that “it’s just a comic book”. Nahuelpan tackles it all, every uncomfortable truth, walking the fine line between underplaying the realities of similar real-world regimes and allowing his subject matter to go over the top with the graphic content.

Having missed out on the previous issues (something I’m looking to rectify), I don’t have a huge frame of reference for the characters, but their stories are still laid out effectively. I still understood that Niko is an ex-soldier who committed the ultimate sin, falling in love with a woman and turning his back on his former life. I saw that Kapala’s top enforcer Vilcun used to be Niko’s friend, and sees Niko’s new allegiance as the ultimate betrayal. And, maybe most importantly, I understood that Kapala himself is essentially a bully and a coward, ready to sacrifice any of his people in order to keep himself safe, his power secure. All of this is worth mentioning because it’s a testament to Nahuelpan’s writing, in that he’s able to convey established information for new readers without bogging down the story with recaps.

The artwork… oh man, the beautifully chaotic artwork, capturing the orchestrated violence to near perfection, is a testament to what can be achieved between paper and pen. Aside from the larger scale violence, with helicopters and tanks exploding, buildings collapsing into rubble, I was impressed with the smaller scale. In particular, the fight between Niko and Vilcum… This throw down was as epic and visceral as anything I’ve seen choreographed for the big screen- and believe me when I say that I’ve seen a lot. These two guys were going at each other with nothing but bad intentions, and in a couple of the panels I could almost hear the sound of snapping ribs and crunching nose cartilage.

Don’t let the violence push you away from this book, if that isn’t totally your thing. The action isn’t the crux of the story. The real story, as is highlighted very well in a full page spread of a newspaper article covering the rebellion, is in the determination of a people to take control of their country. The fact that the vast majority of the rebels fighting are women tells another part of it, and should indicate the depths to which Kapala had dragged Tairona in his 43 years of oppression. Yes, there is a lot of violence… a LOT… but for this kind of story, there really has to be. Dictatorship is only possible with the suppression of, and utter control over the people. Once that fails, the only real answer is going to be anything but pretty.

By all means, take a look at this book, if you haven’t already… It could have been pulled from any number of headlines, from any of half a dozen global “hotspots” we read about every day. Take what you will out of it… Clandestino works as an all-out action book, as well as a mirror to reflect some very hard to accept realities out there in the world.