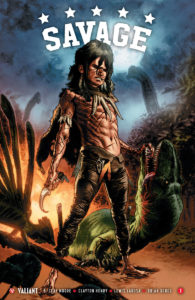 Fifteen years ago, the world’s most famous soccer star and his former supermodel wife – with their newborn child – disappeared without a trace. The world believes they are dead… But, in reality, their private jet crash-landed on a mysterious, unknown island ruled by prehistoric creatures from another time…

The first few pages of this book are silent – it’s a boy, maybe early teens but already a warrior, stalking and fighting a dinosaur for the eggs. It’s a brutal fight, but with the economy of someone who has done this again and again before now. Beautifully rendered art by Lewis Larosa, this is the fight and aftermath of someone born to do this exact kind of work to survive. It’s rough, and energetic, and anything but pretty.

Then we see a flashback of a soccer (football to the rest of the world) star heading for the States with his wife and new baby.  Clayton Henry’s art gives you a feeling that all is civilized and normal in this world. From the brief exchange between the couple, you get that he’s not all he used to be on the playing field, and has found a new hobby in drinking. You can tell that she loves him but is frustrated by him. As his manager as well as his wife, keeping him focused on his career is important. Then their private jet goes down and they have to swim to safety.

The island they find seems safe, but soon they are running out of salvaged tins of food and have to search. As Veronica is feeling feverish, Kevin searches the island and finally sees one of the ancient inhabitants – A fierce velociraptor with dangerous claws and so many teeth!

The storytelling here is stellar. Moore works well with the styles of both artists, who are in turn really amazing at what they do.  Larosa is the yin to Henry’s yang – the demarcation between savage and civilized, yet they work together as a story – you just know that Larosa loves dinosaurs with all the subtle detail involved in the opening fight, and Henry’s beautiful civilization is all manicures and vodka tonics.  Moore deftly tells both sides of the story with equal skill and energy.  Brian Reber’s colors are amazing, giving the island a tropical feel in both day and night.

As a brand-new character to the Valiant Universe, this story feels just organic enough, and then the fantastic touches elevate it to a modern epic. Wishing them much success with this book that they might find a way into the ongoing series it deserves. 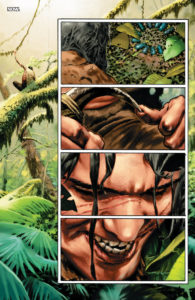 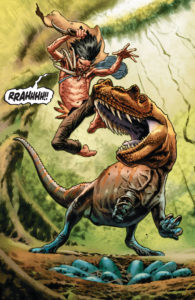 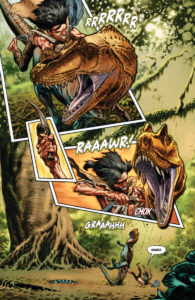 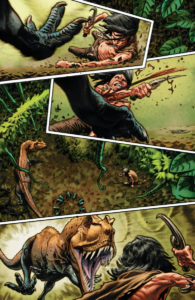 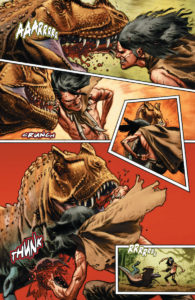 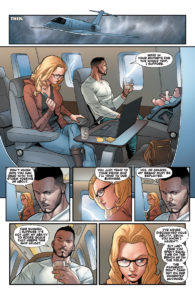 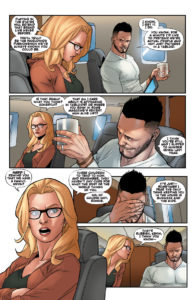 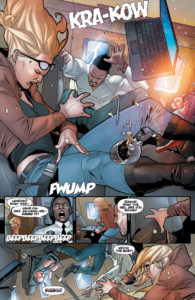 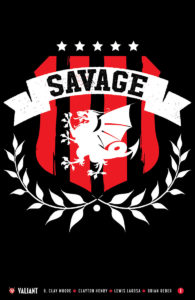 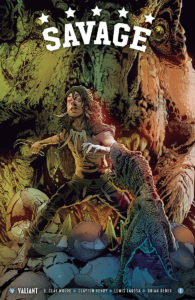 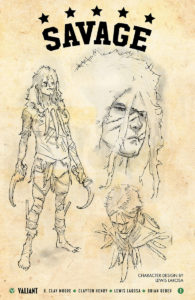 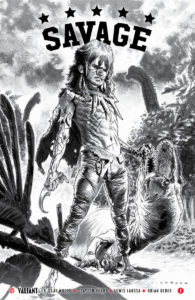