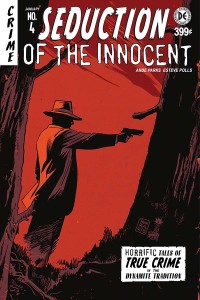 This is the big one.

If you’ve been reading this series all along (and you should have been), you’ll know that 1953 FBI agent Jennings, the “new guy,” has been in town less than a week. Mob bosses are dying. He’s put on the case to find the children who escaped when their mob boss father and mother were killed. He tracks the kids down and they put their trust in him. The guys doing the killing are a Nazi brother team. He finds that not all FBI agents are on his side, the side of right. In this final issue, he’s in a car with the kids and his partner.

Ande Parks wraps up this story in vivid detail, yet in the best style of an old crime drama where there’s a story not told. There’s no victory without a loss, and that’s the case here as well. We finally see the circle started in issue one finally completed. Jennings’ journey from shiny new agent to his breakdown in this issue give a stark face to just how brutal and uncompromising this life can be. Parks’ period crime graphic novels are just enough bitter reality to leave that taste in your mouth, craving a little more.

The gritty art of Esteve Polls manages to show the terror of the children and other innocent bystanders, the stoic emotion of the FBI agents, and the coldness of the terrorists. Jennings visually crumbles, page by page.  Like the story not told, the part of the story left unseen makes just as strong an impression as the horrors you do see.  Polls’ strong lines and Bogart-like style finish this off like some of the best crime dramas of a bygone era.

You’re left at the end wondering if Jennings is going to be all right after this case, and the answer is “probably not.” This is the beginning of the end for him, not so much a Seduction of the Innocent as a Demolition. Jennings will never be the same, and neither will we.