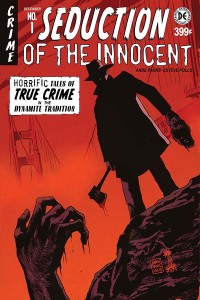 Gritty, sometimes depraved crime fiction in the tradition of James Elroy, Jim Thompson and EC-era crime and horror comics, from the team that brought you The Death of Zorro and The Lone Ranger.

Seduction of the Innocent is set in 1953 San Francisco, before rock and roll music and JFK popularized the “no hat” look for men. New FBI agent Jennings is a young married man from the Midwest who got this job on his entusiasm and good aim. He’s about to learn what being a field agent is all about in the middle of a wave of crime boss killings. Ande Parks is very in touch with that nice guy, letting the reader feel his quiet calm, his anxiety as fatherhood approaches, and his revulsion at the brutality of the murders he is investigating. The other characters, from the hardened FBI agents to victim’s families to the ruthless killers, haven’t stepped far out of their sterotypical shells yet. Now that issue #1 has set the scene and we know our players, I’m just waiting for the rest of the story to unfold.

Parks knows his true crime stories. He might know gangsters too; I’ve never asked him. If you’ve read other things he’s written, such as Union Station or the stellar Capote in Kansas, you know this is his comfort zone. He slides on the crime slippers and walks a bouncy walk in them for a while, has a few drinks, and slides them off again. His men are real men, and you can almost hear Joe Friday’s voice coming out of the FBI Chief’s mouth around that smelly cigar. He can tell stories in this world as long as he likes, in my opinion. Just lock your doors before you go to sleep at night.

Much like his work on Lone Ranger, Esteve Polls’ work puts us in a world based in reality, with no fairytales or superheroics. These are serious men and women, and the art with its muted color scheme lets it unfold in a very natural, unfussy way. His storytelling has enough angles and shadows that are not only really great to look at in a chase scene, but also give interest to moments of conversation.

Franco Francavilla’s cover is vivid, graphic and menacing. The grit is so present, you can break your teeth on it. This could have been a crime comic cover from the 1950’s, but he’s done it in a way that there’s nothing dated about it.

Seduction is just everything I like about crime fiction – men in suits and hats, dames who can handle themselves, heroes with a vulnerable side, bad guys who maniacally think they’re right. It’s not necessarily the white hats against the black hats, and that’s what makes it real.