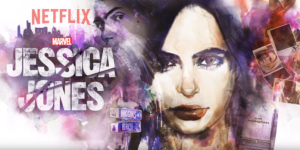 Having managed to binge through the first season of Netflix and Marvel’s second corroborative effort, I realized that there was a lot to take in. Sure, thirteen episodes of a series should carry a lot of baggage and impart a lot of information, but I didn’t realize how many layers Jessica Jones was going to be burrowing down into. Now that I’ve had the chance to process the opening season of the series, I can appreciate everything that went into it.

First of all, let me start out saying that Jessica Jones wasn’t a Marvel character I was particularly familiar with. I’ve only recently found myself sucked into the Alias series by Bendiss, and I know next to nothing of her previous super incarnation of Jewel. Most of my knowledge of Jessica as a character comes from her interaction with the other Marvel characters I am more up to speed on. I’ve been a huge fan of Daredevil for years, having cut my teeth on that character in the Frank Miller years, and even before that I was a young lad following the Heroes For Hire back in the 70’s (Power Man and Iron Fist were beyond cool).

So as a fan, I had the treat of learning about Jessica Jones from the ground up, and it was a great ride. An intense, often uncomfortable, ride that made the first season of Daredevil look pretty tame. If you’re watching this series with younger kids… holy crap, why are you letting younger kids watch this show? Turn it off and throw Guardians of the Galaxy or something on! We good? Okay… where was I?

Without giving up too many spoilers, I will say in advance that Netflix did not shy away from graphic content in any way. Jessica Jones is violent, disturbing on a psychological level, and there are numerous sex scenes that may not have revealed any outright nudity, but still managed to convey… well, sex. People are having sex on this show, and a few of them are having it a lot. That is, in fact, one of the biggest criticisms I’ve seen for the show in several online postings.

Minor spoiler ahead… Skip this next paragraph if you’re not interested.

Jessica Jones and Luke Cage hook up. Anyone who’s read any of the newer comics, anything involving Daredevil, Luke Cage, even the Avengers, knows that these two end up together. They get married, they have a kid, the whole domestic bliss thing. This show on Netflix doesn’t have any of that. This is the starting point for these characters, as far as any future connection goes. Jessica, beautifully played by Krysten Ritter, is a survivor of some pretty horrible things, and she’s got the Post-Traumatic Stress Disorder (PTSD) to show for it. Her abrasiveness, her alcohol abuse, and yes her… um… enthusiastic sexual attitude all show the compulsive and addictive behaviors fairly common in PTSD. Further, and I have my wife to thank for this insight, when Jessica and Luke “hook up”, we’re seeing two people with powers, who have spent their lives holding back to protect everyone around them, and are finally given the chance to cut loose, consequences to the furniture and drywall be damned.

Sure, Luke Cage (Mike Colter, pretty much perfectly cast) plays a significant role in Jessica’s series, almost more so than I was initially expecting, given that he had a series of his own on the horizon. The other man in Jessica’s life definitely takes center stage in the person of Killgrave (Marvel readers might know him better as “The Purple Man”), and as he’s played by David Tennent he brings the show’s most cringe-inducing moments. Whovians, beware… Mr. Tennant has NOTHING to do with The Doctor’s happy go lucky character in his portrayal of an amoral psychopath with the power of mind control. He says it, you do it. The horror of this comes into play when we see just how petty and casually vicious Killgrave is, and with the realization that the people who are victim to his control are all too aware of their actions, but absolutely powerless to stop them. Some of these scenes would have been right at home in movies like Se7en or Silence of the Lambs, and here they are being added to the Marvel Cinematic Universe alongside GofG, Captain America, and Iron Man.

Okay, so dark… violent… sexually promiscuous and energetic… and completely in keeping with the stories Marvel and Netflix started out telling in season one of Daredevil. Bad things happen in the world, and they aren’t limited to megalomaniacal robots sending whole cities into the upper atmosphere. Ordinary people are murdered, beaten, and raped every day, and the Avengers can’t be around to stop it all. Enter the second stringers, the street level heroes who are more or less just folk hoping to get through the day. While they can perform amazing feats, they’re still struggling to make ends meet. They don’t have an agency like SHIELD stepping up to foot the bills or set them up in a headquarters full of support staff. Jessica Jones is running a private investigator service out of her apartment, and she spends most of the show with a busted door and no window.

In all of my shining praise, don’t get the impression that I was completely without complaint… For my taste, there were a few episodes in the middle that sort of dragged things out a little too long. I felt that Killgrave was fully introduced/revealed a little too soon. If they could have spent a few of the starting episodes establishing Jessica, followed her through a couple cases as a P.I. and built Killgrave up a little more in the flashes of Jessica’s PTSD induced hallucinations, the story could have developed a little more naturally. As it is, we’re given more of a token glance at Jessica’s career choice, and her first case leads her right into the reveal that Killgrave is back in town. It could have established some points earlier on through more of a “show, don’t tell”, letting us watch Jessica at work as opposed to resorting to dialogue later on.

The bottom line, Jessica Jones takes another step into the more “realistic” and less cosmic world told in the pages of the “Marvel Knights” books. If you’re looking for a show with a bright and sunny outlook on the comic book world, best to keep to the shows like The Flash and the upcoming Legends of Tomorrow (or just use them as a palate cleanser when Killgrave’s antics get to be a little too much). Jessica Jones takes a deeper look into a very messed up world, through the eyes of a very messed up and damaged individual. By her own admission, Jessica isn’t always very likeable. She’s just a person uniquely qualified to do what needs to be done. She isn’t happy about it, but in the end what choice does a girl have?

If I haven’t totally put you off to the idea of watching Jessica Jones, I think you’re going to be in for a great ride. Step on in with your eyes open, and remember that this really is a great time to be a comic book fan. I think the best is still down the road. 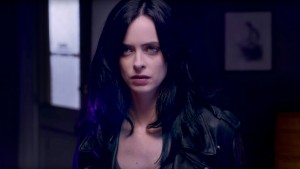 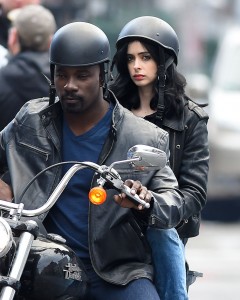